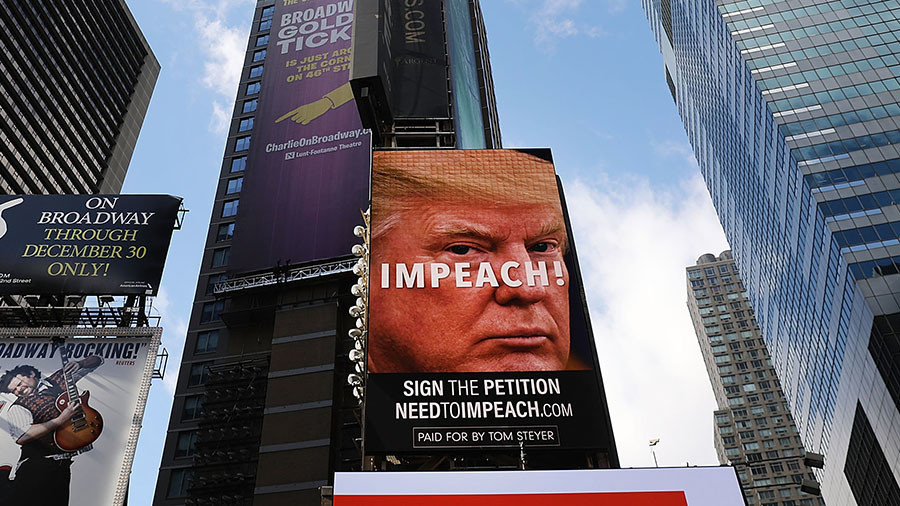 For 10 minutes out of every hour through to New Year’s Eve, billboards on Times Square will direct passers-by to a website where they can sign a petition calling for US President Donald Trump’s impeachment.

Over 350,000 people walk across Times Square each day, one of the busiest pedestrian zones in the world. It will only get busier on New Year’s Eve, when up to a million people will go to watch the countdown. They might also catch a glimpse of the billboards paid for by billionaire Democratic Party donor Tom Steyer. The billboards direct their viewers to Steyer’s website, needtoimpeach.com, where they can sign a petition asking Congress to take action against the Commander-in-Chief.

“We’re putting a couple of large billboards in Times Square calling for the impeachment of the president,” Steyer, who put $20mn toward the campaign, told Bloomberg on Monday. “We legitimately feel that this is the huge issue in front of the American people that no one is standing up for what the overwhelming number of Americans think.”

Steyer, a former hedge fund manager who has since turned his focus to environmentalist causes like fighting climate change, has already run a series of TV ads in which he called the Trump administration a “clear and present danger” that threatens to drag the United States into a nuclear war. The ads ran on Fox News’ Fox & Friends show, known to be a favorite program of the president, prompting a response.

“Wacky & totally unhinged,” was how Trump described Steyer on Twitter.

Although over 2,650,000 have signed the petition for Trump’s impeachment so far, senior Democratic leaders like Nancy Pelosi have reportedly told Steyer that they consider his campaign a distraction from the party’s overall political strategy.

Opponents of Trump’s controversial presidency have long called for his impeachment, accusing him of colluding with the Russian government during the 2016 presidential election campaign, among other things. However, no clear or definitive evidence of such collusion has yet been found.

Last week, six Democrats in the House of Representatives, including two sitting on the House Judiciary Committee, introduced articles of impeachment. They singled out five of President Trump’s acts which they believe to be impeachment-worthy, including the firing of FBI Director James Comey.