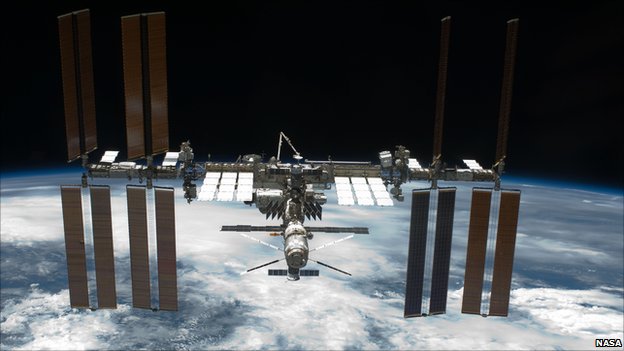 A piece of debris has narrowly missed the International Space Station (ISS), forcing its six crew members to go to their escape capsules and prepare for an emergency evacuation back to Earth.

The crew were given the all clear to return to work minutes after the object passed by at 1208 GMT.

The junk was of unknown size but experts say even a small object could do considerable damage to the ISS.

The US space agency's (Nasa) Associate Administrator for Space Operations, Bill Gerstenmaier, said it was the closest a debris object had ever come to the station. An analysis was now under way to try to understand its origin, he added.

"The crew was told to take their places aboard the Soyuz spacecraft."

Soyuz capsules are used to ferry crew to and from the orbiting platform, and enough vehicles are always present so that they can be used as "lifeboats" if an emergency arises.

Before getting into the capsules, the crew closed all the hatches on the ISS.

The ISS is currently manned by three Russians, two Americans and a Japanese astronaut.


A Russian official said that only 10% of all objects in Earth's orbit are satellites, while the rest is rubbish: spent rocket stages, defunct satellites, acceleration blocks and other debris.

Scientists estimate that there are more than 300,000 junk fragments in space of up to 10cm (four inches) in length, but there are many millions more pieces that are smaller.

Even fragments a few centimetres in size are a hazard because they travel at many thousands of kilometres per hour.

Normally, the station can be moved out of the way of a piece of junk, but this alert was raised too late for such a manoeuvre.

Three crew members were forced briefly to evacuate the space station in an incident in March 2009.

The station is a $100bn project that has been under construction about 220m (350km) above the Earth since 1998. Five partners are involved - the US, Russia, Japan, Canada and Europe (10 nations coordinated through the European Space Agency).