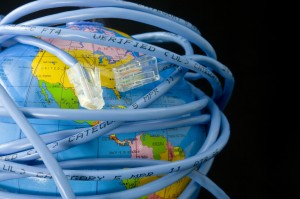 Internet service providers (ISPs) across the United States are set to voluntarily begin a digital surveillance operation so large that nothing can even come close in the history of espionage.

Starting on July 12, 2012, if you download software, videos or music which are potentially protected by copyright, you very well might find yourself targeted by any of America’s behemoth ISPs.

After that date, some users might find their bandwidth choked off completely until they sign some kind of agreement saying that they will not download materials which are potentially protected by copyright.

The RIAA and MPAA have been making a concerted effort to stifle internet freedom under the guise of fighting piracy across the world, largely with the help of the government of the United States.

This latest announcement is likely related to the Anti-Counterfeiting Trade Agreement (ACTA) which was signed by ... without any input from the people of the United States whatsoever.

The seemingly arbitrary July 12 deadline was announced by RIAA CEO and star lobbyist Cary Sherman to a conference in New York, according toCNET.

The digital surveillance operation is dubbed a “graduated response” scheme since supposedly users will have a bit of leniency afforded to them upon their first alleged infraction.

ISPs including AT&T, Time Warner Cable (which I myself am unfortunately forced to use due to a near monopoly in my market), Comcast, Cablevision, and Verizon, will be spying on the activities of users in an attempt to spot potential copyright infringement.

As I have previously pointed out, this would require something known as “deep packet inspection” wherein literally every bit of data is analyzed by the ISP.

For many people, this represents nothing less than an egregious and unacceptable breach of privacy, especially since people are monitored even when they do absolutely nothing wrong.

The so-called “graduated response” scheme, also known as the “six-strikes” plan goes something like this:

CNET reports that ISPs have the option to skip the so-called “mitigation measures” and as of yet none of the major providers have publicly committed to cutting off internet access completely.

However, if the massive (and arguably undue) influence of the RIAA and MPAA continues to sway the big industry players, I wouldn’t be surprised if they started cutting off the internet access of users for supposedly repeatedly sharing files which might by under copyright.

This is a fantastic way for ISPs and the entertainment industry to circumvent the failed attempts to pass the PROTECT IP Act (PIPA) and the Stop Onli... and perhaps even go beyond what this legislation could be capable of.

The entertainment industry is clearly enthused by the prospect of monitoring every single bit of data transferred between internet users, evidenced by the fact that they will pay most of the costs involved in the project.

The Electronic Frontier Foundation (EFF), on the other hand, points out that the “graduated response” protocol is non-transparent and that copyright holders could exploit ISPs to target individuals even in cases where their claims might not be valid.

The EFF is also attempting to get ISPs to agree to claim reviews being conducted by a neutral third party as well as giving internet users a kind of “due process” before having their bandwidth throttled or being disconnected entirely.

For some, having their internet connection throttled heavily or cut off completely could mean a major business setback, income loss, etc. and without some semblance of due process involved it would be very easy for the media giants to wreak havoc on Americans who work from home based on alleged copyright infringement.

The EFF similarly pointed out that the defenses provided to users against a claim of copyright infringement leave quite a bit to be desired.

Users are given only six predetermined defenses, “and even the six enumerated defenses are incomplete,” according to the EFF.

“For example, the ‘public domain’ defense applies only if the work was created before 1923 — even though works created after 1923 can enter the public domain in a variety of ways,” the EFF explained.

There has yet to be a coordinated outcry from the technology sector as there was in response to SOPA and PIPA, leading to blackouts and boycotts of the legislation’s supporters.

Hopefully we will see something similar, although honestly I would be surprised if companies like Google came out against this since this could be such a boon for government surveillance and Google has close government ties which just seem to get tighter.

I see this program as having the potential to be much more sinister than it seems, especially since the automatic monitoring of internet activity requires an incredibly intrusive process like deep packet inspection.

This could also be used to better track the internet activity of people who oppose the actions of the government of the United States, under the guise of combating domestic terrorism.

In a nation where just about anything can make you into a suspected terrorist in the ..., I would truly be surprised if they didn’t leverage this to their advantage.

Worst of all, if the data collected by this system is stored indefinitely – which it seems it will be since they need to identify alleged repeat offenders – it could be used as yet another private sector partner for the United States government’s Big Brother activities. However, this would makemethods of intelligence collection like Google and Facebook (which has been busted spying on private text messages of users) seem like the equivalent of the now primitive manual eavesdropping.

Hopefully this plan can see widespread opposition leading to boycotts and massive financial pressure on the gigantic ISPs participating in the program. Perhaps if we can identify the internet service providers who refuse to take part in the program and show them our support by patronizing them, the biggest ISPs will take note and back away from the scheme.

If you know of any ISPs who have come out publicly against this or voiced their opposition in one way or another, please make me aware of this by emailing me at Admin@EndtheLie.com.

I would love to help promote such an effort but currently I am unaware of any alternatives, especially in my area where I have the choice of either no internet or Time Warner Cable or paying exorbitant fees to get Verizon hooked up but since Verizon is taking part as well, it would be completely pointless.

Help us push back against this unbelievably massive domestic surveillance apparatus and spread the word!

Perhaps we should all put the pressure on Microsoft and Apple (and other computer and accessory manufacturers)  by not being eager to buy their computers, iPads, or cell phones and impact their income. Get CB radios and linear amplifiers for communication. We need Ron Paul in the white house to avoid all of this insanity, and then vote Rand in after Ron has served as long as he can or is allowed.