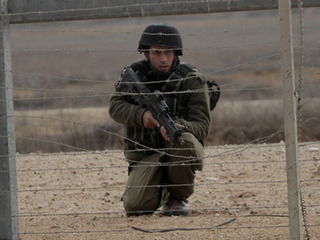 Following the ceasefire between Hamas and Tel Aviv, many Israelis are “frustrated” by the PM’s decision to end the assault on Gaza. But the truce proves Israel wants stability and peace, Alex Selsky, a spokesman for the Israeli PM’s office, told RT.

He argues that Prime Minister Benjamin Netanyahu’s decision not to escalate the conflict into a ground invasion is basically peace.

“The fact that the PM stopped the operations proved that we don’t want to invade,” Selsky elaborated.

RT: Some of your government colleagues say the Palestinians are to blame for today's violation of the ceasefire – but why did the Israeli military use deadly force against civilians, once again? Was there no other option?

Alex Selsky: Well, the principle is very, very simple – we want to be quiet and if it will be quiet from the terrorists – from Gaza – it will be met by quiet from Israel. But if it will be a violation, and if we see rockets – and we have seen rockets after the ceasefire, so called – then we will respond, and we’ll respond to bring safety to our citizens again, and that was the goal of the operation.

AS: But you’re not telling that now. Anyway, I just want to repeat it very simply: quiet will be met by quiet. If there will be violence again, Israel will do everything to defend its citizens.

RT: Was it not expected that there would be some sporadic incidents like this though, I guess … it’s not an ideal world, is it?

RT: Six Israelis were killed by rockets from Gaza during the conflict. Have your government and military done enough to make sure that no more rockets are fired at your cities? Are you happy with the Iron Dome system?

AS: First of all, we’re very happy with the system – it does a very good job, even though that 5-10 per cent of rockets that we cannot stop – these are rockets that fall on our citizens, so even one rocket is one rocket too much. So we hope that quiet will last… that we’ll not need to use our force again. All we need, all we want, all we dream for is stability and working, and that our children will go to school. We don’t want any force, and it proves that we did not go any further with the ground operation. We stopped at the moment that we thought we could achieve quiet. We don’t want war, we don’t want to get in with tanks and to get in with our troops. We don’t want to hurt the civilians in Gaza. We just want quiet, that is all.

RT: Hamas claims the ceasefire as a victory, while some Israelis are now criticizing the Prime Minister for not wiping out the threat. How concerned are you about the Israeli government's reputation after this?

AS: Definitely, there are many people in Israel that think that the prime minister should get more of this operation going, the ground operation. Because these people don’t believe that Hamas will really stop firing rockets, and unfortunately people in Israel cannot believe that the international community can pressure and enforce this ceasefire. And that is why people are so frustrated that the prime minister has stopped the operation. But the fact that the PM stopped the operations proved that we don’t want to invade, we don’t want to hurt, and we just want stability and peace. And I’m sure that if the quiet will be long, the people of Israel will feel it and understand that this is enough. We don’t want to use force, we just react to force. We just want stability and peace and working – we do it very well. Israel is a very successful economic developed state…

RT:…And of course the underlying tensions are still there and are not going away, aren’t they?

AS: We love working, and we would like to work more.

RT: Iran is an interested party in all this, and some officials there say Israel has shown weakness by letting Hamas off the hook. How concerned are you with Tehran's reaction?

AS: Well, first of all, I don’t think that Israel was weak. Israel did what it thought it needed to stop the rockets, but Israel is not an aggressor, and Israel does not use force when it is not needed. When we feel quiet, we met it with quiet, and that is in every case. And believe me, throughout the last years, there were so many times that Israel was expected to react intensively, but we did not do so, because we really believe that the international community will do so – and we did very surgical attacks on terrorists, and even now, we did surgical attacks on terrorists. We don’t want to use force more than we need, and that is in every, every case. Just let us live in peace and we will not use force – believe me.

RT: But even with these surgical attacks – we heard that word described a lot over the last couple days – there were dozens of Gazan civilians, killed including 37 children. Will anyone in your government, your military, be held accountable for those deaths?

AS: Definitely! And we’re really sorry for those deaths, but you should know that Hamas terrorists hide behind civilians, they fire rockets from schools, they hide their rockets in hospitals, they use apartments of people in order to fire rockets on our civilians. You know, when we hurt civilians, we really regret that. But Hamas targets our civilians, they see victory in hurting our civilians. When we do it, unfortunately, we’re really sorry and we see a failure in that, and believe me. We call upon civilians – and we do it every time, before every strike. We call upon civilians not to be around the terrorists and not to let the terrorists use the civilians and then nobody will be hurt. We want to target and hurt only those who fire rockets on us.

RT: There were accusations in the last couple of days, before the ceasefire, that UN had allowed shootings from its buildings into your territory. That was hotly denied by the UN spokesman last night. Do you still stand by your accusations?

AS: I do not know what you’re talking about exactly.