Judge to announce sentence for Manning on Wednesday; faces up to 90 years for leaking secrets 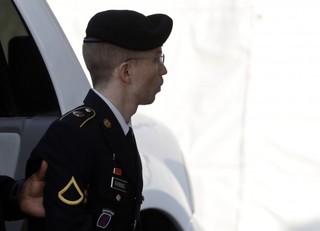 Army Col. Denise Lind said Tuesday she was still deliberating but she was confident she would have a sentence by Wednesday morning.

“At 10 a.m. tomorrow I will announce the sentence,” Lind said about 2 1/2 hours into her deliberations.

Manning faces up to 90 years in prison for leaking more than 700,000 Iraq and Afghanistan battlefield reports and State Department diplomatic cables in 2010 while working as an intelligence analyst in Iraq. He also leaked video of an U.S. helicopter attack in Baghdad in which at least nine people were killed, including a Reuters news photographer and his driver.

Prosecutors have asked for at least a 60-year prison term. Capt. Joe Morrow said in his closing argument Monday that a long prison sentence would dissuade other soldiers from following in Manning’s footsteps. The defense has suggested a prison term of no more than 25 years, so that Manning, 25, could rebuild his life. Defense attorney David Coombs asked for a sentence that “doesn’t rob him of his youth.”

Prosecutors have requested a far longer prison term than other soldiers have received in recent decades for sharing government secrets.

Army Spec. Albert T. Sombolay got a 34-year-sentence in 1991 for giving a Jordanian intelligence agent information on the buildup for the first Iraq war, plus other documents and samples of U.S. Army chemical protection equipment. Marine Sgt. Clayton Lonetree, the only Marine ever convicted of espionage, was given a 30-year sentence, later reduced to 15 years, for giving the Soviet KGB the identities of U.S. CIA agents and the floor plans of the embassies in Moscow and Vienna in the early 1980s.

U.S. civilian courts have ordered life in prison for spies, including Aldrich Ames, a former CIA case officer convicted in 1994 of spying for the Soviet Union and Russia and former FBI agent Robert Hanssen, convicted in 2001 of spying for Moscow. 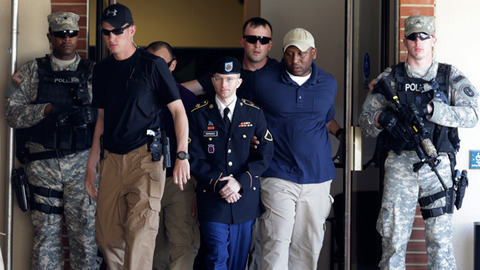 Military prisoners can earn up to 120 days a year off their sentence for good behavior and job performance, but must serve at least one-third of any prison sentence before they can become eligible for parole.

Manning will get credit for about 3 1/2 years of pretrial confinement, including 112 days for being illegally punished by harsh conditions at the Quantico, Va., Marine Corps brig.

Under military law, the verdict and sentence must be reviewed — and may be reduced — by the commander of the Military District of Washington, currently Maj. Gen. Jeffery S. Buchanan. Besides the court-martial record, Manning’s defense team can submit other pieces of information in a bid for leniency.

If Buchanan approves a sentence that includes a bad-conduct discharge, a dishonorable discharge or confinement for a year or more, the case will be automatically reviewed by the Army Court of Criminal Appeals.

Further appeals can be made to the military’s highest court, the U.S. Court of Appeals for the Armed Forces, and the U.S. Supreme Court.

This is a sad day for us American people when someone comes & tells the TRUTH & ends up like this! OMG!~