Wikileaks founder Julian Assange said this morning in an exclusive interview with ABC News’ George Stephanopoulos on “This Week” that there is no stopping the release of additional NSA secrets obtained by Edward Snowden, a former contract employee of the organization.

“There is no stopping the publishing process at this stage.  Great care has been taken to make sure that Mr. Snowden can’t be pressured by any state to stop the publication process.  I mean, the United States, by canceling his passport, has left him for the moment marooned in Russia.  Is that really a great outcome by the State Department?  Is that really what it wanted to do?” Assange said, speaking from the Ecuadorian embassy in London.

“I think that every citizen has the right to their citizenship,” he continued. “To take someone’s principal component of citizenship, their passport, away from them is a disgrace.  Mr. Snowden has not been convicted of anything.  There are no international warrants out for his arrest.  To take a passport from a young man in a difficult situation like that is a disgrace.”

Snowden is currently believed to be in the transit zone of a Moscow airport, after fleeing Hong Kong last week. He faces espionage charges in the United States for leaking information about government surveillance programs.

TIMELINE: Edward Snowden’s Life as We Know It

The Obama administration has called for Snowden’s extradition back to the U.S. and the State Department recently revoked his passport. He is currently believed to be seeking asylum from other countries, and is receiving counsel from Assange and Wikileaks.

This morning on “This Week,” Assange told Stephanopoulos that the Wikileaks legal team has “been in contact with Mr. Snowden,” and praised the 30-year-old leaker.

“He is a hero.  He has told the people of the world and the United States that there is mass unlawful interception of their communications, far beyond anything that happened under Nixon.  Obama can’t just turn around like Nixon did and said, it’s OK, if the president does it, if the president authorizes it,” he said.

The United States has asked other countries to turn down Snowden’s requests for asylum. But world leaders have pushed back against that request, with Russian President Vladimir Putin calling Snowden a “free person” and allowing him to stay in a Moscow airport.

Assange acknowledged the diplomatic sensitivity of the situation, calling it “a matter of international diplomatic negotiations.”

On Friday Vice President Joe Biden spoke to the president of Ecuador and asked him not to grant Snowden asylum. Assange called that phone call unacceptable. 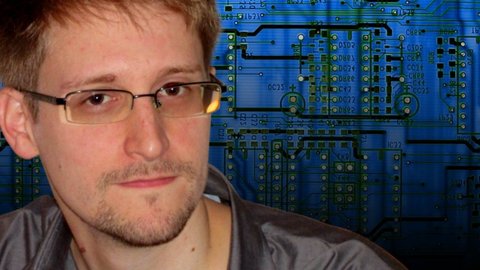 “Joseph Biden the day before yesterday personally called President Correa, trying to pressure him.  That’s not acceptable.  Asylum is a right that we all have.  It’s an international right.  The United States has been founded largely on accepting political refugees from other countries and has prospered by it.  Mr. Snowden has that right.  Ideally, he should be able to return to the United States,” he said.

Snowden’s father, Lonnie Snowden, has also called for his son to return to the U.S. and raised questions about Assange’s  involvement, saying, “I think WikiLeaks, if you’ve looked at past history, you know, their focus isn’t necessarily the Constitution of the United States. It’s simply to release as much information as possible. So that alone is a concern for me.”

Assange told Stephanopoulos there is “little that I can productively say” about the status of Snowden, who is presumed to still be in a Russian airport.

Wikileaks has also faced criticism for their release of many classified government documents. In aleaked email published by “Time” magazine in 2010, Assange is quoted as writing that Wikileaks’ revelations are intended to bring about “the total annihilation of the current U.S. regime.” When asked if this was still his goal, Assange denied that the email existed.

“I did not say that and there is no such email,” he said. “That quote is simply false.”