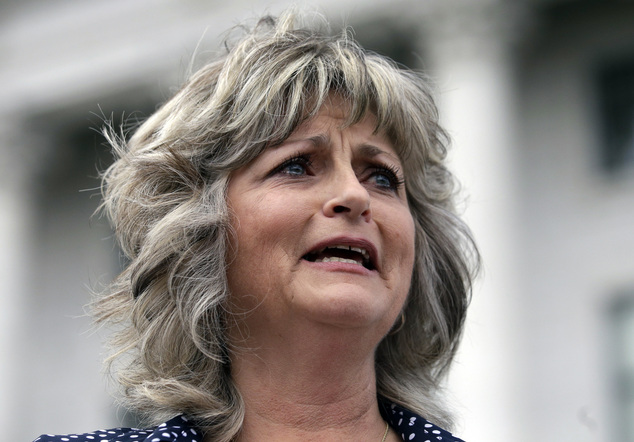 Leaders of an armed occupation of a federal wildlife refuge in rural Oregon were driving to a public meeting a year ago when police shot and killed one of them at a roadblock.

Now, LaVoy Finicum's widow and their children are planning to hold that meeting later this month in the same town, John Day. Speakers are slated to talk about the Constitution, property rights and other issues.

"It is the anniversary of my husband's death. We want to continue with his mission," Jeanette Finicum told The Associated Press. "The people within counties and states should decide how to use those properties, not the federal government."

LaVoy Finicum was the spokesman for several dozen occupiers during the 41-day takeover of the Malheur National Wildlife Refuge and has become a martyr for the movement to transfer ownership of federal lands to local entities. The U.S. government owns nearly half of all land in the West, compared with 4 percent in other states, according to the Congressional Overview of Federal Land Ownership.

Jeanette Finicum has become something of a cause celebre in the year since her husband's death. She spoke at a rally on the steps of Utah's capitol. The Tri-State Livestock News, based in South Dakota, recently ran a story describing her dispute with the Bureau of Land Management over grazing fees. The agency administers 245 million acres of public lands and manages livestock grazing on 155 million acres of those lands.

"It's been a horrific year," Jeanette Finicum said in a phone interview from her Cane Beds, Arizona, home. "There's been so much going on that most people don't have to deal with when they lose a loved one, like we did."

She met LaVoy at a barn dance. He told her he was a bad dancer.

"He was right. He had no rhythm," Jeanette Finicum said with a laugh. They got married 14 days later.

"There isn't anyone like him that I met in my lifetime, and I don't expect there will be anyone else who will measure up," she said, choking up with emotion.

She was a stay-at-home mom all 23 years they were married.

"With him gone, all of the responsibilities have fallen to me," she said. "I spent the year rounding up, branding and calving."

Oregon State Police shot LaVoy Finicum three times on Jan. 26, 2016, after he exited a vehicle at a police roadblock in the snowy Malheur National Forest, held up his hands and then reached toward his jacket.

Authorities concluded the officers were justified because they thought Finicum was going for his pistol. But at least one FBI Hostage Rescue Team operator fired two shots at Finicum's vehicle — shots that were not disclosed during the investigation.

Jeanette Finicum insists her husband was not a threat and that he was murdered. Her lawyer has said the family plans a wrongful-death lawsuit, and Finicum said she will release more details during the Jan. 28 meeting.

It's being held at the fairgrounds in Grant County, which neighbors the county containing the refuge.

Public lands make up 66 percent of Grant County's 4,529 square miles. Jeanette Finicum bristled when asked if those attending the meeting might be inspired to take over federal sites.

"That's a ridiculous question," she said. "We will peacefully demonstrate, peacefully teach and stand for liberty."

Fairgrounds manager Mindy Winegar said local logger Tad Haupt rented a pavilion for the meeting that seats up to 500 people. Haupt, a vocal opponent of U.S. Forest Service management practices, is the one who invited the occupation leaders to speak in John Day, a town of about 1,700, on Jan. 26, 2016.

The FBI expressed no concern about the upcoming meeting.

"Everyone has a constitutional right to assemble, and to free speech," spokeswoman Beth Anne Steele said.

Grant County Judge Scott Myers granted permission for the fairgrounds, a county facility, to be used for the event, saying rejecting the request could have had more repercussions than allowing it to happen.

Myers said he doubts it will pose a threat but then added, "I have steadfastly tried to convince myself that over the past few months." In this Jan. 5, 2016 file photo, LaVoy Finicum, middle, a rancher from Arizona, talks to reporters at the Malheur National Wildlife Refuge near Burns, Ore. Finicum's widow, Jeanette Finicum, and their children are planning to hold a meeting in John Day, Ore., Jan. 28, 2017, in an effort to continue with his mission. 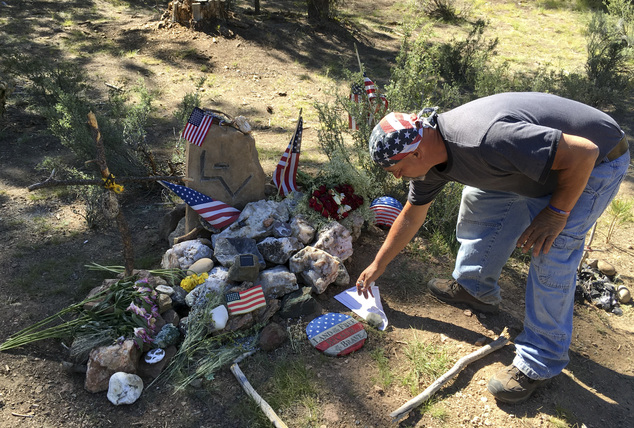 In a June 21, 2016 file photo, John Hildinger, of Corpus Christi, Texas, tends to a memorial for LaVoy Finicum at the spot where Finicum, one of the armed occupiers of the Malheur National Wildlife Refuge, was killed by police at a roadblock near Burns, Ore. Finicum's widow, Jeanette Finicum, and their children are planning to hold a meeting in John Day, Ore., Jan. 28, 2017, in an effort to continue with his mission. 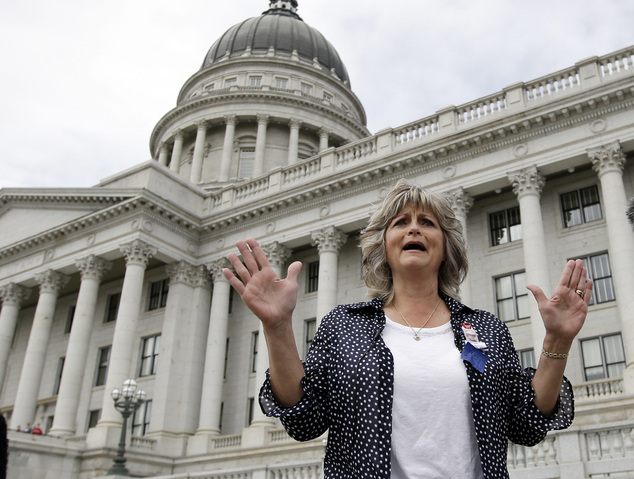 This Saturday, March 5, 2016, file photo, Jeanette Finicum speaks with reporters during a rally at the Utah State Capitol, in Salt Lake City. Finicum, the widow of an Arizona rancher LaVoy Finicum, killed by FBI agents in a Jan. 26, 2016, traffic stop in central Oregon, is planning to hold a meeting in John Day, Ore., Jan. 28, 2017, with their children, in an effort to continue with his mission. 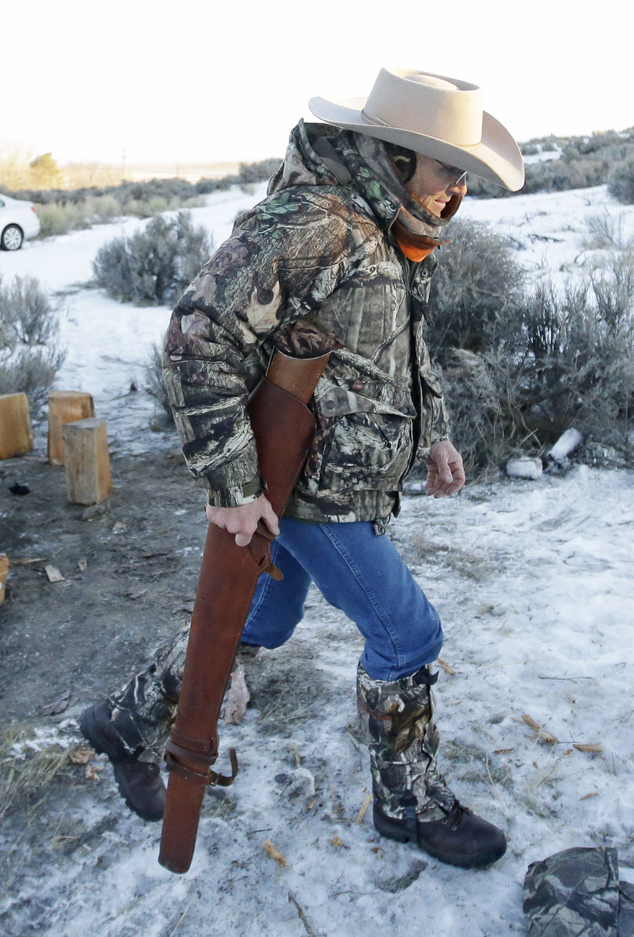 In this Jan. 6, 2016, file photo, Arizona rancher LaVoy Finicum carries his rifle after standing guard all night at the Malheur National Wildlife Refuge near Burns, Ore. Finicum's widow, Jeanette Finicum, and their children are planning to hold a meeting in John Day, Ore., Jan. 28, 2017, in an effort to continue with his mission.
http://www.dailymail.co.uk/wires/ap/article-4122124/Widow-slain-Ore...

Jeanette Finicum,"It is the anniversary of my husband's death. We want to continue with his mission,". "The people within counties and states should decide how to use those properties, not the federal government."