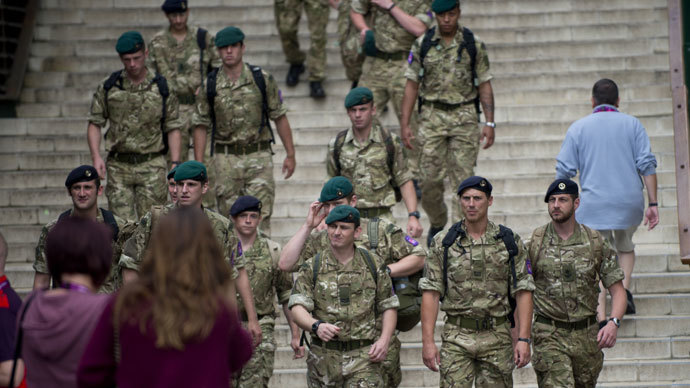 The UK's Ministry of Defence (MoD) has reportedly thrown away millions of pounds, "equivalent to the annual salary of 1,000 troops", on a crippled computer system impeding Britain’s ability to recruit soldiers, leaked documents have revealed.

The Recruitment Partnering Project (RPP), a 1.3 billion pound ($2.1 billion) scheme designed to enable the army to recruit online, is currently nearly two years behind schedule and will not be fully operational until April 2015, The Times reported, citing leaked MoD documents.

While according to the newspaper some 15.5 million pounds ($25 million) has already been spent on the computer system for the pricey project, things went wrong to the point where ministers are considering spending nearly 50 million pounds ($81 million) on a solution, it turned out.

Another confidential report seen by The Times and delivered by an IT research company hired by the Army, Gartner, concluded that the Army's recruitment wing chose the wrong partner to build the IT system after failing in 2011 to challenge an MoD policy that favored the less suitable of two competing offers. According to the report, the company's project management team was"inexperienced and under-resourced," and when delays started, the Army allegedly failed to implement a viable contingency plan, so the costs multiplied.

The delay reportedly led to recruitment targets for regular soldiers and reservists to be missed and applications to be lost in the system. As a result, the Defence Secretary's ‘challenging’ plan to recruit more than 10,000 troops by 2018 has been under threat, The Times reported.

Under government plans, the Army is being cut from 102,000 to 82,000 by 2020, while the newly-renamed Army Reserve, formerly known as the Territorial Army, is being expanded from 19,000 to 30,000. According to a leaked MoD memo seen by the Telegraph in October, only 376 recruits joined the Reserve between April and June, missing a target of 1432. The Ministry of Defence building is seen in London.(Reuters / Suzanne Plunkett)

Philip Hammond was allegedly urged to pay the MoD's partner in the project the UK's leading provider of business process management and integrated professional support service solutions, Capita, over 47 million pounds ($77 million) to build a new IT platform.

According to The Times, a briefing note sent by the MoD's Director General of Finance to the Defence Secretary strongly recommended getting rid of the defected IT system and paying Capita to build a new model.

"If the ICT hosting solution is not put in place then the MoD risks not gaining the appropriate number of recruits needed. Given recent criticism of army recruitment … and the use of reserves, this would lead to further negative media reporting and reputational damage for MoD," David Williams warned in December.

Meanwhile, another briefing note seen by The Times informed that the MoD would face additional costs of 1million pounds per month until the IT problem was resolved. Soldiers march in a procession past the Cenotaph during the annual Remembrance Sunday ceremony in London.(Reuters / Suzanne Plunkett)

According to Shadow Defence Secretary Vernon Coaker, the leaked report attested to the "latest series of catastrophic failures at the Ministry of Defence on David Cameron's watch."

"[Opposition] Labour warned that the government was taking risks with Britain's security by not fixing the reserve recruitment crisis before reducing numbers in the regular army. We specifically raised the worrying IT problems and Capita's performance as causes for concern. But the government recklessly pressed ahead," the Guardian quoted him as saying.

"Now we learn that the problems were worse than anyone thought and still haven't been fixed. The blame for this latest fiasco – which is wasting 1 million pounds of taxpayers’ money every month – lies squarely with government. Philip Hammond needs to get a grip and sort this shambles out,"Coaker stated.

Meanwhile, an MoD spokeswoman told The Times that it had acknowledged "a number of problems" with the Army and Capita recruitment partnership.

"Ministers have gripped these problems and put in place a number of fixes to correct the issues that had emerged," she said.

"As we have previously said, in the medium-term we are building a new IT platform that will be ready early next year and in the short term we are introducing work-arounds [sic] and mitigation measures to the old IT platform to simplify the application process."