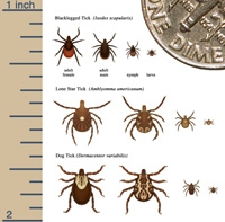 A tick-born bacterial disease that was first conclusively identified in 1975 and is named for the town in Connecticut, U.S., in which it was first observed. The disease has been identified in every region of the United States and in Europe, Asia, Africa, and Australia.

Lyme disease is caused by the spirochete (corkscrew-shaped bacterium) Borrelia burgdorferi. The spirochete is transmitted to the human bloodstream by the bite of various species of ticks. In the northeastern United States, the carrier tick is usually lxodes dammini; in the West, I. pacificus; and in Europe, I. ricinus. Ticks pick up the spirochete by sucking the blood of deer or other already-infected animals. I. dammini mainly feeds on white-tailed deer and white-footed mice, especially in areas of tall grass, and is most active in summer. The larval and nymphal stages of this tick are more likely to bite humans than are the adults and are hence more likely to cause human cases of the disease.

In humans the disease progresses in three stages. The first and mildest stage is characterized by a circular rash in a bull's-eye pattern that appears anywhere from a few days to a month after the tick bite. The rash is often accompanied by such flu-like symptoms as headaches, fatigue, chills, loss of appetite, fever, and aching joints or muscles. The majority of persons who contract Lyme disease experience only these first-stage symptoms, and never become seriously ill. A minority, however, will go on to the second stage of the disease, which begins two weeks to three months after infection. This stage is indicated by arthritic pain that migrates from joint to joint and by disturbances of memory, vision, locomotion, or other neurological symptoms. The third stage of Lyme disease, which generally begins within two years of the bite, is marked by crippling arthritis and by neurological symptoms that resemble those of multiple sclerosis. Symptoms vary widely, however, and some victims experience facial paralysis, meningitis, memory loss, mood swings, and an inability to concentrate.

Because Lyme disease often mimics other disorders, its diagnosis is sometimes difficult, especially when there is no record of the distinctive rash. The early treatment of Lyme disease by means of antibiotics )usually tetracycline for adults and penicillin for children) is important in order to prevent progression of the disease to a more serious stage. More powerful antibiotics are used in the latter case, though symptom may recur periodically thereafter. "Source. Encyclopaedia Britannica Article:

For more detailed information on this disease, visit CanLyme: http://www.canlyme.com/ticks.html