More than 50 people were killed and at least 200 others injured after a gunman opened fire Sunday night at a country music festival opposite the Mandalay Bay hotel and resort on the Las Vegas Strip, authorities said.

Police released the updated death toll in the early morning hours after a horrific night of violence that turned a concert into a scene of carnage. While initial reports put the death toll at 20, Las Vegas Metropolitan Police tweeted later that at least 50 were dead.

Police said the suspect, 64-year-old Stephen Paddock, a resident of Mesquite, Nev., was killed after a SWAT team burst into the hotel room from which he was firing at the crowd.

“Right now we believe it’s a solo act, a lone wolf attacker,” Las Vegas Metropolitan Police Sheriff Joe Lombardo said. “We are pretty confident there is no longer a threat.”

Authorities said the gunman appeared to have begun firing at 10:08 p.m. from the 32nd floor of the Mandalay Bay hotel toward the concert venue across the street.

Officers entered the room and engaged the suspect. “He is dead, currently,” Lombardo said, adding that authorities have no evidence of a motive. “We don’t know what his belief system was at this time.”

Police said they have succeeded in locating a woman, identified as Marilou Danley, who was believed to be traveling with Paddock and is listed as living at his address in Mesquite, about 80 miles northeast of Las Vegas. “We are confident we have located the female person of interest,” the department said on Twitter.

Mesquite Police officer Quinn Averett, a spokesman for the department, said about 10 Mesquite officers were at the home early Monday morning holding a perimeter.

Two of the dead may include a pair of off-duty police officers who were attending the concert, Lombardo said, and it appeared that another officer shot—with non-life-threatening injuries—was from Bakersfield.

“A tragic and heinous act of violence has shaken the Nevada family,” Gov. Brian Sandoval said on Twitter. “Our prayers are with the victims and all affected by this act of cowardice.”

University Medical Center spokeswoman Danita Cohen said the hospital was treating “many patients” with gunshot wounds in the wake of the shooting. There were so many that citizens were arriving at the emergency room with gunshot victims loaded into their cars, local media reported.

Authorities established a command post and triage center, and shut down parts of the Strip in the hours after the shooting. Hotel guests blocked from returning to their hotels were shuttled to a center equipped with metal detectors.

Police initially investigated reports of a “suspicious device” down the street, outside the Luxor Hotel, but said later there appeared to be no explosive devices related to the incident, other than that used by the SWAT team breaching the room where the suspect was located.

The shots appeared to be coming from an upper floor of the hotel, some witnesses said.


Video posted on social media showed the open-air concert fully underway when bursts of automatic gunfire rang out in rapid succession. Dozens of concertgoers dropped to the ground, screaming, while others ran, some in pairs or in groups with their arms linked.

The shooting went on for about more than 30 seconds before the music stopped, and another burst was heard later.

“Get down, stay down,” one woman shouted. “Let’s go,” another voice said. Another wave of gunshots followed soon after.

Seth Bayles, of West Hollywood, said Aldean had been performing for about 20 minutes when he heard shots.

“I thought it was like bottle rockets going off,” Bayles said. “Then we saw people dropping. We saw someone get hit and then we started running.”

Bayles said he was probably 50 feet from the stage when he heard the shots. “We saw people down all over the place.”

Bayles said Aldean was quickly pulled off stage, and soon after, the band was brought off as well.

Two men near the casino said they heard a helicopter with a bullhorn yelling “Go! Go! Go!” as the incident unfolded. Others said they saw police and SWAT teams streaming into the Mandalay Bay casino.

Bernice Allard, who came to the concert with her husband Frank Allard, said there was screaming when the shooting began. “Single shot. Single shot, then a lot of shots,” Frank Allard said.

Allard, 56, said he had come to see Eric Church and Sam Hunt and Jason Aldean, who was into his fourth or fifth song when the shooting began. He said the crowd began to stampede, and he grabbed a nearby fence, stretched both arms wide and tried to shield his wife from the danger. Then they ran.

“We followed the crowd out,” Bernice Allard said.

Alarm spread up and down the strip as news of the shootings spread.

Alfonzo Ewing had arrived shortly before midnight for the overnight shift as a cook at the White Castle at the Best Western Plus Casino Royale on the northern side of the strip, a little more than two miles from Mandalay Bay.

“We heard reports of gunshots and customers rushed to jump the counter for safety. Everyone just took off running from the White Castle and the hotel,” said Ewing, 37. “Employees and customers went downstairs to hide in the break room. We’re here now, 15 of us, with customers. We’re safe but we don’t know what’s happening.”

Kevin Daly, 58, of Long Beach, said he had been playing pai gow at the MGM Grand hotel, down the street from the concert venue, and left to see if he could play a Game of Thrones game near the entry when chaos erupted.

“All these people started running and screaming, and then that stopped for about a minute, and then more people started coming in the other way and ran through where I was,” he said. “There were so many people walking and running and people crying and people saying there’s an active shooter on the street, so I finally asked one of the waitresses what’s going on and she said the shooter is outside of the casino.”

Daly said the entire area was put on lockdown so he went upstairs to his room. “Out the windows, we can see Mandalay Bay, we can see all the police cars and all the lights and there are helicopters all over the place.”

Officials at McCarran International Airport reported that some flights have been diverted in the wake of the shootings. “Expect delays,” the airport said on Twitter.

Parts of I-15 near the Strip were also shut down, and hotel guests across the strip were being ordered to shelter in place. The freeway reopened later, but offramps near the strip remained closed through much of the night. 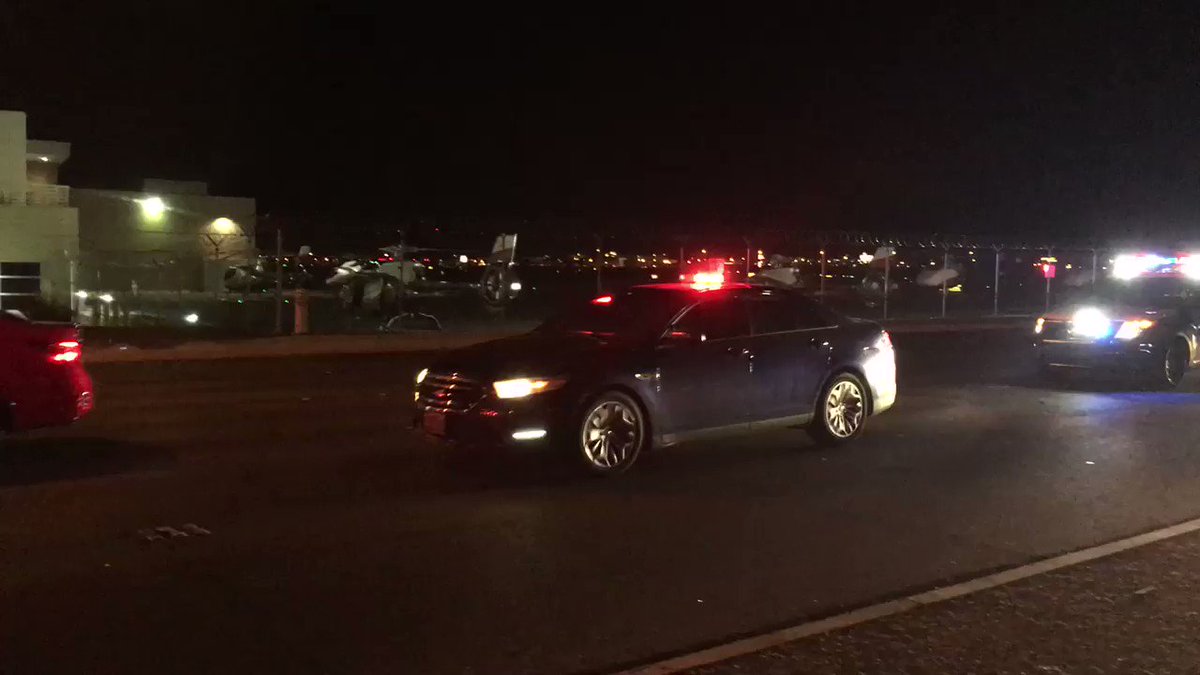 Aldean was the final act of the Route 91 Harvest festival, while dozens of others had played over the course of the weekend, including Eric Church, Sam Hunt and Maren Morris. In numerous tweets, artists communicated with fans and followers, expressing their sorrow and prayers for anyone injured and telling loved ones that they were safe.

Jake Owen, who played the main stage before Aldean, tweeted: "Praying for everyone here in Vegas. I witnessed the most unimaginable event tonight. We are okay. Others aren’t. Please pray."

"Tonight has been beyond horrific,” he wrote. “I still don’t know what to say but wanted to let everyone know that Me and my Crew are safe. My Thoughts and prayers go out to everyone involved tonight. It hurts my heart that this would happen to anyone who was just coming out to enjoy what should have been a fun night. #heartbroken #stopthehate."

Former broadcast journalist Dan Ball, 42, of Palm Desert, had been backstage as a friend of the country duo Big & Rich when they performed, then went to John Rich’s bar “Redneck Riviera” nearby as Aldean took the stage.

“The tour manager came over to us and said shots were fired and people were down. We were locked down in the bar and hunkered down,” Ball said.

When he had been backstage during the performance, he said, he had marveled as he looked at the crowd and thought, “Isn’t it great to look out there? We saw white, black, straight, gay, males, females, everyone out there having a good time. Moments later, these cowards commit a heinous act like this. It’s unbelievable. Unbelievable.”