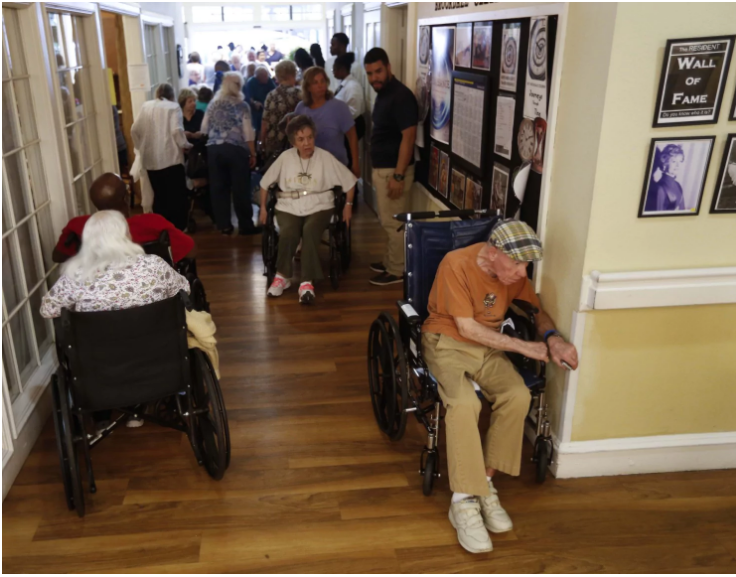 Learning that they needed to evacuate from Hurricane Irma could have been traumatic for the 40 residents with Alzheimer’s disease and dementia, so a nursing home here decided to tell them a comforting tale: The charter buses that arrived to go north were taking them “on vacation.”

On the other side of Florida, there was no sugarcoating the emergency. Televisions at an assisted-living facility north of Fort Lauderdale had for days been tuned to the weather channel when, on Friday morning, the staff lined up all 200 residents outside on the driveway. Nurses strapped color-coded ID-wristbands onto each resident and used white packaging tape to label walkers and wheelchairs.

“I hope they know what they’re doing,” said 93-year-old Mildred Herschenhous, clutching her purse in her lap before two staffers came up and helped her out of her wheelchair and onto a bus. “I’ll be fine, but some of these gals, they’re not as young as me.”

Hurricane Irma had as of Friday afternoon prompted evacuations of more than 150 assisted-living facilities and nursing homes across Florida. By Sunday, experts said, it will probably become the nation’s largest-ever emergency evacuation of licensed facilities for senior care, with 13,000 or more residents relocated to points across Florida and the greater Southeast, from Georgia to Louisiana.

Regardless of the damage Irma brings in coming days, a growing body of academic research shows the stress of hurricane evacuations probably will lead to dozens of deaths among those who have been hastily relocated.

“This is one of those classic cases of damned if you do, damned if you don’t. It’s a very difficult decision: When you evacuate, there is an inherent body count for frail, older adults,” said David Dosa, a geriatrician at Rhode Island Hospital and a professor of medicine at Brown University. “This is going to be a very large storm that adversely affects older people and may affect them more than anyone else.”

Dosa was the lead author of a 2011 study that found that of more than 36,000 nursing home residents exposed to a hurricane since Katrina in 2005, there was a cumulative total of 579 extra deaths and 544 extra hospitalizations within 90 days compared to any similar period during two years preceding the storms. The study found that residents who were evacuated were far more likely than those who sheltered in place to have serious or deadly health conditions develop within 30 days.

Since Hurricane Andrew ravaged the state in 1992, Florida’s population of senior citizens has grown from 2.3 million to 3.6 million, second only to California. And the population is getting older: More than 1.7 million in Florida are at least 75 and half a million are at least 85. More than 600,000 also are disabled, a 30 percent increase since Andrew’s landfall 25 years ago, according to census data.

Dosa and other researchers see an overreliance on evacuation, a trend they say can be traced to Hurricane Katrina, when about 80 nursing home residentsdied in floodwaters. That toll included 35 residents of St. Rita’s Nursing Home near New Orleans, who drowned in wheelchairs and in their beds.

Since then, nursing home and assisted-living facility managers have felt increased pressure to evacuate rather than to shelter in place, according to three studies.

A viral photo of a flooded nursing home last month in Texas, where 20 residents were rescued from waist-deep water during Hurricane Harvey, appears to have heightened the tendency to evacuate ahead of Irma, researchers said.

“The question became, ‘Do you want Anderson Cooper on your doorstep afterward? Or do you want to evacuate so you’re not second-guessed after the storm?’” Dosa said.

Lisa Brown, director of the trauma program at Palo Alto University — and whose 95-year-old father is waiting out the storm in an assisted-living facility near Jacksonville — said the biggest stress from hurricanes seems to come to bear on senior citizens who have cognitive difficulties.

“The waiting, just to get through a storm, I think that’s what’s really stressful, when you can’t understand what’s going on around you,” Brown said. “And then after, if there is damage, waiting to eat, waiting for help, it all changes the routine.”

While moving such a population out of harm’s way is a challenging task, it is something that relatives nationwide have been considering during the past week as Irma has swept toward Florida. Those who could afford it scrambled to buy plane tickets and arrange rides for their senior parents so they would not have to endure the storm.

Howard Spector, 50, was able to get a ticket for his 77-year-old mother in Boynton Beach out of Miami on Thursday. Spector, who owns a convention management company in Loudoun County, Va., sent a car service to pick her up from her villa with her Shih-tzu, Rosie, and arranged for a wheelchair to pick her up at check-in.

Petrified that her flight would be canceled, Spector paid for the car service to wait at the airport until her flight took off, which it did, about four hours late. She landed safely at Baltimore-Washington International Airport around 3 a.m., exhausted but relieved. “I’m a very lucky person,” she said Friday afternoon by phone from Spector’s home in Purcellville, Va.

Spector’s in-laws were not so lucky. They live on the east coast of Florida in Pompano Beach, part of which is under a mandatory evacuation order. By the time they decided to evacuate, all the plane tickets were sold out and the roadways were so jammed that it seemed better to stay put.

Kristen Knapp, spokeswoman for the Florida Health Care Association, which represents most of the state’s 683 licensed nursing homes, said although the number of facilities relocating residents ahead of Irma is large, many are doing so at the behest of local and state emergency officials and from areas under mandatory evacuations because of threats of coastal flooding.

The vast majority of the state’s nursing homes, which house 73,000 people, and assisted-living facilities, which serve another 92,000, are sheltering in place, she said. Staying put, she said, might be a better option when roads are clogged with evacuees.

“Putting them in a bus or van and making them sit on the road for hours is not going to be the best for their health,” Knapp said.

In Naples — on the state’s Gulf Coast and predicted to be in the path of Irma’s eye — the staff of HarborChase of North Collier decided early in the week that it would evacuate the facility’s residents, all of whom have memory-related conditions such as Alzheimer’s and dementia.

“We told them we were going on vacation, so they were all pretty willing to go on the bus with us,” Mitchell said Thursday via cellphone on Interstate 75, in a car trailing the buses.

The shifting forecasts for Irma’s path caused a bit of havoc for elder care organizations seeking to move residents out of the way.

A plan for Brookdale Margate to send more than 200 residents from a home in Fort Lauderdale to a Marriott in Tampa fell apart as the hotel came under an evacuation order. Brookdale, which operates seven facilities in Florida that it was evacuating Friday, instead sent the residents to another assisted-living facility the company operates in Bradenton, south of Tampa. But by late Friday, that was projected to be closer to the eye of the storm than where residents had started out Friday morning, on the state’s east coast.