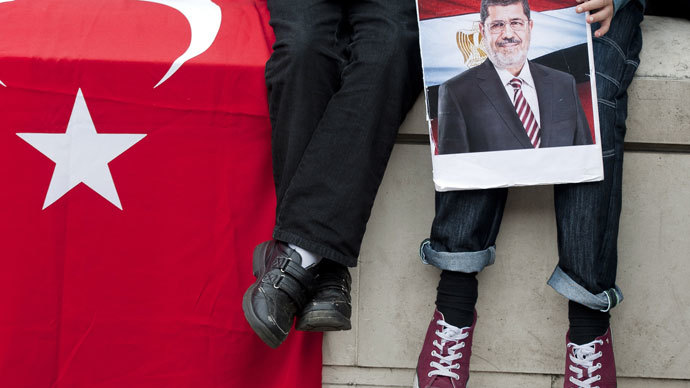 Supporters of the Egyptian Muslim Brotherhood stormed a London university and gate-crashed a lecture. Security intervened to escort a guest speaker to safety away from protesters who chanted slogans against Egypt’s interim military leaders.

Around thirty Muslim Brotherhood activists managed to gain entry into Bloomsbury’s School of Oriental and African Studies (SOAS), which is part of the University of London, on Friday. The mob of demonstrators forced their way into a lecture hall where guest speaker, Mohamed El-Nabawy, was giving a talk, disrupting the lecture and forcing Nabawy from the stage.

The lecture in question dealt with the challenges facing Egypt following the ouster of President Mohammed Morsi and his Muslim Brotherhood party. The protesters took issue with guest speaker, Nabawy, because of his affiliations with the Tamaroud movement that supported the military in its removal of Morsi as president.
The brotherhood members behaved in an aggressive manner and reportedly tried to harass the speaker. They chanted “fall, fall the rule of the military” as Nabawy was escorted from the stage by  security staff.
Following the incident, the university’s Palestine Society who organized the lecture sharply condemned the disruption. They alleged it was orchestrated by “non-members of the SOAS community” and branded it as an attempt to “silence and intimidate our invited speakers and attendees, and to forestall any debate.”

“While we fully respect, and understand, the highly-charged context of any discussion on contemporary Egyptian politics, we believe that the disruptions preempted any possibility of fruitful exchange.”
An Egyptian court banned all Muslim Brotherhood activities in September and ordered the organization’s assets to be confiscated.
"The court bans the activities of the Muslim Brotherhood organization and its non-governmental organization and all the activities that it participates in and any organization derived from it," presiding judge Mohammed Sayed said in September.
Meanwhile, deposed President Mohammed Morsi has been put on trial accused of inciting the murder of protesters outside the presidential palace in December 2012. If Morsi is accused he could potentially face the death penalty.
The court dealing with the case was forced to adjourn on November 4 due to Morsi’s refusal to cooperate with proceedings. The court said the hearing will resume on January 8, 2014, as both the persecution and the defense need more time to examine case details.
The Muslim Brotherhood organization has denounced the trial as a farce aimed at political revenge and maintains Morsi’s legitimacy as president.

Morsi was deposed as president on July 3 by the military and has since been replaced by General Abdul Fattah al-Sisi. The military-backed government has pledged to hold democratic elections, but has not yet set a date for polls.