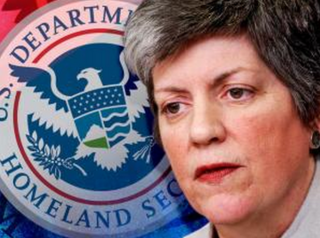 Janet Napolitano, Secretary of the Department of Homeland Security (DHS), is advising internet users to become aware that it is dangerous for Americans to go online. Napolitano stumbled as she explained: “Every individual on the net is vulner – is a potential, uh, opening . . . We just want to make sure that everyone remains safe and free,” she continued. “So that requires everyone to take some responsibility, have good cyber-habits, make sure we use the phrase ‘Stop, think, connect.’”

Napolitano continued: “In my judgment, if we could make it as ordinary as making sure you buckle your seatbelt when you get into a car, there are things you do before you get on the net that would be a significant advance.” She suggests that young children practice “good cyber-hygiene”.

DHS has begun an initiative to purvey propaganda onto American citizens calledStop.Think.Connect. (STC). The STC have teamed with Microsoft to create public service announcements (PSAs) that convince average Americans on how to perceive the inflated threat hackers have on the US government’s cybersecurity.

Some of the founders of the STC initiative are:

In October of last year, DHS began combining resources to create a digital militia that will come to the aid of the US government to protect against cyberthreats. Their focus will be all digital government infrastructures, industry, academia and any cyber “emergencies” that may manifest without warning.

By increasing their cyber workforce by 600%, the DHS is arming themselves with anaylists, IT specialists, and civilians versed in computer language and writing digital code. Thanks to S.2105and Senators Joseph Leiberman, Susan Collins, and Jay Rockefeller, the National Cybersecurity and Communications Integration Center (NCCIC) will imbue DHS with the authority to recruit experts to work for various federal agencies in cybersecurity.

The leaked version of Obama’s cybersecurity executive order is a compromise by the administration offered to those concerned about Big Brother controls invading US citizen’s privacy on the Web. One concession outlined is the sharing of internet traffic information by the US government and private sector corporations involving critical infrastructure and electrical grid. Social media companies would not be held under the same mandate.

The DHS, specifically Secretary Janet Napolitano, will be given the sole power of oversight to reference top-secret intelligence reports only known to her to bases identification of cyberthreats and individual targets.

Napolitano conveyed concern about the possibility of “attacks on our nation’s control systems — the control systems that operate our utilities, our water plants, our pipelines, our financial institutions.”

The National Security Agency (NSA) has begun a comprehensive program to search out our schools into scouting grounds for a team of American grown hacker community. The NSA is focusing on colleges and universities within the US. Four schools have already been singled out as official Centers of Academic Excellence in Cyber Operations.

The NSA wants an elite team of “computer geniuses” that are trained in hacking before they obtain their college degree. The students selected to train under this program will not be privy to the impact their work will have on cyber intelligence, military capabilities and law enforcement’s expansion of spying on Americans.