Janet Napolitano said Friday she will resign as Homeland Security HOMS 0.00%secretary, a departure of a key cabinet member that could complicate immigration politics in Congress.

An Obama administration official said Ms. Napolitano plans to leave her post in early September. Her announcement comes as Congress wrestles with legislation that would overhaul the nation's immigration laws. The Democratic-controlled Senate has passed a bill, and GOP leaders in the House may offer their own immigration measure.

Some Republicans have insisted the government tighten security along the U.S. border before allowing new immigration rules to go into effect. How tighter security would be accomplished—and how it would be measured—are big sticking points in the debate. The department and its agencies are responsible for border security and immigration enforcement.

"When the successor goes through the confirmation process, the immigration issue will be front and center," said Michael Chertoff, Ms. Napolitano's predecessor under George W. Bush's administration. "That person will have to be prepared to speak to some of the challenges involved, particularly in the area of border security."

That confirmation process itself could become a sticking point, as Democrats are on the verge of changing the rules on nominees, a so-called "nuclear option" that could bring all Senate business to a standstill. Under a change being considered by Majority Leader Harry Reid (D., Nev.), Democrats would need just 51 votes to approve executive-branch nominees, rather than the 60 votes effectively required today. Republicans vow retaliation.

"A lot depends on whether Republicans live up to the threats that they're making," said Dan Holler, a spokesman for Heritage Action for America, the lobbying arm for the conservative Heritage Foundation. "If you take them at their word that they're going to shut down the U.S. Senate if Reid goes nuclear, then this will have a huge impact on everything from immigration to homeland security secretary to appropriations."

The successor to Ms. Napolitano, who has been nominated to serve as president of the University of California system, will have to be first approved by the Homeland Security and Governmental Affairs Committee. The panel's chairman, Sen. Tom Carper (D., Del.), and its ranking Republican, Sen. Tom Coburn of Oklahoma, have enjoyed a solid relationship, aides said, and a Carper aide said she doubts that Republicans on the panel would seek to delay the nominee, even if the Senate rules are changed for the confirmation of executive-branch nominees.

The Department of Homeland Security was created after the Sept. 11, 2001, terror attacks, and Mr. Chertoff said she performed well in guiding the department into its second decade—and that her successor will have to heighten cybersecurity coordination between the government and private companies.

Administration officials offered no details about who might succeed Ms. Napolitano, a 55-year-old former federal prosecutor and ex-governor of Arizona. Possible candidates within the department, according to observers, include Craig Fugate, the head of the Federal Emergency Management Agency, and John Pistole, head of the Transportation Safety Administration.

Ms. Napolitano in a statement said the agency during her time at the helm had made travel safer, bolstered border security, helped states better respond to disasters and worked with companies to fight cyber attacks.

The president in a statement said she had "worked around the clock" on various disasters, including the 2011 Joplin, Mo., tornado and last year's Hurricane Sandy. On immigration policy, he said: "Since day one, Janet has led my administration's effort to secure our borders…while also taking steps to make our immigration system fairer and more consistent with our values."

Ms. Napolitano has faced criticism from both sides of the political spectrum. Conservatives have questioned her approach to border security, while advocates for an immigration overhaul have faulted her department for deporting illegal immigrants.

Rep. Michael McCaul (R., Texas) chairman of the House Homeland Security Committee, said "the border is not secure, and the threat of terrorism is not diminishing," in a response to Ms. Napolitano's resignation.

Ali Noorani, executive director of the National Immigration Forum, an advocacy group that favors an immigration overhaul, said Ms. Napolitano "was in a tough position where she had to enforce even what she recognized was a bad set of laws." 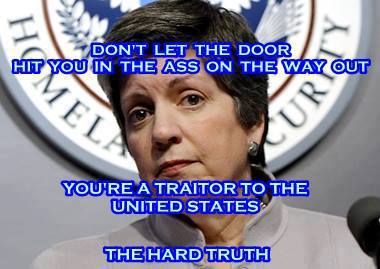