Hemp is a bast fiber plant similar to flax, kenaf, jute and ramie. Long slender primary fibers on the outer portion of the stalk characterize bast fiber plants. An annual plant that grows from seed, hemp can be grown on a range of soils, but tends to grow best on land that produces high yields of corn. The soil must be well drained, rich in nitrogen, and non-acidic. Hemp requires limited pesticides because is grows so quickly and attracts few pests. In northern latitudes, hemp is usually planted between early March and late May. Hemp averages between 2-4 meters in height in about four months of growth. Hemp crops are harvested at different times for different hemp products.

The hemp plant is harvested for its fibers, seed, seed meal and seed oil. The valued primary fibers are contained around the hollow, woody core of the hemp stalk. These long, strong fibers that grow the length of the hemp stalk are considered bast fibers. Hemp fiber possesses properties similar to other bast fibers (flax, kenaf, jute and ramie) and excels in fiber length, strength, durability, absorbency, antimildew and antimicrobial properties.

Once a hemp crop has matured and been harvested, hemp primary fibers are separated from the hemp stalk through the "retting" process. For "dew retting", the cut stalks are left in the field for several weeks to allow natural humidity and bacteria to decompose the fiber-binding pectins. Other ways to separate the fiber from the core are: water retting, warm water retting and chemical retting. When the retting process is complete, the fibers are readily separated from the core, and processed for specific products. This is a female plant below. 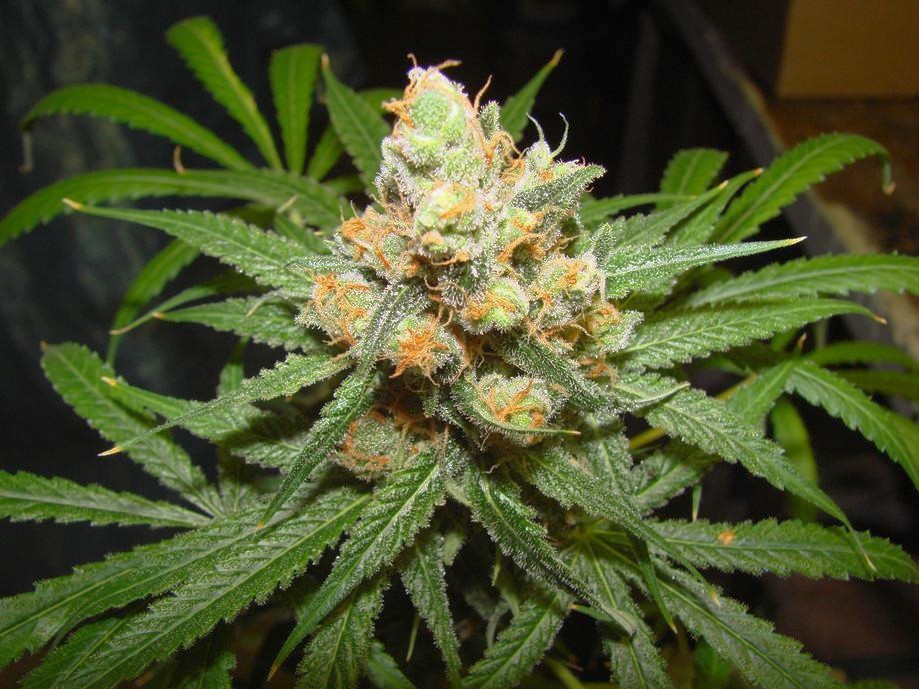 Some of hemp's many uses:

Primary fibers are long-staple length fibers, averaging 8-inch (20 cm) in length. These hemp fibers can be spun and woven to a fine, crisp, linen-like fabric and used for apparel textiles, home furnishing textiles and carpeting. Antimildew and antimicrobial properties make them very suitable for sails, tarps, awnings, and floor coverings. Primary fibers can be cut to shorter staple lengths to accommodate a variety of spinning systems. Hemp fiber blended with wool, cotton, linen or other fibers, adds strength, durability, absorbency and breathability, making hemp-blended fabrics cool and comfortable to wear and touch.

Core fiber is derived from the sturdy, wood-like hollow stalk of the hemp plant. Sometimes referred to as "hurds", it is up to twice as absorbent as wood shavings, making it an excellent animal bedding and garden mulch. It can be easily blended with lime to create a strong yet lightweight concrete or plaster. Its high cellulose content means it can be applied to the manufacturing of plastics. Like primary fiber, it is biodegradable and possesses antimildew and antimicrobial properties.

Hemp has been grown for at least the last 12,000 years for fiber (textiles and paper) and food—it has been effectively prohibited in the United States since the 1950s. Because of its importance for sails (the word "canvas" is rooted in the word "cannabis") and rope for ships, hemp was a required crop in the American colonies. In fact, both George Washington and Thomas Jefferson grew hemp, Ben Franklin owned a mill that made hemp paper, and Jefferson drafted the Declaration of Independence on hemp paper. When US sources of "Manila hemp" (not true hemp) were cut off by the Japanese during WWII, the US Army and US Department of Agriculture promoted the "Hemp for Victory" campaign to again grow hemp in the US.

Henry Ford wanted to build and fuel automobiles from farm products and he experimented with hemp to build car bodies. BMW has experimented with hemp materials in automobiles as part of an effort to make cars more recyclable. Rudolph Diesel designed his engine to run on hemp oil. Hemp oil once greased machines. Most paints, resins, shellacs, and varnishes used to be made out of linseed (from flax) and hemp oils. Much of the bird seed sold in the US has hemp seed (sterilized before importation), the hulls of which contain about 25% protein. Kimberly Clark (on the Fortune 500) has a mill in France which produces hemp paper preferred for bibles because it lasts a very long time and doesn't yellow. Construction products such as medium density fiber board, oriented strand board, and even beams, studs and posts could be made out of hemp. Because of hemp's long fibers, the products will be stronger and/or lighter than those made from wood.

Hemp was grown commercially (with increasing governmental interference) in the United States until the 1950s. It was doomed by the Marijuana Tax Act of 1937, which placed an extremely high tax on marijuana and made it effectively impossible to grow industrial hemp. While Congress expressly expected the continued production of industrial hemp, the Federal Bureau of Narcotics lumped industrial hemp with marijuana, as it's successor the US Drug Enforcement Administration, does to this day.

The products that can be made from hemp number over 25,000. Over 30 industrialized democracies do distinguish hemp from marijuana. International treaties regarding marijuana make an exception for industrial hemp. Recently, Canada allowed the legal growing of hemp for industrial purposes.