North Dakota pipeline leak may amount to 100 barrels of oil 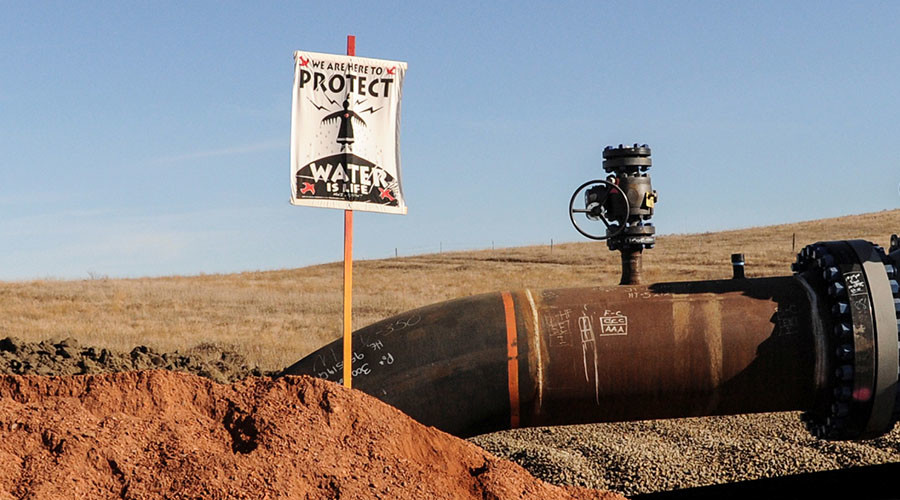 Some 100 barrels of oil and water may have spilled into the Ash Coulee Creek from a pipeline in North Dakota, according to the state health department. Inspection and containment have been hampered by blizzard conditions, and the water is starting to freeze.

“We are beginning skimming operations,” Bill Suess, a spill investigator for the North Dakota Department of Health, told RT. “No volumes yet, but vague reports of [a leak] of 100 barrels of oil, possibly water and oil, but can’t confirm yet.”

Suess said the investigations had been hampered by a blizzard in the area and that the water is starting to freeze, noting that final results will be reported when the probe is finished.

He did say that there had been “construction in the area where the pipeline was hit.”

“There are containment booms up and the vast majority of the spill is contained,” said Suess.

The six-inch Belle Fourche pipeline, which runs above ground, leaked into an unnamed tributary of the Ash Coulee Creek – a creek that flows year round and feeds into the Little Missouri River.

The creek is 16 miles northwest of Belfield in Billings County, North Dakota and 200 miles west of the Dakota Access Pipeline protests.

The leak was first reported on Monday and the pipeline was shut down.

“I know this [current leak] is getting a lot of attention because of the Dakota Access Pipeline, but this is different. That pipeline [DAP] would be 90 feet below the river bed,” said Suess.

Dakota and eastern Montana, according to the company website.

It is not the first time the Belle Fourche Pipeline has had a spill.

According to records from US Department of Transportation, the company has had 10 reported spills over the past five years, accounting for a loss of nearly 5,000 barrels of oil, causing $2.26 million in property damage.

This leak occurred as Native Americans, climate activists, and others are protesting at the site of the Dakota Access pipeline project over concerns that a leak there could contaminate the water supply.

Over the weekend, they were rewarded with the news that, in response to a lawsuit filed by the Standing Rock Sioux Tribe, the Army Corps of Engineers has denied Energy Transfer Partners a permit to build the pipeline under the Missouri River at the current site, pending an environmental review that could take anywhere from six months to a year.