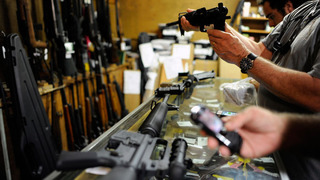 The National Rifle Association claims it has obtained a Justice Department memo that notes President Obama’s gun control initiatives would be ineffective without seizing citizens' assault rifles and requiring a federal gun registration.

It's not clear how the NRA obtained a memo under the name of one of the Justice Department's leading crime researchers, but its authenticity has not neither been challenged by the White House nor Justice Department.

The NRA is using the memo in advertisements, zeroing in on the statement claiming that the success of universal background checks would depend on “requiring gun registration” and that gun buybacks would not work “unless massive and coupled with a ban.”

The memo also says that requiring background checks for gun purchases would not be enough to address gun violence and that it could lead to more unlawful weapons sales among those not able to pass or not willing to subject themselves to a background check.

Obama has publicly assured gun owners that they would be able to keep their existing assault-style weapons and high capacity ammunition under tighter gun control legislation. However the memo, which was kept private until the NRA got hold of the document, states that exempting already possessed assault weapons wouldn't have much impact on gun violence, since so many rifles of this type are already in the hands of Americans.

In televised advertisements across 15 states, the NRA is now citing the nine-page memo as ‘proof’ that the administration “believes that a gun ban will not work without mandatory gun confiscation.”The advertisements have caused heated discussion about the extent that the government wants to take gun control legislation.

But a Justice Department official told the Associated Press that the memo does not represent administration policy and that it was simply just an unfinished review of gun violence research. Publicly, Justice Department and White House officials have so far refused to answer any questions about the document.

It remains unclear if the memo represents the administration’s standpoint or future plans. But in January, White House spokesman Jay Carney promised that Obama’s gun control proposals would not take away any weapons from law-abiding Americans or require a national gun registry.

The NRA’s publication of the memo puts the Justice Department in conflict with the Obama administration’s public statements on gun control, further adding to the already-heated debate on how to address gun violence in the aftermath of the massacre in Newtown, Conn.

While the NRA has used the memo as a warning of the administration’s plans, Joshua Horwitz, executive director of the Coalition to Stop Gun Violence, said the memo is an analysis about gun violence that doesn’t seem to indicate any sort of legislative plans by the government. The memo includes data on the frequency of mass shootings, gun violence, and the effectiveness of current legislation.