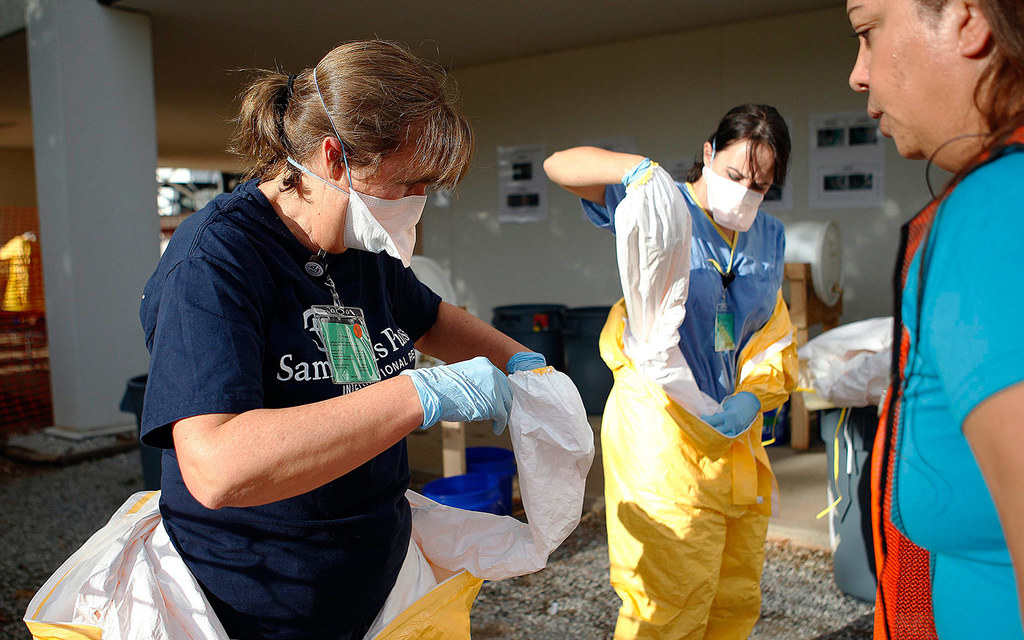 An Ebola patient was left in an open area of a Dallas emergency room for hours, and the nurses treating him worked for days without proper protective gear and faced constantly changing protocols, according to a statement released late Tuesday by National Nurses United (NNU), the largest U.S. nurses’ union.

Nurses were forced to use medical tape to secure openings in their flimsy garments, worried that their necks and heads were exposed as they cared for a patient with diarrhea and projectile vomiting, said Deborah Burger of the NNU.

Even today, Burger said, some staffers at the Dallas hospital do not have proper equipment to handle patients with the disease.

“Hospital managers have assured nurses that proper equipment has been ordered, but it has not arrived yet,” she said.

Burger convened a conference call with reporters to relay what she said were concerns of nurses at Texas Health Presbyterian Hospital, where Thomas Eric Duncan, the first person to be diagnosed with Ebola in the U.S., died last week.

He died Oct. 8, and the hospital said Sunday that one of his nurses has tested positive for Ebola. She is hospitalized and was listed Tuesday in good condition. On Wednesday, Texas health officials announced that a preliminary test indicated a second, unidentified health care worker at the hospital had also been infected.

Dr. Daniel Varga, chief clinical officer of Texas Health Resources, which owns the hospital, denied the nurses’ allegations on Wednesday and said that the hospital’s quick isolation of the second health care worker proved its response to the disease is working.

“A lot is being said about what may or may not have happened to expose our colleagues to this disease,” but there is no “systemic” problem that led to the workers’ infections, Varga said.

“No one wants to get this right more than our hospital,” he added, saying that he would not comment on the allegations the union made but that health care workers do have access to proper protective gear.

RoseAnn DeMoro, executive director of the NNU, said the statement came from “several” and “a few” nurses, but she refused to answer repeated inquiries about the specific number. She said the organization had vetted the claims and that the nurses cited were in a position to know what occurred at the hospital.

Among the nurses’ allegations was that Duncan’s lab samples were allowed to travel through the hospital’s pneumatic tubes, opening the possibility of contaminating the specimen delivery system. The nurses also alleged that hazardous waste was allowed to pile up to the ceiling.

Wendell Watson, a hospital spokesman, did not respond to specific claims by the nurses but said the hospital has not received similar complaints.

“Patient and employee safety is our greatest priority, and we take compliance very seriously,” he said in a statement. He said the hospital would “review and respond to any concerns raised by our nurses and all employees.”

The nurses alleged that:

The nurses’ statement said they had to “interact with Mr. Duncan with whatever protective equipment was available,” even as he produced “a lot of contagious fluids.” Duncan’s medical records, which his family shared with The Associated Press, underscore some of those concerns.

When Ebola was suspected but unconfirmed, a doctor wrote “using the disposable shoe covers should also be considered.” At that point, by all protocols, shoe covers should have been mandatory to prevent anyone from tracking contagious bodily fluids around the hospital.

The Texas Health Presbyterian nurses are not represented by the NNU or any other union. DeMoro and Burger said the nurses claimed they had been warned by the hospital not to speak to the media or they would be fired. They did not specify whether the nurses making the claims were among Duncan’s caregivers.

David R. Wright, deputy regional administrator for the U.S. Centers for Medicare and Medicaid Services, which monitors patient safety and has the authority to withhold federal funding, said his agency is going to want to get all the information the nurses provided.

“We can’t talk about whether we’re going to investigate or not, but we’d be interested in hearing that information,” he said.

CDC officials did not immediately respond to requests for comment.

The CDC said Tuesday that 76 people at the hospital could have been exposed to Duncan after his second ER visit. Another 48 people are being monitored for possible exposure before he was hospitalized.