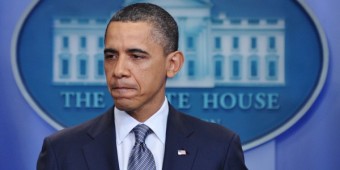 Let the president be duly warned. Rep. Walter B. Jones Jr., R-N.C., has introduced a resolution declaring that should the president use offensive military force without authorization of an act of Congress, “it is the sense of Congress” that such an act would be “an impeachable high crime and misdemeanor.”

Specifically, Article I, Section 8, of the Constitution reserves for Congress alone the power to declare war, a restriction that has been sorely tested in recent years, including Obama’s authorization of military force in Libya.

“This week it was Secretary of Defense Panetta’s declaration before the Senate Armed Services Committee that he and President Obama look not to the Congress for authorization to bomb Syria but to NATO and the United Nations,” Tancredo writes. “This led to Rep. Walter Jones, R-N.C., introducing an official resolution calling for impeachment should Obama take offensive action based on Panetta’s policy statement, because it would violate the Constitution.”

Get the bumper sticker that tells everyone to Impeach Obama!

In response to questions from Sen. Jeff Sessions, R-Ala., over who determines the proper and legal use of the U.S. military, Panetta said, “Our goal would be to seek international permission and we would … come to the Congress and inform you and determine how best to approach this, whether or not we would want to get permission from the Congress – I think those are issues we would have to discuss as we decide what to do here.”

“Well, I’m almost breathless about that,” Sessions responded, “because what I heard you say is, ‘We’re going to seek international approval, and then we’ll come and tell the Congress what we might do, and we might seek congressional approval.’ And I just want to say to you that’s a big [deal].”

Asked again what was the legal basis for U.S. military force, Panetta suggested a NATO coalition or U.N. resolution.

Sessions was dumbfounded by the answer.

“Well, I’m all for having international support, but I’m really baffled by the idea that somehow an international assembly provides a legal basis for the United States military to be deployed in combat,” Sessions said. “They can provide no legal authority. The only legal authority that’s required to deploy the United States military is of the Congress and the president and the law and the Constitution.”

The exchange itself can be seen below:

The full wording of H. Con. Res. 107, which is currently referred to the House Committee on the Judiciary, is as follows:

Expressing the sense of Congress that the use of offensive military force by a president without prior and clear authorization of an act of Congress constitutes an impeachable high crime and misdemeanor under Article II, Section 4 of the Constitution.

Whereas the cornerstone of the Republic is honoring Congress’s exclusive power to declare war under article I, section 8, clause 11 of the Constitution: Now, therefore, be it

Resolved by the House of Representatives (the Senate concurring), That it is the sense of Congress that, except in response to an actual or imminent attack against the territory of the United States, the use of offensive military force by a president without prior and clear authorization of an act of Congress violates Congress’s exclusive power to declare war under Article I, Section 8, clause 11 of the Constitution and therefore constitutes an impeachable high crime and misdemeanor under Article II, Section 4 of the Constitution.