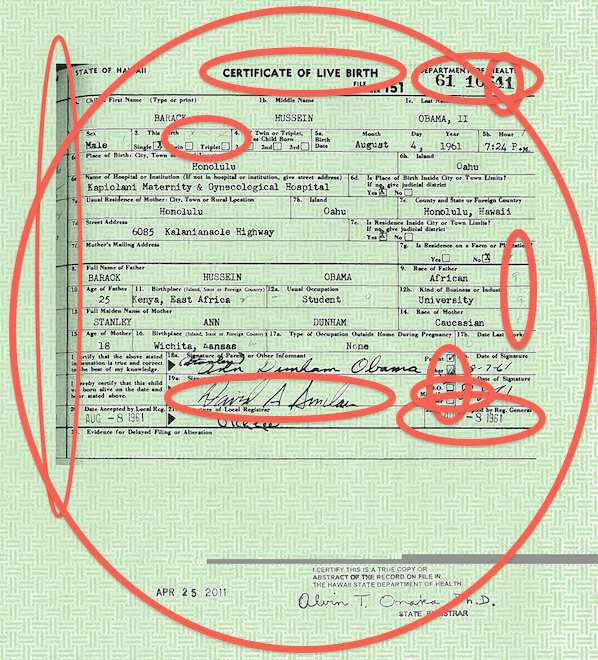 There are so many things wrong with the alleged "long form" of Barak Obama's birth certificate, that Alex Jones has temporarily concluded that this whole "birther" thing has all been contrived to serve as a distraction or side show from real issues. "They couldn't possibly think we're this stupid."

My response to Alex Jones is, "9/11 is also blatantly obviously an inside job to anyone who looks honestly." The evidence is to clear that those buildings came down with the help of pre-placed demolition charges.

Americans, to their downfall, have been trained to accept what their government and media tells them to be true is really true. They have a very short attention span and don't think for themselves or pay attention to important details, but just go along with the mainstream and quickly shut up when made fun of.

Alex has been a bull-dog on 9/11; and he needs to be the bull-dog on the fact that 1) President Barak Obama was not born in the United States, and 2) both his parents were not citizens of the United States thus disqualifying him as a Constitutionally-mandated candidate for that office because he is not a "natural-born citizen", which means that both parents are U.S. citizens at the time of his/her birth. He is a Constitutional bastard and should be thrown out of office as illegitimate and a traitor to the Constitution that he swore to uphold. His very act of running showed flagrant disregard to the Constitution. Indeed, even a cursory glance at the alleged "long form" by even an untrained eye shows a tell-tale sign that it is contrived, not genuine.

Look at the upper left hand corner and down the left side. It is obvious to see that one document has been cropped and overlaid on top of a matching background. At least that much has been doctored -- blatantly.

Second, as many have pointed out, when the pdf file from the Whitehouse website is pulled into Adobe Illustrator, it doesn't pull up as one item, which would be the case if it was truly just scanned in from an original as claimed; but several editing "layers" show up, superimposed on top of each other, including doctored numbers, names, signature, etc.

Thousands of websites have noticed that and are talking about this "sophomoric" level of fraud. With all their spook tricks up their sleeves, you would think they could have done a more convincing job on such an important announcement as this one, which would be so carefully scrutinized.

Here's a video of Alex Jones pointing these out, along with Rob Dew:

The question Alex Jones asks is "why so blatant?" I think his answer is wrong. He says it must be meant to be a distraction to get people hyperventilating about this -- as a decoy from darker issues they should be paying attention to; and that the whole "birther" thing was designed as a decoy all along and actually has no substance.

I don't think so. Yes, there are plenty of other dark issues that we need to pay attention to; but this is one of them, not just a decoy. I think it is a case of extreme slop by a power structure that is so arrogant in how much lying they've been able to get away with, and how easy it is for the American People to buy into their lies.

One of the tell-tale signs that this is intended as a deception is that the usual administration lapdogs, the mainstream media, are not covering this certificate fraud issue. They're not touching it, despite how obvious it is.

The fact remains that Barak Obama is not a Constitutionally-allowed president and he should be removed. He should have never been elected. The fact that he's been able to get away with it for this long, is as much a travesty as the fact that the conspirators have been able to get away with 9/11, blaming it on al Qaeda, while their purpose was to give reason to go to war, take away our liberties, and wage war on our civil liberties, all in the name of the "war on terror;" when they are in fact the biggest terrorists.

This level of slop should give us hope that they are near the end of their game; and should give us all the more evidence and reason to get rid of the conspirators who have been destroying the economy, suppressing free energy, waging war on civil liberties, and otherwise destroying the planet, all while claiming to be environmentalists.

Ron Paul is another one who needs to come up to speed on this one. He was caught like a deer in the headlights on this issue recently when asked about it, and the host concluded, "so, you're not a birther." (Link) Come on Ron Paul, surely your staff is more astute than that. They should bring you up to speed on the myriad of facts behind this.

Briefly, here are some of the main evidences that this is a forgery: 1.No official seal.
2.No footprint.
3.There was no "Kenya" in 1961. Kenya was founded in December, 1963. (Link) Prior to that, it was called Kenya African National Union (KANU).
4.According to the hospital's website, in 1961 that hospital was named Kauaikeolani Children's Hospital. It did not change its name to the Kapiolani Maternity Hospital until it merged with the Kapiolani hospital system in 1978.
5.Dr. Sinclair was working at the Kauaikeolani Children's hospital in 1961.
6.Instead of "African" under father's race, "Colored" or "Negro" would have been used in 1961.
7.Birth certificate of someone born at the same hospital a day later has a lower number.
8.The "Date Accepted" is four days later than "Date of Birth."
9.No birth weight.
10.Address for Obama's childhood home is the middle of a highway.
11.Hawaii's Governor until recently claimed there was no birth certificate.
12.His birth name was Barry Saetoro (held through college, e.g. Occidental transcript), and he changed his name to Barack Obama after visiting Pakistan. (Some say he started with the name Barak Obama, then changed to Barry Soetoro, then back to Barak Obama)
Typesetting Problems
1.The content portion is obviously cropped and laid on top of a new background.
2.Obviously Photoshopped, with layers revealed when the Whitehouse pdf is opened in Adobe Illustrator.
3.There is no "chromatic aberration" around the letters and numbers, which normally shows up in enlarged viewing of color scans. (Link)
4."41" at to right of document looks suspicious, as the 1 is a different pixilation and doesn't appear to be as "aged" as the digits preceding it.

5.The type for "Caucasian" is too perfect, not possible for a typewriter from 1961.
6.Under hour of birth, the "M." in "P.M." is a different font.
7.The patterned background is too seamless for a document kept in a bound volume.
8.Two mysterious Xs above "twin" and "triplet."
9.Unexplained "8991" on document's right side.
10.Still says "Certificate of Live Birth."
11.Signature of mother and attendant are too similar.
All this being said, I tend to agree with Tony Cartalucci in his article, Obama's Birth Certificate: Not the Issue. He points out that the powers that be, behind the scenes, are really the ones running the show, and they control whoever is in office (at least those who have been in office for the past many decades). It's that corruption that needs to be cleaned up most of all. If Ron Paul were elected, they wouldn't be able to control him.

Links
www.whitehouse.gov/blog/2011/04/27/president-obamas-long-form-birth...
en.wikipedia.org/wiki/Natural_Born_Citizen_Clause
www.buzzfeed.com/gavon/top-20-conspiracy-theories-that-have-already...
youtu.be/2eOfYwYyS_c - The "copy" the White House released is not a copy. It is manufactured. This video goes through the proof, and it's much more than the Illustrator "breadcrumbs" that others have found and talked about.

youtu.be/3g30VCl_cgk - Alex Jones and Rob Dew point out the numerous layers that show up in Adobe Illustrator. Some of the numerical characters look as if they were added after the fact by a printer rather than a typewriter.