Obama has been lusting after your private retirement and pension funds for years. Now it’s being reported the federal government is accelerating its plans to grab your monies and tarnish your Golden Years.

Several years ago a radical professor met with some key members of Congress to tout her plan to have the federal government raid private pension plans, including all IRAs and 401(k)s, and fold them into the Social Security Trust Fund, or a new superfund comprised of Government Retirement Accounts (GRAs). The story, although covered, was under-reported by the mainstream media. 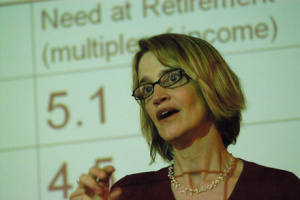 Professor Teresa Ghilarducci, professor of economic policy analysis at the New School for Social Research in New York, met with select Congressmen to advocate the confiscation of private retirement funds: 401(k)s, IRAs and company pension plans. She argued her plan met the needs of “economic justice.”

During her jaw-dropping testimony before the House Committee on Education and Labor, she pressed for the adoption of a multistage plan:

First, eliminate every tax break for 401(k) and other private retirement accounts.

Second, confiscate by Congressional edict every American’s retirement program. Toss all the money into the bottomless pit of the corrupt government and call the stolen cash “Guaranteed Retirement Accounts” (GRAs) to make it sound nice and official.

If anyone has the temerity to resist the government theft of their retirement nestegg, she had a solution for that too: fine or jail them. At the time, James Pethokoukis reported in US News & World Reports, “In place of 401(k) plans, she would have workers transfer their dough into government-created ‘guaranteed retirement accounts’ for every worker. The government would deposit $600 (inflation indexed) every year into the GRAs. Each worker would also have to save 5 percent of pay into the accounts, to which the government would pay a measly 3 percent return. Rep. Jim McDermott, a Democrat from Washington and chairman of the House Ways and Means Committee’s Subcommittee on Income Security and Family Support, said that since ‘the savings rate isn’t going up for the investment of $80 billion [in 401(k) tax breaks], we have to start to think about whether or not we want to continue to invest that $80 billion for a policy that’s not generating what we now say it should.’”

That foray into the murky swamp advocating the outright hijacking of the previously sacrosanct private pension markets was followed by a flurry of reports in 2010 and 2011, among them Bloomberg’s Business Week revealing the Obama administration sought ways to convert all 401(k) savings and Individual Retirement Accounts (IRAs) into (government) annuities or other comparable financial structures. NewsMax reports the current drive to replace private pensions and retirement plans with federally managed GRAs has not only picked up speed, but has widened its scope. Newsmax cites the administration’s 256-page Fiscal Year 2013 Budget Proposal touting the reintroduction of the 2008 “Automatic IRA” that Newsmax points out has “evolved” into two basic schemes:

1. Secure Choice Pension and Government Retirement Accounts (GRA’s), both of which automatically mandate 5 percent to 6 percent contributions into a basket of federal GRAs. Like Social Security, if the particiapnt dies the government keeps everything and nothing passes on to the decedent’s estate.

2. A significant change in the current tax law. The current deduction will be replaced with a credit, redeemable only after retirement. That weights it in the government’s favor. Worse, eligibility for the credit will be reached after choosing an option to move the entirety of the retirement balance into the annuity portion of the GRA. That investment sector is funded strictly with long term U.S Treasury Bonds with an estimated future accumulation of 3 percent a year.

For more information focusing on the plan Obama has to grab your pension and retirement monies for the dead broke Uncle Sam, read Dr. Eowyn’s assessment here…and also learn all about thestates that are following the federal government’s lead and laying the foundation for legal theft of your retirement assets.