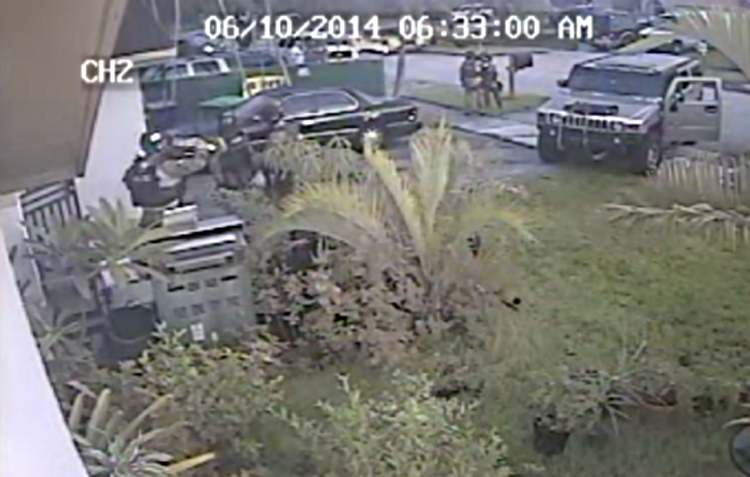 In America, we have certain rights. Central to our civil liberties is a presumption of innocence until having been found guilty in a court of law and the right of citizens to be secure from unreasonable sea
One Florida couple found out the hard way that though these rights exist in theory, the modern federal government feels free to play fast-and-loose with these concepts.
At approximately 6:16 am on June 10th, 2014, Kari Edwards and her live-in boyfriend were seized upon by a SWAT team who smashed in the door and using flashbangs and armed to the teeth, swarmed upon the couple and even stripped Ms. Edwards naked in the process.
The couple says that the group entailed personnel from DHS, for whom Edwards once worked. After smashing in the door, the tactical team threw in flashbang grenades, traumatizing their cat and swarmed upon Edwards’s boyfriend and Edwards who had just gotten out of the shower.
“They busted in like I was a terrorist or something,” Edwards said.
“[An officer] demanded that I drop the towel I was covering my naked body with before snatching it off me physically and throwing me to the ground.”
“While I lay naked, I was cuffed so tightly I could not feel my hands. For no reason, at gunpoint,” Edwards said. “[Agents] refused to cover me, no matter how many times I asked.”
“I have never been in any trouble before,” Edwards later stated. “Haven’t even had a traffic ticket in over ten years.”
The couple claim to have seen several different agency uniforms and Edwards repeatedly asked who they were and why they were there. Edwards claimed that they would only identify as “police” and refused to identify why they were there.
The couple has surveillance cameras which caught much of the action. When they were discovered, agents turned the cameras toward the wall.
After two hours and after the agents had thoroughly trashed the house, Edwards was given a warrant signed by Jonathan Goodman, a federal magistrate judge for the U.S. District Court for the Southern District of Florida that authorized the agents to search for computers and electronics.
Edwards’ boyfriend fixes up old computers but she claimed that the police barely looked at any electronics and did not seize any of the electronics in the house.
Like so many recent instances regarding federal militancy, the root cause of the police action can be justifiable while the manner in which police are investigating alleged illegalities is wholly inappropriate. If the police had a warrant to search for electronics, it’s possible to have executed that warrant without the firepower once reserved for Army Rangers going door-to-door in Fallujah.