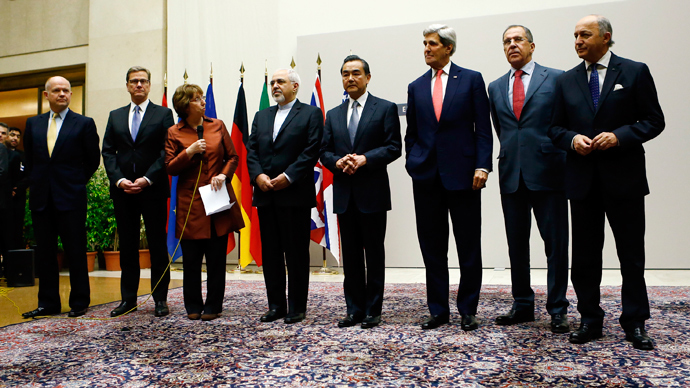 The P5+1 world powers and Iran have struck a historic deal on Tehran’s nuclear program at talks in Geneva. Ministers overcame the last remaining hurdles to reach an interim agreement, despite strong pressure from Israel and lobby groups.

“This deal means that we agree with the need to recognize Iran's right for peaceful nuclear energy, including the right for enrichment, with an understanding that those questions about the [Iranian nuclear program] that still remain, and the program itself, will be placed under a strictest IAEA control,”Russian Foreign Minister Sergey Lavrov told journalists.

Under the agreement, Iran will freeze its nuclear program for six months. It will not build new centrifuges or in some other way expand its nuclear facilities. The nation has also agreed to halt construction of a reactor in Arak for the next six months.

Moscow is convinced that the international community and Iran will benefit from the agreement reached in Geneva.

“The totality of factors in general is a plus. Nobody lost. All turned out to be winners. Hopefully, this agreement will be beneficial for the efforts to resolve the Syrian problem in engaging Iran in constructive work to hold the Geneva 2 conference,” Lavrov said.

The IAEA's ability to monitor Iran's nuclear program has significantly expanded, Lavrov said adding that he has full confidence that Iran will cooperate in good faith with the IAEA.

“IAEA significantly expanded the opportunities to monitor Iran's nuclear program. Iran agreed on a number of additional measures beyond those which the agency applies at the moment,” Russian FM said.

Lavrov also expressed hope that the step taken by the P5+1 group and Iran to create the prerequisites for the convening a Middle East free of weapons of mass destruction conference.

The interim deal will provide the time and space to try to reach a “comprehensive solution” to the nuclear standoff between Tehran and the West, EU foreign policy chief Catherine Ashton said.

US President Barack Obama said that temporary nuclear deal is an important first step toward a comprehensive solution to Iran’s nuclear program.

Under the deal Iran has agreed to halt enriching uranium up to 20 percent for six months, while enrichment under 5 percent will be continued.

Under the agreement Iran will get access to $4.2 billion in exchange for halting its nuclear program, a Western diplomat told Reuters.

US President Obama is expected to deliver a speech on the historic resolution within the next hour.

The P5+1 and Iran arrived at the historic deal over Iran’s nuclear program at approximately 3:00 AM local time in Geneva.

Before the assembly, the foreign ministers reportedly spent some time consulting with their capitals, a diplomatic source in the Russian delegation told Ria.

Russian Foreign Minister Sergey Lavrov stressed on Saturday that “for the first time in many years the six world powers and Iran have a real opportunity to reach agreement.”

The tough discussions of the remaining sticking point of nuclear enrichment has stretched into the night, as the world powers were adamant to strike a deal.

According to Iranian Deputy Foreign Minister Abbas Araghchi, shortly before midnight, the talks were in “their 11th hour.” He said that “98 percent of the draft” had already been agreed and the sides were discussing the remaining 2 percent, which was “very important” to the Iranian side.

During the day Iran once again reiterated it would not accept a deal which did not recognize in one way or another Iran’s right to enrich uranium.

“Any agreement without recognizing Iran's right to enrich, practically and verbally, will be unacceptable for Tehran,” Araghchi told journalists.