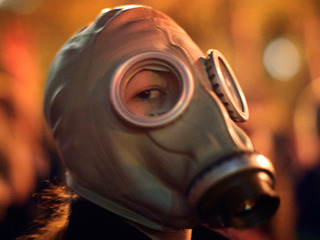 The phrase ‘chemical weapons’ has sparked fear in the US for years, so the Pentagon recently dished out $2.7 million for research on using a plant closely related to tobacco to protect soldiers from chemical warfare.

It’s a somewhat ironic decision by a country that vowed to spend $54 million on anti-tobacco advertising campaigns this year.

Washington hopes the research will yield pre-treatments containing the protein that can be given to troops pre-deployment, in case they face a chemical weapon attack.

The rBuChE protein is also found within the human liver, where it is thought to be a ‘bioscavenger’ that waits in the bloodstream to attack harmful agents.

According to the grant proposal, the aim of the project is to produce enough rBuChe to create “a drug that can protect the war fighter from chemical threat agent exposures.”

When a nerve agent enters the body, it stops certain enzymes from working, including the ones that break down the nerve-signaling molecule acetylcholine. When acetylcholine levels get too high, the entire nervous system shuts down.

The symptoms are ugly and painful – ranging from diarrhea, nausea, irregular heart rates, convulsions and even death. At present, there is no way to prevent these symptoms; medical professionals can only treat the damage after the fact.

But if scientists’ hypotheses are correct, the rBuChe protein will attack nerve gas and other nerve agents when they’re enter the body. Once the protein detects a harmful substance, it binds to it and breaks it down into sub-particles before it can attack the nervous system.

If the research is successful, the pre-treatment will be made available to soldiers through a vaccine or intravenously.

Currently, the US depends on detection devices and breathing apparatus to protect against chemical attacks. Vaccines are available for some types of attacks, including anthrax, but there are no treatments for many others.

Defense officials have developed a long-range biowarfare detector – a laser-scanning instrument mounted on a Blackhawk helicopter. The device has a range of around 50 kilometers.

“If we can see it 50 kilometers off, that gives us a tremendous amount of time either to prepare for it coming our way, or to go out and sample that cloud,” Wade said. Defense researchers are also developing smaller, lighter and simpler biowarfare detectors. “We have a number of systems that can now be deployed on the battlefield,” he said.

The US military’s ‘Portal Shield’ can detect eight different types of nerve agents, and deploy as many as 18 sensors around a port or airfield. The sensors then exchange data to detect chemical agents.

Most countries around the world have signed on to the Chemical Weapons Convention (CWC), which bans the production, stockpiling and use of chemical weapons. However, six nations have refused to join the convention: Angola, North Korea, Egypt, Somalia, South Sudan and Syria.

Burma and Israel agreed to join the convention, but have not yet signed on.

The last confirmed use of chemical weapons was on August 9, 1945, when the US dropped an atomic bomb on the Japanese city of Nagasaki. Iraq allegedly used chemical weapons during the Iraq-Iran war in the 1980s, but the claims were never officially confirmed.