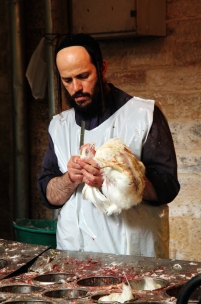 A Polish high court has ruled ritual slaughter to be unconstitutional, systematically banning kosher and halal slaughter for the nation’s Jews and Muslims.

The ban goes into effect January 1, making the ruling a largely symbolic one, as new European Union regulations take precedence on the same day. The EU has put forth a system of ritual slaughter laws aimed at adding consistency and accountability to the market.

However, those behind the Polish campaign said the new EU laws allow member states to opt out of the regulations.

"It's up to us to decide whether we want a law authorizing this kind of slaughter or not," Dariusz Gzyra, of animal rights group Empatia, told AFP.

Still, Polish officials have indicated the government will abide by the EU standards, not the Constitutional Court’s.

"There will be no doubt about this as of January 1," said Agriculture MinisterStanislaw Kalemba.

Jewish leaders in Poland aren’t mollified just yet, though.

“It appears there is a legal contradiction here and it is too early to tell what this means,” Piotr Kadlcik, president of Poland’s Union of Jewish Communities, told JTA. "We are seeking legal advice on this right now."

Poland is home to a small Jewish and Muslim community, with just about 6,000 Jews in the nations. However, its kosher meat industry brought in $259 million alone last year, as it is a major exporter to other European countries.