President Obama will be forced by circumstances to apologise: Genuine Birth Certificate surfaces 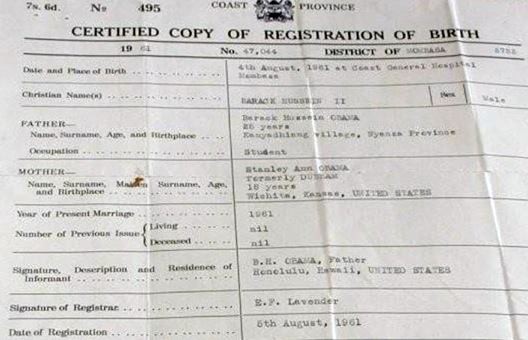 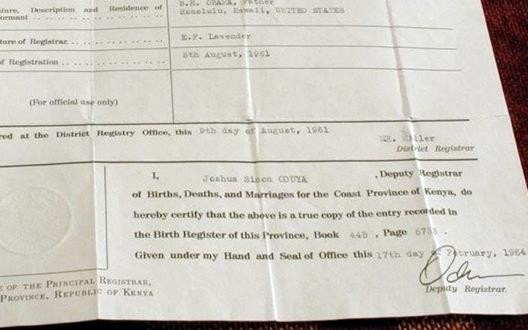 President Obama will be forced by circumstances to apologise: Genuine Birth Certificate surfaces – Americans have been led to believe otherwise, revelation to change the political landscape

Now it is here and places the president in the African continent. The debate surrounding it will now end after the revelation, and those who have not been telling the truth will have to be made answerable one way or another.

The revelation, however, coming during this election year 2012 is doing no good to the democratic party.

API on Tuesday the 6th March evening received President Obama’s genuine birth certificate. API decided not to hurry in publishing it immediately because we wanted to be sure of the content value.

API will scan in here a letter from Coast Provincial Birth Registration Office in the next few hours or days, depending on how quick API is cleared to do so.

The purpose of scanning the official letter is to ensure that what we have received as you see here is fully collaborated officially.

Everyone knows that the documents are very sensitive and are not for misuse by any person to gain upper hand in political games.

It is, however, fair that the whole truth is brought to light and have the whole saga put to rest once and for all.

Many people seem to be of the opinion that there is a plan to hide from them the real thing. The US President says he is born in Hawaii. Many documents being circulated worldwide says otherwise. Therefore, it is very important to be outright and get the real thing on the table without witch hunt or without trying to malign the president’s name, unless the truth is not what he personally has said.

A duly signed official letter and a very special document will be scanned here for all to see – this comes in a few hours or days, depending on how quick API gets the clearance to do so. The two documents will put the issue to rest and clear the air once and for all who wish to know the true facts of this case file that has bothered a section of the American people!

It is only reasonable to continue working on this case in order to reveal the truth of the matter.

Another issue important to consider is why many are so interested in this. If Obama has ruled now for three good years and is now in his fourth year – and already asking for another term that will give him new 4 years in the White House, is there any wrongdoing when he actually has delivered leadership and continues to do so? He has not run down the country, so what is all the farce about where he is born? After all, he has lived in the US all his life.

Should President Obama be impeached or forgiven if found to have intentionally hidden the truth about his birth place and birth certificate?
http://africanpress.me/2012/03/09/president-obama-will-be-forced-by...