President Trump and first lady Melania Trump shared their inauguration dance to "My Way" by Frank Sinatra. They were joined on stage by Vice President Pence, Karen Pence and other members of the first family.

President Donald Trump and First Lady Melania Trump ended a whistle-stop tour of inaugural balls on Friday at a gala for the armed forces.
After appearing at the Liberty and Freedom Balls at the Washington Convention Center, the first couple arrived at the National Building Museum shortly before 11pm to attend the tribute event where they danced with servicemen and women.
Earlier, the newly-sworn in president told thousands of well-heeled guests: 'Now the fun begins.'
In her first public remarks since taking on her new role, Melania, dazzling in a one-of-a-kind Hervé Pierre gown, said she was 'honored' by the privilege.
Egged on by her husband, who spoke with troops at Bagram Air Base in Afghanistan via video conference moments earlier, she vowed: 'We will fight. We will win. And we will make America great again.'
The president's motorcade then traveled to Trump International Hotel where an unofficial dinner was being held. 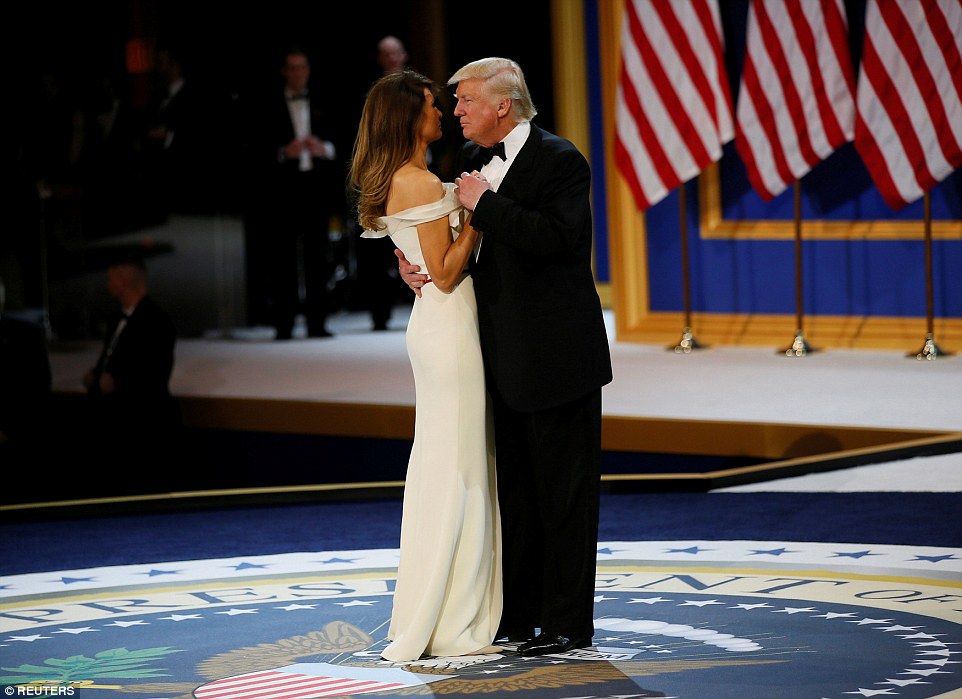 President Donald Trump with First Lady Melania Trump at the Freedom Ball, the second of three galas he attended on Friday to celebrate his inauguration The president and first lady dance to 'I Will Always Love You' at the Salute to the Armed Forces gala at the National Building Museum on Friday The first couple danced with servicemen and women at the event held at the National Building Museum. President Trump was paired with Navy Petty Officer 2nd Class Catherine Campbell and the first lady danced with Army Staff Sgt Jose A. Medina 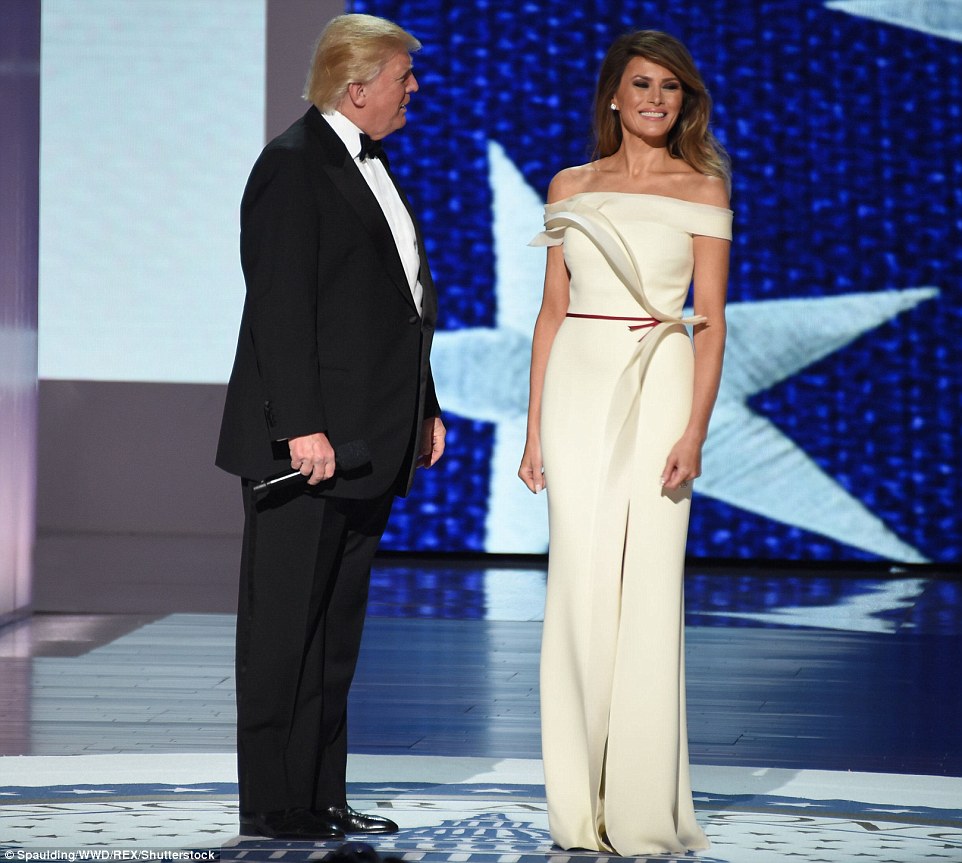 The first lady wore a white gown she co-designed with Hervé Pierre, one of Carolina Herrera's former staff

President Donald Trump triumphantly greeted supporters at the first of three inaugural balls on Friday night, joining his stunning first lady on stage to tell them: 'Well, we did it. We did it. We began this journey and they said we, we, and me, we didn't have a chance but we knew we were going to win and we won.'

The pair made a stylish entrance to the Liberty Ball at the Washington Convention Center, arriving just after 9.30pm to take their first dance as POTUS and FLOTUS to 'My Way'.

The first lady dazzled in an ivory Hervé Pierre gown which featured a crimson waist ribbon while the president stuck to a traditional tuxedo.

After dancing alone for the song's first verse, they were joined on stage by Vice President Pence and Second Lady Karen Pence.  The whole family was then invited to join the couple on stage.

In a brief speech before his dance, President Trump again taunted his critics.  'Today we had a great day. People that weren't so nice to me were saying that we did a really good job today. 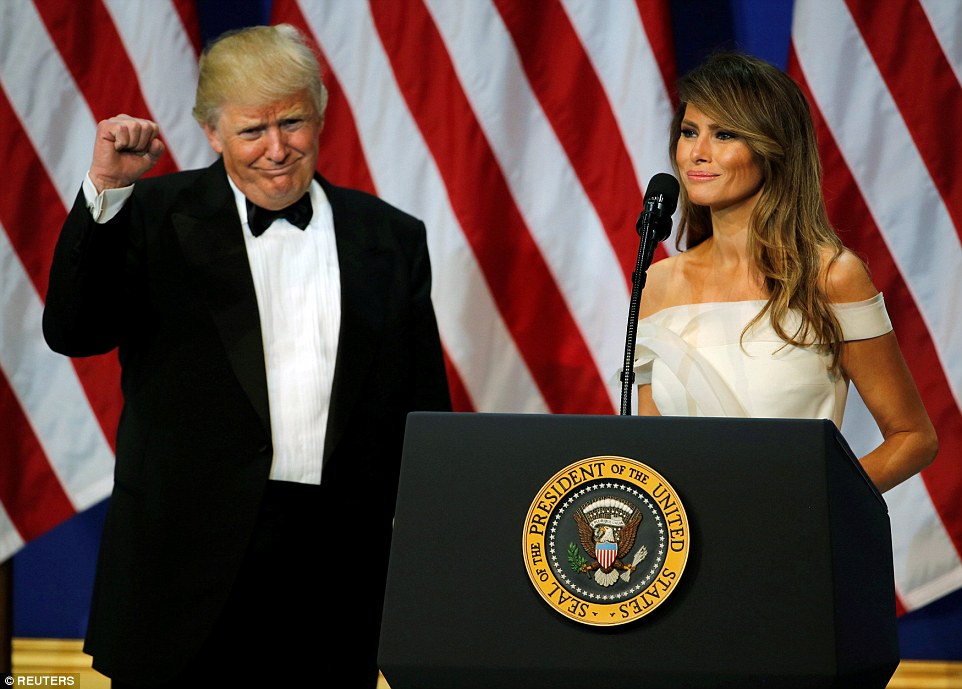 In her first public remarks since becoming First Lady, Mrs Trump said she was 'honored' by the role after thanking the room of veterans and their families for their service 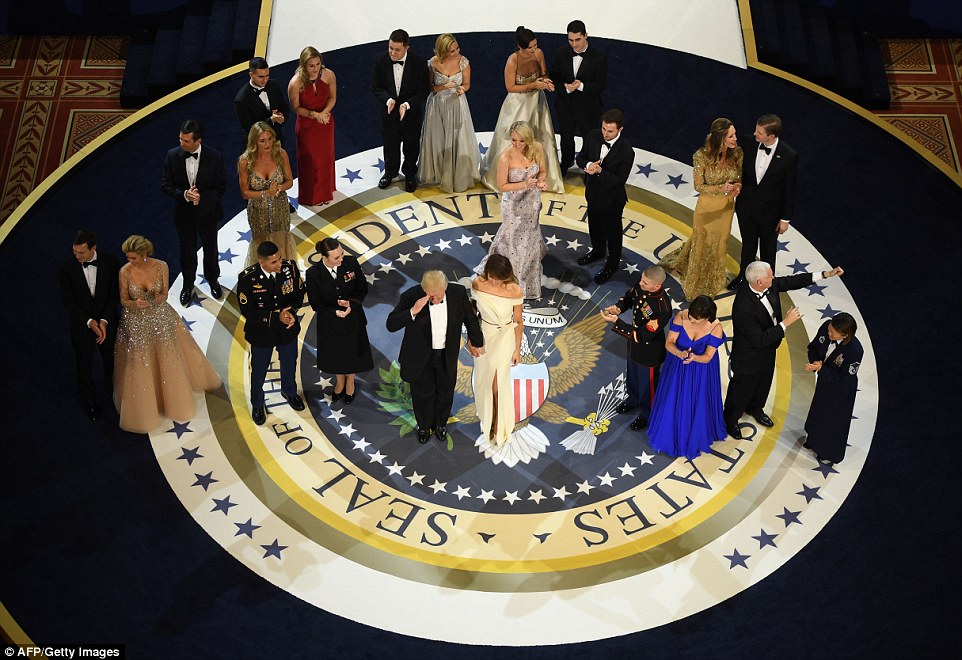 First Lady Melania Trump enjoys a dance with US Army Staff Sergeant Jose A. Medina at the Armed Services ball President Trump and Vice President Pence cut a cake after dancing at the event, following in the tradition of inaugural balls past 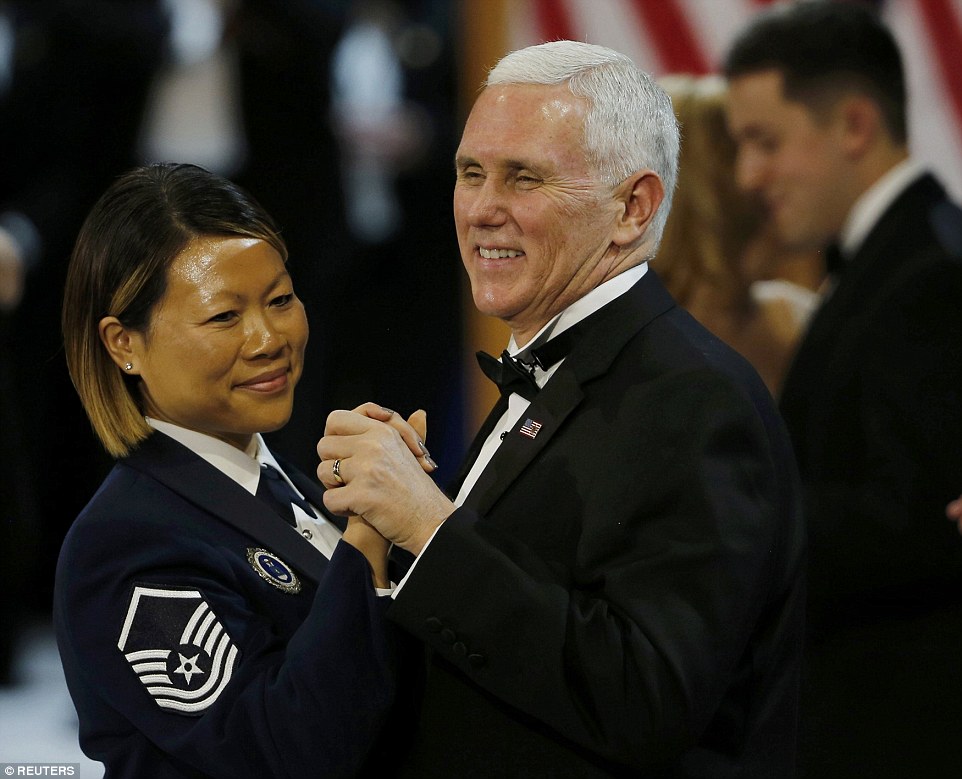 At the first ball of the night, President Trump invited his adult children on stage after his first dance with the first lady at the first of three inaugural balls in Washington on Friday night. Vice President Pence and his wife Karen also included their family President Donald Trump dances with First Lady Melania Trump to 'My Way' at the first of three inaugural balls on Friday after being sworn in as the 45th President of the United Status
http://www.dailymail.co.uk/news/article-4142094/President-Trump-goe...