Putin warns US against rearming Georgia 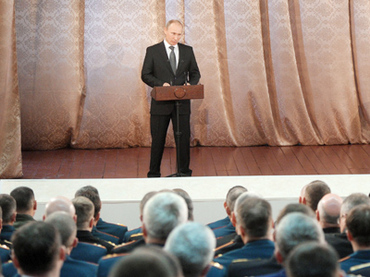 Vladimir Putin said that Russia still hoped to become friends with the Georgian people and criticized the US authorities for rearming the current Georgian regime.

At the meeting with military commanders in the Moscow Region Putin said that the severing of relations between Russia and Georgia was not Russia’s fault or initiative.

“This was the result of the policy that the Georgian authorities conducted back then and still attempt to conduct now,”Putin told the officers. “But we never equated the Georgian authorities with the Georgian people. And I still very much hope that this really brotherly nation will finally understand that Russia is not an enemy, but is a friend and the relations will be restored,” the Russian PM affirmed.

Putin also called a mistake the US activities aimed to increase Georgia’s military potential and warned Georgia against repeating attempts at aggression.

Putin was commenting on recent media reports that read that the US and Georgian leaders had agreed on weapons supplies to Georgia at the recent summit in Washington.

“I was not hiding under the table and I do not know what their agreements were. But I hope that one of us was there and he will tell us about it,” Putin joked.

He added that the fact that the US was arming Georgia was no longer a secret.

“We judge not by the words, but by the actual actions that can be easily monitored by our intelligence services. The movement of sea vessels, the cargo volumes can be easily controlled by the space surveillance facilities and other surveillance means. Some of them were demonstrated to me here today,” Putin said, adding that according to the received data, the USA started to rearm Georgia right after the military conflict in South Ossetia and Abkhazia in 2008.

“Our American partners are making a mistake. We tell them this all the time. And I hope very much that the Georgian side will have enough common sense and these weapons will not be used in a new aggression,” the prime minister noted.

Putin announced that Russia will strengthen its anti-aircraft forces, the anti-aircraft belts around Moscow and strategic bases, build new radar stations and develop the weapons systems that could break any missile defense.

“Even now the Topol-M and the sea-based Yars are the missiles of the new generation. It is possible to say that we are ahead of our American partners as they still have the modernization of their nuclear potential ahead of them,” Putin noted.