Recall Every Congressman Who Voted for the NDAA April 30 , 2012 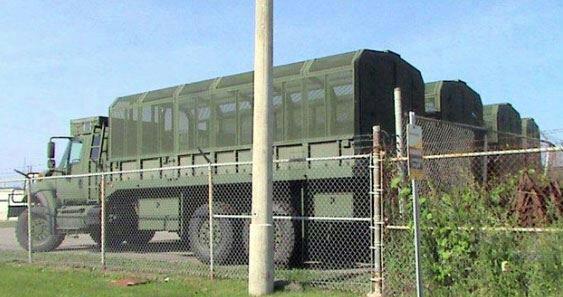 Fair Warning or Fearmongering? What do YOU think?

National defense forces of Iraq, Afghan police and military and Canadian military all use it.

Just under 10,000 ordered by the U.S. and judging by the paint scheme on it, it is not going overseas...

Yesterday, I received the following email:

Deceive ourselves??? Is this is some kind of sick joke? Can there be any doubt? Most Americans still labor under the idiotic delusions that we were attacked by Muslim "Terrorists" on September 11, 2001, and that the nonstop serial wars in southwest Asia are about fighting terrorism. Yeah! "Its all about protecting our freedoms." So BHO just tell boobus americanus that these trucks will used to hall "terrorists." But, consult with your masters first!

Let’s Not Deceive Ourselves

http://theintelhub.com/2012/04/26/unusual-transport-vehicle-causing... This is the Navistar 7000. The truck comes in different configurations and is used by the military. This particular version is equipped with benches and enclosed in a heavy wire mesh. This version is showing up in increasing numbers throughout the country. It is designed to carry prisoners.
Let's add some things up and ask is there any probability they are connected?

In 2007 it was reported several manufacturers were awarded contracts to build prison like box cars for hauling prisoners.
Source: http://anthonylemons.blogspot.com/2007/06/manufacturer-gets-contrac...
http://www.rense.com/general58/fearthecomingtrain.htm

Congress funded the building of Internment Camps IN America. Brown and Root got contract to build them.
Source: http://www.americanfreepress.net/html/camps_for_dissidents_190.html
http://www.globalresearch.ca/index.php?aid=12793&context=va
http://www.apfn.org/apfn/camps.htm
http://www.newswithviews.com/baldwin/baldwin527.htm

The military created and now is advertising for "Internment/Resettlement (I/R) Specialists in the Army are primarily responsible for day-to-day operations in a military confinement/correctional facility or detention/internment facility."
Source: http://usmilitary.about.com/do/enlistedjobs/a/31e.htm

"In the final hours before adjourning in 2006, Congress passed and the president signed the Military Commissions Act (MCA). In doing so, they cast aside the Constitution and the principle of habeas corpus, which protects against unlawful and indefinite imprisonment. They also gave the president absolute power to designate enemy combatants, and to set his own definitions for torture."
Source: http://www.ACLU.org/national-security/military-commissions-act-2006

Plenty of other sources. Just Google, "Military Commissions Act"
Congress passes and President Obama signs into law the NDAA of 2012 which provides for the indefinite imprisonment of U.S. Citizens who are merely accused of being associated with terrorism. They do not have to be convicted. There is no due process of law as the Constitution requires.
Source: http://www.ACLU.org/blog/national-security/president-obama-signs-in...

Growing concern about the dictatorial powers being accumulated by the President has caused a movement among the states to nullify the NDAA of 2012 if used against the Citizens of that State.
Source: http://targetfreedom.com/cfr/ndaa-nullification-becomes-law-in-Virg...

Congress authorizes 30,000 drones to fly and monitor America. Formerly the top General in Afghanistan, David Petraeus, is now the head of the CIA. WIRED, a zine that reports on high tech advancements, covered a summit where Director Petraeus spoke of the CIA's ability to monitor our daily lives while in our homes.
Why would a government want to put 30,000 drones in our skies and monitor our every movement - even in our homes - UNLESS this government is planning something they believe would cause a strong adverse reaction by the public and they need to be able to control all possibilities.
Source: (http://www.washingtontimes.com/news/2012/feb/7/coming-to-a-sky-near... )
The Government is preparing to monitor the Citizens in what was once the privacy of your own home. You will not be able to express your most intimate thoughts in what WAS the privacy of your own home without the government hearing it, and being aware of everything you do.
Source: http://www.wired.com/dangerroom/2012/03/petraeus-TV-remote/

Never forget - Monitoring IS Controlling. Grasp the implications of that truism.

This is what YOUR America is morphing into. Why don't you connect the dots and see where they lead.
A most interesting indisputable fact is that it has not mattered if there was a Republican President (George Bush) or a Democrat President (Barrack Obama), or a Democrat controlled Congress or a Republican controlled Congress. The march to tyranny has gone unobstructed.

". . . Let us not deceive ourselves, sir. These are the implements of war and subjugation; the last arguments to which kings resort. I ask gentlemen, sir, what means this martial array, if its purpose be not to force us to submission? Can gentlemen assign any other possible motive for it? Has Great Britain any enemy, in this quarter of the world, to call for all this accumulation of navies and armies? No, sir, she has none. They are meant for us: they can be meant for no other. They are sent over to bind and rivet upon us those chains which the British ministry have been so long forging. . . ."

*Note: Some of you may say this is fear mongering. If you asked me about it this time last year, I would have said the same. Today, in light of the many draconian bills that have already become law (NDAA, H.R. 347, H.R. 658, the NDRP and soon, or so it appears - CISPA), I now think this is simply a forewarning.

What do you think?

Your Right about that Kerry!

Pam, habeas corpus is a writ requiring a person to be brought before a judge or into court, esp. to investigate the lawfulness of his or her detention. (L, = you must have the body. A writ to produce a prisoner before a court, with particulars of the day and cause of his arrest and detention, in order that the justice of this may be determined. Habeas Corpus Act: Act 31 Charles 11, c. 2 (1679), authorizing this. Transference, relocation, bussing, commuting, shuttling; shifting, shift, drift, longshore d,. continental d. Command, royal c., summons; commandment, ordinance; injunction, imposition; dictation, bidding, behest; dictum, say-so. Litigation, going to law, litigiousness.

Whether one is a Judge or the U.S. President, all lawful authority therefore must under the law abide by the Statute Act within the Constitution, which by the way cannot be altered in anyway by the US Congress or by the President himself who must abide by the Constitution Act and not by using Executive Powers. To do otherwise amounts to high treason and death by hanging. Please note, President Barrack Obama is not a lawful citizen of the United States and should be deported back to his homeland of Kenya as an illegal alien of the United State of America, so help him God: