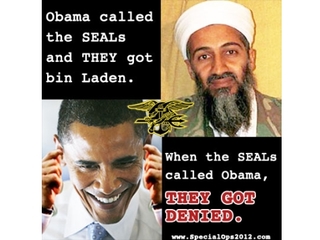 Today, the founders of Special Operations Speaks PAC – an organization founded by Special Operations veterans dedicated to protecting our forces at home and abroad – released the following statement after Facebook twice censored their meme criticizing President Obama for refusing to save the lives of former Navy SEALS in Benghazi. The meme simply stated, “When Obama called the SEALs, they got bin Laden. When the SEALs called Obama, they got denied.”  The meme spread virally throughout Facebook’s network and within in 24 hours almost 30,000 people shared and hundreds of thousands viewed the meme.

The meme was taken down for an unspecified violation of Facebook’s terms of Rights and Responsibilities.

“It looks like Obama’s liberal followers in Facebook HQ are terrified of how damaging the Benghazi scandal is for the President. We understand that Facebook can run their site however they’d like, but when they’re trying to quietly squelch opposition to what is a clear leadership failure that resulted in the tragic deaths of some of our nation’s heroes, they deserve the to be called out on it,” said Larry Bailey, CAPT (SEAL), USN (Ret).

“We are paying advertisers on Facebook. It is outrageous that Mark Zuckerburg, founder of Facebook, who worked to elect Obama in 2008, would sell out patriots who made the ultimate sacrifice – all to serve the political ambitions of the man who let them die.”

“Americans across the country deserve the truth about what happened in Libya, and they certainly deserve to know when people who hold the keys to a lot of their online communications are trying to keep that from them,” continued Colonel Dick Brauer, Jr., USAF (Ret).

“This whole affair has become the poster child for liberal arrogance and incompetence – from the President’s complete leadership failure in Libya to the liberal media’s desperate efforts to keep this out of the hands of the American people across the spectrum from broadcast news to social media. I hope they’ll stop this shameful game and stop sacrificing the truth – and Americans abroad – in the name of politics.”

Special Operations Speaks PAC is comprised of veterans, legatees, and supporters of the Special Operations communities of all the Armed Forces and have noted with dismay and deep alarm the recent stream of highly damaging leaks of information about various aspects of America’s shadow war in the overall War on Terror.  Our principles are the same as when we were in active service — Duty, Honor, Country.


A member of our team accidentally removed something you posted on Facebook. This was mistake, and we sincerely apologize for this error. We've since restored the content, and you should now be able to see it.

Note: Facebook removed the post two times and suspended our account for 24 hours.We accept their apology but do not accept that it was an innocent mistake. It was clearly a means to protect Obama on Libya.