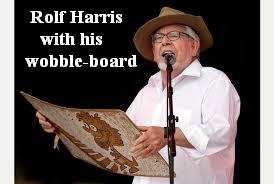 Those were the days when Rolf made us laugh. Now he's portrayed as someone evil?

Give Rolf Harris his dues, he was and still is a funny comedian on stage. Why did he grope girls forty-years ago, because back than it was the norm, gee even I was groped by my workmates and I never thought it was funny, but it went on for decades especially in the entertainment industry and no-one gave a hoot to what went on back then. Rolf Harris some bimbos on stage in front of everyone, not in some backroom hidden from public view. So why was he sentenced to prison now. The seven-year-old-girl Rolf groped was indecent, that wasn't sexual and it certainly was disgusting too say the least. Then there was his daughters friend that Rolf admitted having consensual sex with, Rolf should have known better then to get involved in that affair because of her age and been a friend of the family. All those alleged victims are coming out of the woodwork to cash in on his wealth, why after 40-years is the big question.

Most of the crowns evidence is all hearsay without real facts and than too lay false accusations upon his person at Rolf Harris's court trial and was found guilty by the jury.

Rolf Harris has coined a new song from his cell about these bimbos that put him in prison, the lyrics go like this ... "Climb up out of the woodwork babe, from 40 years ago. The climate's great in Britain now for making loads of dough. You've festered down there long enough, time's right to grab your chance. Clap eyes on a rich celebrity and make the bastard dance."

Harris describes those victims" quest for justice and compensation by saying. " Join the feeding frenzy, girls" And the chorus of the song, which is unfinished and as yet untitled, reads. "Make him squirm, slimy little woodworm, make him squirm, squirm, squirm." Great tune Rolf.

P.S. Groping people forty-years-ago was not deemed a sexual assault like it is today!