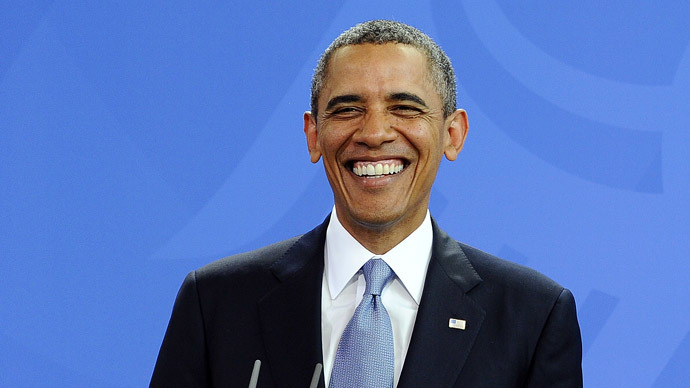 A Russian senator has asked the Nobel Committee to annul the award given to the US President last year claiming Barack Obama’s double standard policy has helped develop the political crisis in Ukraine.

“The double standard policy is incompatible with the title of Nobel Peace Prize laureate. I think the Nobel committee must take an objective look at the situation and consider the possibility of taking the title from Barack Obama,” Senator Lyudmila Bokova (Saratov Region) was quoted as saying by the Izvestia daily.

“The latest statements and activities of Mr. Obama are clearly aimed against the non-violent solution of the Ukrainian crisis. Besides, the US President is pursuing the objective of world domination and the interests of the Ukrainian people is the last thing to be taken into consideration by him,” the Russian politician said.

Bokova added she had thoroughly studied Barack Obama’s Nobel speech and everything in it was right, but the US President’s own actions now contradict his position.

The United States has stopped being a guarantor of international security and is only forcefully imposing its own interests and values upon other nations, the senator added.

“The double standards policy has become America’s main modus operandi on the international arena. The whole world has repeatedly witnessed that applying double standards is not only inadmissible but also dangerous as it leads to uncontrolled outbursts of violence and Human Rights violations,” Bokova said.

On Friday last week Russia’s Upper House passed a motion condemning the sanctions the United States and the European Union imposed on Russia over the Ukrainian crisis and the accession of the Crimean Republic into the Russian Federation. Earlier last week State Duma deputies suggestedWestern nations imposed personal sanctions on all of them, expressing solidarity with blacklisted colleagues.

In November last year two Russian NGOs, Officers of Russia and Soldiers’ Mothers, asked the Nobel Committee to evaluate the information according to which Barack Obama had noted he was ‘very good at killing people’ while discussing drone warfare with his close aides. Russian activists claimed that these words were hardly compatible with the title of a Nobel Peace Prize laureate. They also added that the Peace Prize bestowed on Obama was a sort of 'advance' given in return for promises and press statements made during the previous election campaign, but in reality the deeds of the US leader contradict his earlier rhetoric and this means that the ‘advance’ can be rescinded.