Footage of the oil spill in the North Sea has been released by Marine Scotland.

More than 200 tonnes of oil could have entered the North Sea after Shell's recent spill, it has been estimated.

A leak in a flow line leading to the Gannet Alpha oil platform 113 miles (180 km) off Aberdeen was found last week.

The Department of Energy and Climate Change said it was a "substantial" spill, but should disperse naturally.

Glen Cayley, technical director of Shell's exploration and production activities in Europe, said: "It is not easy to quantify the total volume spilled but we estimate so far that it is around 216 tonnes.

"However, in terms of the volume on the surface, which changes from day to day, it is estimated today at about one tonne.

"This is a significant spill in the context of annual amounts of oil spilled in the North Sea."

He added: "The high winds and waves over the weekend have led to a substantial reduction in the size of the oil sheen as can be seen from the current levels on the water.

"We care about the environment and we regret that the spill happened. We have taken it very seriously and responded promptly to it."

On Monday afternoon, Shell said that the sheen from the "light crude oil with a low wax content" was 0.5 square kilometres in size.

A DECC spokesman said: "Shell has informed us that the oil leak at its pipeline at the Gannet Alpha platform east of Aberdeen is under control and has now been greatly reduced.

"They are working to completely halt any further leakage.

"DECC's environmental inspectors will continue to monitor the situation and have been working closely with the company and counterparts from the Health and Safety Executive, Maritime and Coastguard Agency and Marine Scotland since the spill was reported last week."


The spokesman added: "Although small in comparison to the Macondo, Gulf of Mexico, incident, in the context of the UK Continental Shelf the spill is substantial.

"But it is not anticipated that oil will reach the shore and indeed it is expected that it will be dispersed naturally.

"Current estimates are that the spill could be several hundred tonnes."

Scottish Environment Secretary Richard Lochhead said: "We take any oil leak extremely seriously, as the first minister has made clear, and we are continuing to monitor this situation very closely. 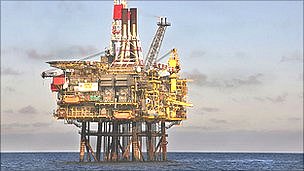 "While there are inevitable difficulties verifying the extent and size of the leak, it's vital that Shell and DECC make information available on an open, transparent and regular basis."

Stuart Housden, director of RSPB Scotland, said: "We must ensure that those involved are equipped with all the necessary information in order to take the appropriate course of action.

"Communication and sharing knowledge is key at this stage.

"RSPB Scotland is ready and willing to offer its advice on how best to protect seabirds at risk, but we cannot do this without monitoring by the relevant agencies and sharing the details of what this monitoring has shown.

"We know oil of any amount, if in the wrong place, at the wrong time, can have a devastating impact on marine life."


Industry body Oil and Gas UK said procedures are in place to deal with the leak.

Earlier Greenpeace also expressed concern about the lack of information coming from Shell.

The Gannet oil field reportedly produced about 13,500 barrels of oil per day between January and April of this year.

The field is co-owned by Esso, a subsidiary of US oil firm Exxon, but is operated by Shell.

Comment by Mother of Seven on August 15, 2011 at 7:34pm
No mater where you look or where you go, it seems impossible to get away from the toxins. Were being poisoned, wake up and do something about it!