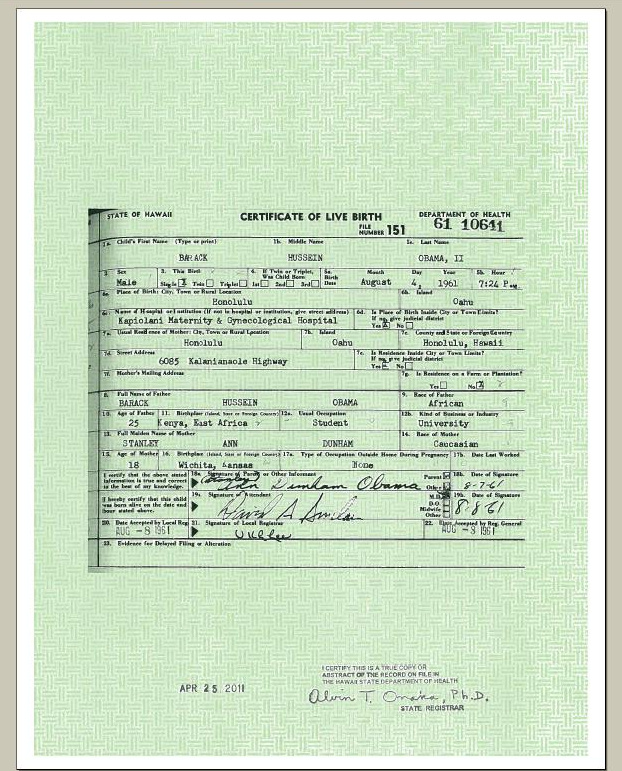 Maricopa County Sheriff Joe Arpaio in Arizona has constituted a special law enforcement posse to investigate allegations brought by members of the Surprise, Ariz., Tea Party that the birth certificate Barack Obama released to the public April 27 might be a forgery, WND has learned.

The posse, under the authority of Arpaio's office, will consist of two former law enforcement officers and two retired attorneys, headed by Michael Zullo, a retired police detective originally from Bergen County, N.J.

Arpaio spokesman Lt. Justin Griffin told WND that Arpaio's posse will consist entirely of volunteers and will avoid incurring any cost to the taxpayers of Maricopa County.

"I am very grateful that Sheriff Joe Arpaio is a sincere man of his word and a fearless, patriotic American," Brian Reilly, a spokesman for the Surprise Tea Party, told WND.

The document in question, which has been described as a fraud by numerous analysts and experts in imaging, documents and computers: (ABOVE)

Reilly had less kind words for his representatives in Washington, D.C.

"Congress should be ashamed," he said. "They didn't even have the backbone to uphold their constitutional oaths of office to initiate this investigation."

Arpaio's move is unprecedented in that WND research can find no other instance in United States history in which a county sheriff's office has undertaken an investigation of a document pertaining to a sitting United States president.

Arpaio's decision follows a meeting held in his office Aug. 17 with a group of Surprise Tea Party representatives, including Reilly. Four days later, the group presented a formal letter to Arpaio expressing concern that should Obama use a forged birth certificate to prove his eligibility for the 2012 presidential ballot in Arizona, the voting rights of the residents of Maricopa County could be irreparably compromised.

WND reported Aug. 21 that the letter formally stated the following charge: "The Surprise Tea Party is concerned that no law enforcement agency or other duly constituted government agency has conducted an investigation into the Obama birth certificate to determine if it is in fact an authentic copy of 1961 birth records on file for Barack Obama at the Hawaii Department of Health in Honolulu, or whether it, or they are forgeries."

"Having exhausted all available governmental and law enforcement resources at our disposal, we are turning to you as the highest law enforcement officer in Maricopa County where we reside," the Surprise Tea Party explained in the letter.

"We are asking for your assistance because you have a demonstrated history of enforcing Arizona laws in Maricopa County, even when enforcing those laws is unpopular in Arizona or out-of-favor with the wishes of a federal government that may choose to ignore the law to the detriment of the residents of Maricopa County."

"But, quite frankly, Sheriff Arpaio, you are our last resort to see Arizona statutes enforced to preserve the integrity of Arizona election law," the letter continued.

Read the letter in its entirely here.

Reilly told WND that he and the Surprise Tea Party believed the posse constituted by Arpaio was an appropriate response to their written request.

"We picked the right man, in the right county, in the right state, at the right time to determine the truth about who Barack Obama is and whether he has presented a fraudulent or authentic birth certificate to the American public," Reilly said. "With God's help, Sheriff Arpaio will find the truth."

In addition to the letter, the Surprise Tea Party delivered to Arpaio a petition with 242 signatures that were obtained at the Aug. 17 meeting.

The group also gave to Arpaio a binder containing the published reports of 20 experts with established credentials who conducted a forensic examination of the computer PDF file published on the White House website and the photocopies of the Obama birth certificate handed out by the White House to the press during the April 27 press conference.

The Arizona State Legislature on April 15 passed a bill that would have required candidates for the presidency to prove to the Arizona secretary of state their eligibility to be president under Article 2, Section 1 of the Constitution. Arizona Republican Gov. Janet Brewer, however, vetoed the bill.