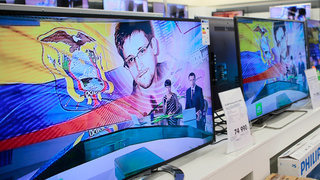 A trove of classified documents supplied to The Guardian newspaper by NSA leaker Edward Snowden has been copied and shared with several people around the globe, journalist Glenn Greenwald told The Daily Beast on Tuesday.

Greenwald, the Guardian reporter who first began publishing National Security Agency documents earlier this month after meeting with the former intelligence contractor, told journalist Eli Lake that Snowden made arrangements to ensure others around the world have encrypted copies of that information should any circumstances allow the data or its source to be compromised.

Snowden “has taken extreme precautions to make sure many different people around the world have these archives to insure the stories will inevitably be published,” Greenwald said. He added that the files are “highly encrypted” and corresponding passwords to render them readable have not yet been distributed.

According to Lake, Greenwald said, “if anything happens at all to Edward Snowden, he told me he has arranged for them to get access to the full archives.” Greenwald previously claimed that Snowden provided him with the archives of "thousands" of documents, dozens of which he considered to be newsworthy. Revelations published thus far by The Guardian and attributed to Snowden have generated international headlines and responses from presidential administrations worldwide.

The latest news from Greenwald comes in the midst of an international manhunt for Snowden that has made awkward the relations between the United States and other nations around the globe. The US unsealed an indictment against Snowden on Friday, but has been unable to extradite him to the country where he faces charges of espionage.

Snowden was reportedly in Hong Kong at the time his indictment went public and was alleged to be in Moscow hours later. Representatives for US President Barack Obama and Russian President Vladimir Putin both say Snowden is in Moscow, and the anti-secrecy website WikiLeaks says the leaker has sought asylum from Ecuador, Iceland and perhaps elsewhere.

“We are aware of where Mr. Snowden is,” WikiLeaks editor Julian Assange said in a conference call on Monday. “He is in a safe place and his spirits are high. Due to the bellicose threats coming from the US administration we cannot go into further detail at this time.”

The US has lambasted Hong Kong with failing to comply with what America considers a lawful arrest, and Russia will not cooperate with attempts for extradition. White House press secretary Jay Carney said earlier this week that Hong Kong’s failure to act has already strained the relationship between the US and China.

Another relationship — the one between Snowden and Greenwald — has begun to emerge as a contested topic within the conversation as well in recent days. The possibility of charging Greenwald with publishing the classified documents has been discussed by politicians, pundits and the press, and the he told The Daily Beast that he’s likely having his every move watched by Washington.

“I would be shocked if the US government were not trying to access the information on my computer,” Greenwald said. “I carry my computers and data with me everywhere I go.”

Elsewhere in his interview with Lake, Greenwald explained that one potential lapse almost led to the loss of the intelligence.

“When I was in Hong Kong, I spoke to my partner in Rio via Skype and told him I would send an electronic encrypted copy of the documents,” Greenwald said. “I did not end up doing it. Two days later his laptop was stolen from our house and nothing else was taken. Nothing like that has happened before. I am not saying it’s connected to this, but obviously the possibility exists.”