‘Snowden will never be safe again’ 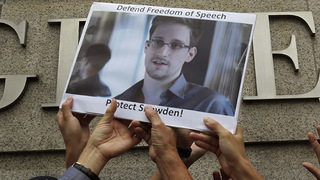 Fallout surrounding the NSA leaks will likely shield Edward Snowden from extra-judicial capture in the short term. However, some analysts say Washington’s long memory almost guarantees the whistleblower will never again be secure.

On Sunday a spokesperson for the Hong Kong government confirmed that Snowden had "legally and voluntarily" left the country after spending just over a month in the former British colony.
Snowden originally took shelter there in a bid to fight extradition to the United States, where the former National Security Agency [NSA] contractor was recently charged with espionage for leaking classified details of the agency’s mass surveillance programs.
After a brief stopover in Moscow, Snowden is expected to depart to an as of yet unnamed “third country,” with the media speculating that Iceland, Venezuela and Ecuador are among potential countries where the whistleblower could make his final asylum bid.
Andrew Feinstein, a former whistleblower and director of Corruption Watch UK, argues Snowden’s aversion to facing down the US “national security state” will likely prompt him to continue traveling to encumber US efforts to launch legal proceedings against him.
Feinstein believes that both US and British authorities have adopted a position of toughing out the fallout from Snowden’s revelations, downplaying the nature of the leaks while concurrently claiming the information which was culled was done so in the public interest. However, concerted attempts to “diminish the messenger” will prove difficult, leaving Snowden a thorn in the side of Washington.
Although the United States will continue in its pursuit of Snowden, journalist Paul Lashmar believes Snowden can put off the prospect of being sent back to the United States to face prosecution indefinitely. Lashmar believes that the scope of the intelligence apparatus deployed against both US and foreign targets “is quite damaging,” increasing the likelihood that any rendition operation to capture Snowden “would go down very badly.”
“Sending a snatch squad into a country to have him arrested would probably be not a very smart move in my estimation,” Lashmar asserts.
However, Lashmar argues the complications of getting Snowden in their possession will not soften the US line again him.
“I think it [NSA surveillance] is making a lot of people in America uneasy. There is a discussion. But I think the nature of American society is that the government will seek to prosecute him for this. I don’t think they’re going to say, ‘thanks Edward for bringing this to our attention, we think we’ve probably been going too far. Thank you. You’re now a hero’. I don’t think that is going to happen.”
Intelligence analyst Glenmore Trenear-Harvey is less optimistic about Snowden’s chances, arguing that the nature of the criminal charges filed against him “are such that an international warrant can be issued for him.”
Trenear-Harvey says the massive scope of US intelligence means Washington is already aware of his movements to some extent, as well as any potential communications with supporters in Iceland, Venezuela or Ecuador.
Regardless of how long it takes to eventually track him down and the complications of bringing him before the US legal system, even a successful asylum bid will never provide for Snowden’s long-term security, Trenear-Harvey concludes.
“The United States, like Russia, has a very long memory. They also have people who could indeed take people out of different countries. So, I don’t think he’ll ever be safe. I think he’ll always be looking over his shoulders and certainly the US government who has been so embraced by this will not give up easily.”