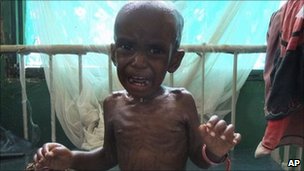 The first flight, with 10 tonnes of nutritional supplements for children, has landed in the capital Mogadishu, an African Union official told the BBC.

Millions in Somalia and across the Horn of Africa face dire food shortages in the worst regional drought for decades.

The Islamist al-Shabab militia, which controls much of Somalia, has banned the WFP from its areas.

The delivery was to have begun on Tuesday but was delayed from leaving Kenya by bureaucratic hurdles.

Challiss McDonough, a spokeswoman for the WFP, said the 10 tonnes of Plumpy'nut, a peanut-based paste high in protein and energy, would be enough to treat 3,500 malnourished children for one month.

Given the demand for food aid in Somalia, the delivery is just a drop in the ocean, says the BBC's East Africa correspondent Will Ross, in Nairobi, Kenya.

The Plumpy'nut was flown from France to Kenya on Monday.


The delivery is the first airlift of food aid since the UN declared a famine in two southern areas of Somalia last week.

Similar flights are also due to take aid into the Ethiopian town of Dolo Ado, from where it can be moved across the border into Jubaland, a sliver of land held by Somalia's pro-government forces just west of famine-hit Bakool.

The aid is being moved by plane because sending it by boat would take months, said Ms McDonough.

Tens of thousands of Somalis have fled areas controlled by al-Shabab to Mogadishu and neighbouring Kenya and Ethiopia in search of assistance. The weak interim Somali government, backed by an African Union (AU) force, controls only parts of Mogadishu.

A spokesman for the AU force, Lt Col Paddy Ankunda, told the BBC the Boeing 737 delivering the 10 tonnes of supplies had landed at Mogadishu's airport.

Extended drought is causing a severe food crisis in the Horn of Africa, which includes Kenya, Ethiopia, Djibouti and Somalia. Weather conditions over the Pacific means the rains have failed for two seasons and are unlikely to return until September.

An estimated 10 million people in the region are affected by the drought. The UN has declared a famine in two areas of southern Somalia, where 30% of children are acutely malnourished and four children out of every 10,000 are dying daily.

The humanitarian problem is made worse by ongoing conflicts. Militants had lifted a ban on aid agencies operating in parts of southern Somalia, but now say reports of famine are exaggerated and have again limited access.

Since the beginning of 2011, around 15,000 Somalis each month have fled into refugee camps in Kenya and Ethiopia looking for food and water. The refugee camp at Dadaab, in Kenya, has been overwhelmed by an estimated 400,000 people.

Farmers unable to meet their basic food costs are abandoning their herds. High cereal and fuel prices had already forced them to sell many animals before the drought and their smaller herds are now unprofitable or dying.

The refugee problem may have been preventable. However, violent conflict in the region has deterred international investment in long-term development programmes, which may have reduced the effects of the drought.

The result of climate conditions, conflict and lack of investment is that 6.7 million people in Kenya and Ethiopia are currently existing on food rations, and relief agencies estimate 2.6 million in Somalia will need assistance a new emergency operation.

The AU has 9,200 peacekeepers in Mogadishu to guard the airport and government-held territory in the city.

Somalia is thought to be worst-hit by the crisis, but Ethiopia, Kenya and Djibouti have also been affected.

More than 10 million people in the region are thought to be at risk.

Somali Foreign Minister Mohamed Ibrahim has warned that more than 3.5 million people "may starve to death" in his country.

The Prime Minister, Abdiweli Mohamed Ali, has complained that the UN is being too slow with the delivery of food.

The challenge facing all aid agencies is immense but some analysts are questioning why this emergency was not prevented - as the severe drought and food shortage were predicted late last year, says our East Africa correspondent.

After criticisms that wealthy Arab states were not doing enough to help with the crisis, Saudi Arabia has pledged $50m (£30m) to the WFP to buy food for Somalis, the UN agency has said.

It follows an announcement from the European Union that it would donate $40m on top of the $61m it had already given the drought-hit region of East Africa this year.