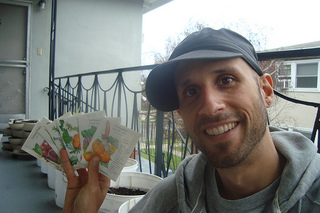 One of the questions that I often get and have had myself for a while is where can you buy non-gmo seeds or seeds from companies that aren’t owned by Monsanto.

Monsanto owns something like 90-95% of the seed companies out there. So the company might not be selling genetically engineered seeds, the money is still going into the pockets of Monsanto. I’m not down with that.

Here are some seed companies that I’ve either worked with or have been highly recommended by others.

A family owned operation right outside of Los Angeles, provides 100% non-gmo, open-pollinated and non-hybrid seeds. When I asked Chris, the owner, this is what he told me:

The industrialized food system has seen significant progress in recent years. While some of those advancements are good, not all have been. Genetically Engineered Seeds are one of those advancements in the industrialized food system that is absolutely wrong. Most don’t understand the prevalence of Genetically Modified foods in grocery stores, how they got there, or the health risks associated with them.

At SeedsNow.com, we are on a mission to help families and communities understand the importance of growing their own Organicfood – wherever they live – because the truth is that anyone can start growing their own.

We’re full supporters of the Safe Seed Pledge and only work with growers who share the same stance against Genetically Modified foods as we do. We will never buy or grow any seed from large corporations that make Genetically Engineered seeds.

Get 10% off your SeedsNow.com order by using the code URBAN10.

I also contacted, Botanical Interests to find out where they source their seeds from and their stance on genetically engineered seeds.

This is the response that I received from one of their representatives:

Botanical Interests has signed the Safe Seed Pledge, meaning that we do not knowingly buy or sell genetically engineered seeds. The future of “safe seed” is a concern for all of us in the industry. It is something that we take very seriously and we are constantly monitoring the news and talking with our growers about it.

We support organic growers, and we’ve been selling organic seed since 2001. The organic certification process is an important one that involves many steps: soil testing for pesticide residue, strict guidelines as to soil amendments that can be used (some soil amendments might contain heavy metal residues), and monitoring general farming procedures used. A lot of companies added organics recently because they saw it as a trend, but we’ve been selling organic seed for the past decade.

Companies that care as much as we do

For this reason, these are companies that I can support and get behind. There are some seed companies out there that sell a small amount of Monsanto seeds (less than 10%), but it’s not like they are weening themselves off and going strictly non genetically engineered seeds.

I know that this is a business decision and much more goes into than I likely know. It’s easy for me to sit here on my laptop and spout off, but it takes action for things to change. Supporting these giants, as small as that support may be, will keep them growing and alive.

When it comes to the choices and purchases that we make, it’s best to know the source of where our stuff (be it food, clothing, seeds or whatever) comes from and support what we believe in. We cannot pretend to be blind to what really goes into and the results of our purchases.