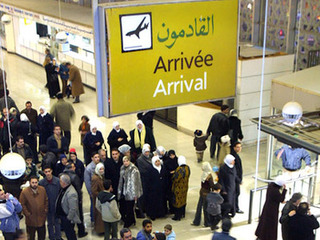 The Free Syrian Army (FSA) gave a 72-hour advance warning to airlines to suspend flights to Syria before the rebels try to seize civilian airports in Damascus and Aleppo. They claim the Syrian Air Force is using them 'illegally.'

The 72-hour period begins on Saturday, September 1, the FSA told Asharq Al-Awsat, the major pan-Arab daily newspaper based in London.
The FSA believes that Syria's civilian airports are being used to support pro-regime military operations.

“The criminal regime of Syria has begun to use civilian airports for take-off and landing of warplanes,” the FSA said.

International law prohibits attacks on civilian airports, whether during internal conflicts or wars between states. Prior to the FSA's ultimatum, some international companies already cancelled flights to Syria over security and cost concerns.

The rebels believe the Assad regime has been forced to use civilian airports for military purposes after an allegedly successful attack against the army's Abu Zuhour airbase in Syria's Idlib province, near the Turkish border. In the attack, rebels claimed they destroyed 10 grounded MIG-23 fighter jets and shot down two others.

Government forces thwarted another opposition attack on the Rasmi al-Aboud airport near the city of Aleppo on Saturday, Syrian state television reports. Images of cars filled with machine guns and other weapons were broadcast, and the UK-based Syrian Observatory for Human Rights confirmed the attack. The group claims many government troops were killed and injured in the assault, though no exact figures were forthcoming.

Syrian state television acknowledged that rebels had targeting the base, but said “the terrorists” were forced to flee after suffering heavy losses.

Speaking exclusively to Asharq Al-Awsat, the FSA's Colonel Riad al-Asaad claimed that all of the downed aircraft – including “eight to ten helicopters” – were damaged with heavy 14.5mm machine guns, and not with anti-aircraft missiles.

In August, NBC reported that two dozen portable surface-to-air (SAM) missiles, possibly Soviet-made, were smuggled through Turkey to the FSA. The weapons may have originated in Libya, where thousands of SAM launchers were stolen from military arsenals after the fall of the regime of Colonel Muammar Gaddafi.

The rebels have requested SAMs to challenge the air superiority of Assad's troops. The Persian Gulf monarchies Saudi Arabia and Qatar support the idea, and said they were ready to pay for the arms.

But many fear that the portable SAMs may end up in the hands of militants with links to Al Qaeda and other international terrorist organizations that have infiltrated the ranks of the FSA.

“First, there is no proof that they will only be targeting government aircraft… I don’t think they have the means to distinguish which are government ones and which are not. The rebels saying they are attacking civilian airports now is just one more step in reveling their terrorist nature,” he said.

Dr. Mohammad supported comments made by Russian Foreign Minister Sergei Lavrov on Saturday, who said it is“absolutely unrealistic” to expect the Syrian government to “unilaterally capitulate.” He claims the West contradicts itself in claiming its desire to protect civilians, when its actions are directly fueling the ongoing conflict.

“The only reason the rebels are still fighting until today is because they enjoy logistic, weapons and financial support from many countries.  What Mr. Lavrov said is very important. How can you ask a national army in any country in the world to stop fighting rebels [whose] existence you recognize…what do you expect the army to do,” he said.