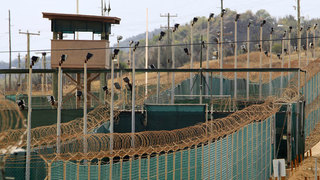 Defense attorneys for the Guantanamo Bay detainees charged with plotting the September 11, 2001 terrorist attacks told the court this week that the Wi-Fi connection at Starbucks was more secure than the Pentagon’s own system.

Lawyers for the accused terrorists said in pretrial hearings previously that they often relied on the wireless Internet provided at coffee shops to conduct work over the Web, but on Thursday the attorneys went as far as to say that the Starbucks’ Wi-Fi was significantly the most secure connection available.

Air Force Colonel Karen Mayberry, the chief defense counsel for the war crimes tribunal, told the judge that the Starbucks Wi-Fi was “the best bad option that we had,” Jane Sutton reported for Reuters.

Lawyers for the accused 9/11 masterminds asked the court before for more time to prepare their case, citing an inability to work efficiently on the Defense Department’s computer system.

"We're basically put back in the 19th century," Army Major Jason Wright, the attorney for Khalid Sheik Mohammed, said last month. "It takes about five to 10 times what it would normally take to do defense functions.”

Army Colonel James Pohl said at the time, "I understand the serious nature of being able to communicate as a defense counsel," and announced he would decide this week if hearings set for later this year should be postponed to provide attorneys more time.

On Thursday, the lawyers said things haven’t improved with regards to their computer issues.

Mayberry acknowledged that the Starbucks Wi-Fi might be unsecure but, according to Reuters, said she was certain the DoD network had been compromised. She told Pohl that computer files used by the defense have repeatedly gone lost, some were mysteriously altered and referenced instances in which government officials admitted to monitoring the Internet use of defense attorneys.

"It's not speculative or hypothetical. It happened," she said.

A day earlier, another attorney for Mohammed said he was questioned by the government about visiting terrorism-related websites. Mayberry said that the pages lawyer David Nevin and other members of the defense team visited were relevant to their work. On their part, the Defense Department said it has systems in place to flag suspicious activity on the Pentagon’s systems.

Given the issues that have plagued the attorney’s ability to access the Internet so far, though, Mayberry said the problems created “an extremely difficult work environment,” and that “it has become a cumbersome process to complete even the most simple of tasks.”

Nevin, Washington Post’s Billy Keber reported from Gitmo, said US intelligence services “have an extreme interest in information in relation to the men who are the accused in this case.” It waspreviously reported that fake smoke detectors at Guantanamo had been equipped with eavesdropping devices and that defense emails were handed over to the prosecution.

According to Reuters, a logistic overseer said it could take over three months to fix the Pentagon’s system and was a matter of money. Internet technology supervisor Paul Scott Parr testified that the problems may have occurred due to a switch in the email system used by attorneys, or perhaps an attempt to replicate their work on two computers networks — one based near Washington and another near the Cuban prison. Pohl said funding for the issues could be discussed in court in around two weeks.