"The "Crown" is a Private Foreign Power" Chancery, the court of the Lord Chancellor, before 1873; the highest English court of justice next to the House of Lords, comprising a court of common law and a court of equity, now a division of the High Court of Justice; (Am.) a court of equity; a court or office for the deposit of records, to get into chancery: =

The government and judicial system within Australia, at both federal and local state levels, is owned by the "Crown", which is a private foreign power.

Before jumping to the conclusions about the Queen of England or the Royal Families of Britain owning Australia., this is a different "Crown" and is fully exposed and explained below.

We are specifically referencing the established Templar Church, known for centuries by the world as the "Crown". From this point on, we will also refer to the Crown as the Crown Temple or Crown Templar, all three being synonymous.

The Temple Church was built by the Knights Templar in two parts ... The Round Church was consecrated in 1185 and modelled after the circular church of the Holy Sepulcher in Jerusalem. The Chancel was built in 1240.

The Temple Church serves both the inner and Middle Temples (see below) and is located between Fleet Street and Victoria Embankment at the Thames River. Its grounds also house the Crown Offices at Crown Office Row.

This Temple "Church" is outside any canonical jurisdiction. The Master of the Temple is appointed and takes his place by sealed (non-public) patent, without induction or institution.

All licensed Bar Attorneys - Attorners (see definitions below) - in the world owe their allegiance and give their solemn oath in pledge to the Crown Temple.

This is simply due to the fact that all Bar Associations throughout the world are signatories and franchises to the international Bar Association located at the Inns of Court at Crown Temple, which are physically located at Chancery Lane behind Fleet Street in London.

The Inns of Court (see below, The Four Inns of Court) to the Crown Temple use the Banking and judicial system of the City of London - a sovereign and independent territory which is not a part of Great Britain (just as Washington DC) to defraud, coerce, and manipulate the people.

These Fleet Street bankers and Lawyers are committing crimes in Australia under the guise and colour of Law (see definitions for legal and lawful below).

They are known collectively as the "Crown". Their Lawyers are actually Templar Bar Attornies, not Lawyers.

The present Queen of England is not the "Crown", as we have all been led to believe. Rather, it is the Bankers and Attornies (Attorneys) who are the actual Crown or Crown Temple.

The Monarch aristocrats of England have not been ruling sovereigns since the reign of King John, circa 1215. All royal sovereignty of the old British Crown since that time has passed to the Crown Temple in Chancery.

Australia is not the free and sovereign nation that our federal government tells us it is. If this were true, we would not be dictated to by the Crown Temple through its bankers and attornies.

Australia is controlled and manipulated by this private foreign power and our unlawful Federal U.S. Government is their pawn broker.

The bankers and Bar Attorneys in the U.S.A. are a franchise in oath and allegiance to the Crown at Chancery - the Crown Temple Church and its Chancel located at Chancery Lane - a manipulative body of elite banker and attorners from the independent City of London who violate the Law in Australia by imposing fraudulent "Legal" - but totally unlawful - contracts on the American people.

The banks Rule the Temple Church and Attorners carryout their Orders by controlling their victim's judiciary.

The Chancel, Chancery, of the Crown Inns Temple Court was where King John was, in January 1215, when the English barons demanded that he confirm the rights enshrined in the Magna Carta.

This City of London Temple was the headquarters of the Templar Knights in Great Britain where Order and Rule were first made, which became known as Code.

Remember all these terms, such as Crown, Temple, Templar, Knight, Chancel, Chancery, Court, Code, Order and Rule as we tie together their origins with the present American Temple Bar System of thievery by equity (chancery) contracts.

You heard Bush constantly talk about the rule of Law in his speeches what you didn't know is he's talking about this rule of Law "The Vatican Cannon Law", "Admiralty Law operating on the Land" under this No American has any rights in any American Court of Law even under the Constitution it completely null and void the Constitution.

A Foreign Power controlling the country using its judicial structure, and each Attorney General knows it is the reasoning behind the Presidential powers under the Statute of "Executive Order" = the Captain of the ship who under Admiralty Law is judge jury and Executioner:

This will help everyone! 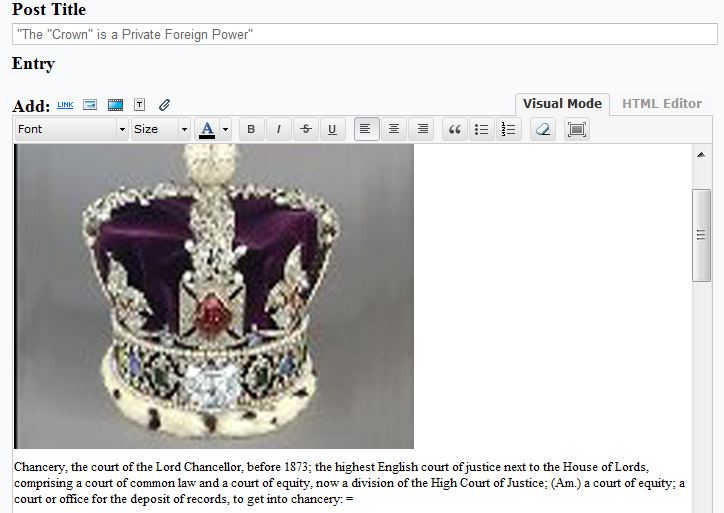 Kerry where you start your post, see where it says ADD on the screen shot? That is a tool bar. 1st thing is to add a link, 2ed is where you click to add a picture, 3rd is where you can add a video, 4th is for Text. Hope this helps~ Pam

Kerry, when a picture is not added @ the top of your post this is how it shows to Facebook. 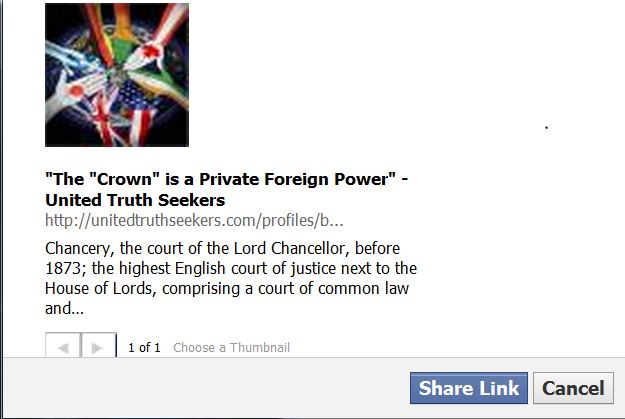 Please strat adding pictures so this shows better for sharing with other networks. Thanks Pam~

In Great Britain there are two separately acting empires - the colonial empire under the royal family and the empire of the Crown. All colonies with a white population (Australia, New Zealand, Canada and South Africa) were under authority of the English government. All other colonies (India, Egypt, Bermuda, Malta, Singapore, Hong Kong, Gibraltar and the Central African colonies) were the property of the CROWN, so-called Crown colonies.

Of course there was co-operation, because the Windsor family is part of and the City belongs to the Black Nonility, During the building of the Empire the British East India company (BEIC) made an immense fortune with the opium trade. The BEIC established the "China Inland Mission" whose main task was to get Chinese cheap labourers dependent on opium to create a market for their wares.

Members of the British royal family were so impressed by the immense profits that they collaborated with the BEIC. They began by taxing the opium producers in India. Hugh amounts of opium were shipped from India on the "China Tea Clippers", and around 13% of India's income under the CROWN came from selling pure Bengal opium in China, supervised by them.

Did you know that between 1876-1878, seven million of India's slaves died of starvation too feed the British armies.

The Queen is the head of the Royal family, with the British colonial empire - with London as its capital - geverned by the Prime Minister and the Cabinet. Like the Vatican being within Rome, there is a separate, independent state within London, the CITY. The City, which is called the richest square mile in the world, occupies just about that area in the heart of London (2.7 km). It is said to have about 4,600 inhabitants and about half a million jobs. The government of the City is The CROWN, comprised of thirteen members and led by the King of the City, the Lord Mayor. Here one finds the richest and mightiest economic institutions of England like the "Bank of England" controlled by the Rothschilds, Lloyd's of London, the London stock exchange, the offices of many international merchant companies and Fleet Street, the centre of news papers and publishing. The CITY does not belong to England. It is subject of neither the monarch nor the government of British Parliament. The CITY is the true government of England, as both the Queen and the Prime Minister are subordinate to the Lord Mayor and listen to him. By the facade of a Prime Minister and a cabinet the impression is given that these decide what happens, yet they are just puppets of the CITY.

P.S. If these families are not the legal mafia then who the hell is?

Kerry I need you to add a picture to the top so this can be sent to facebook. If you have to use google.  Thanks