"The deadly truth about vaccines and flu shots" 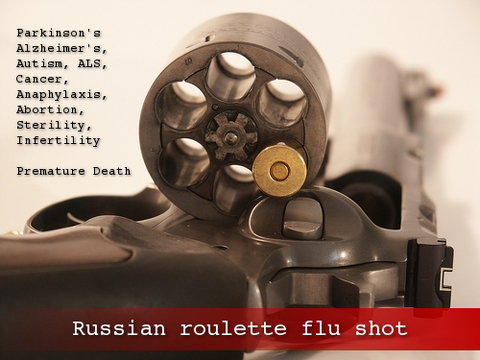 No flu shot or vaccine has ever been manufactured to "cure" the flu. They don't prevent you from getting the flu either. The goal of vaccines is to cause unnatural adverse reactions by injecting poisons and live genetically engineered pathogens directly into your blood stream. Any and all adverse reactions are called a side effect of the vaccine or flu shot by the health care industry and manufacturers. Instead of preventing or curing the temporary flu symptoms they cause disease and premature death. The mercury and aluminum in vaccines and flu shots causes an inflammatory reaction in the brain, spinal cord and vital organs (heart, lungs, liver, bowel, kidney, colon) of your body. The vaccine and flu shot manufacturers intentional develop their vaccines to cause this deadly inflammatory reaction. No vaccine or flu shot can prevent influenza or the flu. Vaccines and flu shots actually inflict healthy people with influenza and other flu viruses. Pharmaceutical companies and the health care system in Canada and the United States are in the business of “treating” (i.e. prolonging the effects of) ailments and disease, not preventing or curing them. They generate $billions in sales by making us sick with poison laden vaccines and flu shots and then prolonging the effects of what they caused, for the rest of our lives.

“Over the past 18 years, the WHO Task Force on Vaccines for Fertility Regulation has been supporting basic and clinical research on the development of birth controlvaccines directed against the gametes or the preimplantation embryo. These studies have involved the use of advanced procedures in peptide chemistry, hybridoma technology and molecular genetics as well as the evaluation of a number of novel approaches in general vaccinology. As a result of this inter national, collaborative effort, a prototype anti-HCG vaccine is now undergoing clinical testing, raising the prospect that a totally new family planning method may be available before the end of the current decade.” - excerpt from “The WHO Task Force on Vaccines for Fertility Regulation. Its formation, objectives and research activities” by P.D. Griffin of the Special Programme of Research, Development and Research Training in Human Reproduction, World Health Organization 1211 Geneva 27, Switzerland

Since 1973 the UN's World Health Organization (WHO) has been looking for ways to use vaccines (the UN smallpox vaccine inflicted the World with AIDS) and other intentionally laced injections (UN's polio vaccine) to drastically reduce the World population - genocide. The US government is implementing this United Nations Organization (UNO, a.k.a Vatican "Fourth Reich" One World government, New World Order) genocidal policy called NSSM 200.

People do not die of the lab created H1N1 or H5N1 virus, they die after being treated for the mild and temporary symptoms. You need only look at the patient's medical charts to see that some type of drug or vaccine was administered just prior to death. Both the H1N1 and H5N1 viruses were man made in a lab as a biological weapon. Both are part of the Vatican UN's NSSM 200 global depopulation (genocide) program.

From the Bulletin of the World Health Organization (Volume 47, p.259, 1972bulletin_1972_47(2)_memo1.pdf) states: Recommendations (3) “An attempt should be made to see if viruses can in fact exert selective effects on immune function. e.g. by depressing 7S versus 19S antibody, or by affecting T cell function as opposed to B cell function. The possibility should be looked into that the immune response to the virus itself may be impaired if the infecting virus damages, more or less selectively the cells responding to the viral antigens. If this proves to be the case, virus-induced immunodepression might conceivably be highly instrumental in prolonging certain virus infections, such as murine leukemia, hepatitis, … ” Immunosuppression involves an act that reduces the activation or efficacy of the immune system = vaccines and flu shots