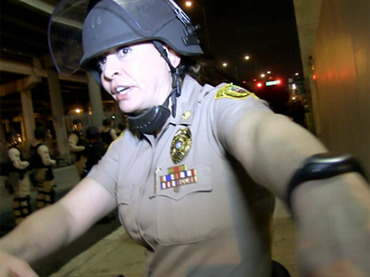 If you want to know what the US Department of Homeland Security has been working hard at lately, leave it to a multimedia journalist from Miami, Florida to lay it out for you: they’ve been busy on Facebook.

Freelance journalist Carlos Miller was documenting a law enforcement raid on the southern Florida’s Occupy Wall Street offshoot, Occupy Miami, when he was arrested earlier in 2012 while filming police — for the third time in just a few years. After investigating why authorities in Miami may have singled him out during the ordeal (in which, he claims, he was only filming the event), Miller stumbled upon some evidence that exposes just why he was targeted by the local branch of the Department of Homeland Security.

Miller was able to obtain through a public records request communication logs from the Miami DHS that reveal what he believes is proof that authorities had been prepared to issue an arrest against him earlier in the year without him even committing a crime. To the DHS, believes Miller, using a camera seems comparable with carrying out an act of terrorism.

Through the public records request, Miller was able to obtain a treasure trove of correspondence that in many instances included his name. One such account was an email communiqué that was issued by the Miami-Dade Police Homeland Security Bureau this past January only eleven hours before law enforcement raided the city’s Occupy encampment and arrested Mr. Miller yet again.

In that email (sent with the subject line “Multimedia information/Situational Awareness”), authorities describe Carlos Miller as a freelance journalist and, ergo, a terrorist in the making. Over the weekend, the reporter recounted in a blog post published to Pixiq.com the events that landed him behind bars during the most recent instance. Also included in the post were the contents of the email that he suggests pegged him as a criminal with a camera.

“Carlos Miller is a Miami multimedia journalist who has been arrested twice for taking pictures of law enforcement.He has publicly posted on social networks that he will be taking pictures today in order to document the eviction,” reads the bulletin.

Along with that warning was a photo of Miller lifted from his Facebook profile. On his own part, Miller says he has no concern with law enforcement circulating photos from his social networking page and acknowledges that he is aware that his profile is viewable to the public. Of concern, however, is how later that day a recipient of that email singled out Miller after he documented the Occupy eviction and issued

Major Nancy Perez was photographed by Miller shortly before she arrested him on January 2. The charges, as he blogged then, were for obstruction of justice and resisting arrest without violence, despite the police report revealing that he was “taken into custody without incident.” To Miller, though, he can’t help but wonder why he was singled out among a pool of reporters. Was it connected with the email sent only hours earlier?

“I find it very troubling that a unit formed to deal with terrorist activities found it necessary to send out an email advising other departments and law enforcement officers that a journalist would be covering a newsworthy matter of public concern,” Mickey Osterreicher of the National Press Photographers Association tells Miller.

It didn’t end there. When Miller first posted a photo of Major Perez on his blog, emails since uncovered reveal that the officer took to the Department of Homeland Security to further complain about Miller. When the DHS responded, they advised her to see if it was legal for Miller to post her photo (it was). From there, the surveillance continued on behalf of both the Miami police and the DHS.

“Have you seen this article?It was posted last night at 9:40pm. Carlos Miller is on his high horse again,” begins another email sent from the Homeland Security Bureau and revealed in the public records request.

Of course, Miller sees no reason to climb back down from his, ahem, "high horse'" especially after not doing anything wrong (he was cleared of his first two arrests stemming from photographing police). That’s why he has released the trove of emails recovered from law enforcement for the public to peruse. Included in those emails, though, is yet another piece to the puzzle that gives Miller reason to worry about how law enforcement is monitoring his every move:

“Carlos Miller stated he intends to to [sic] attend the RNC in Tampa August 27-30, 2012 to record and document the event,” reads another email uncovered which discusses the journalist’s plans to attend this summer’s Republican National Convention. “Proper notifications will be made for situational awareness purposes.”

Those details, says Miller, were discussed during a panel discussion he recently made that was streamed over the Web. It seems as if law enforcement is now looking into more than just Facebook pages.

“Yes, it’s true. Somebody is always watching. They are watching me. And I am watching them,” he writes.