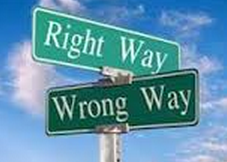 It seems that most people live in a moral grey area, now days.  They think that as long as the ends justify the means, it is good.  The only problem is, there is no moral grey area.  There is only right and wrong.  The people living in the moral grey area,  have been unknowingly manipulated by the people who live in the immoral area.

The lies sold on television convince people, that there is a moral grey area.  By normalizing morally wrong actions, and making people believe that they are pervasive, you can undermine the moral fabric of society.  If you continue to repeat something, people will eventually believe it.

Take religion for instance.  If you had asked most people fifty years ago, "Do you believe in God?", the vast majority would have thought you were crazy for asking that question to begin with, and answered with a resounding yes.  Now fast forward to today.  After fifty years of television and evolution being taught, as fact, and the belief in God has waned to the point, that you could locked up in a mental institute, for defending your belief  in God.  Christians are being demonized worldwide.  Crucifixion has even been practiced, as recently as a month ago.  The Muslim people are also being demonized, and we're all turned against one another.

The thing people need to remember is, we are all humans.   We all bleed red.  It doesn't matter what color, religion, or social status you are, you are no better that any other human.  And to think you are, is morally wrong.  So do you live in the moral grey, or do you know right from wrong?  I think we all need to take a long hard look at our answer to this question.

The only thing it takes for evil to triumph, is for good people to do nothing!

This blog post is dedicated to my grandmother. She died on this day in 1989. I love you grandma. Thank you for teaching me the difference between right and wrong. RIP Grace Heath.