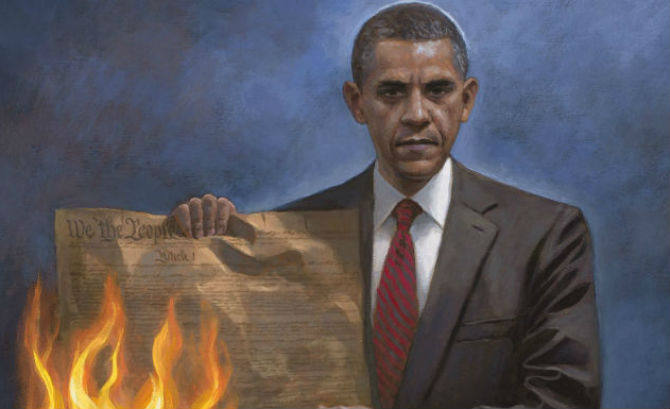 What does a president have to do to get impeached? After Lincoln’s assassination, Johnson became president and was impeached for simply removing the Secretary of War from his cabinet; Nixon resigned rather than be impeached for the Watergate cover-up; and Bill Clinton was impeached for perjury and obstruction of justice. Now enters Obama who has lied repeatedly and usurped authority he does not have and has now violated the authority of Congress by declaring 5 million illegal aliens to be free from deportation as the law requires. He has arrogantly, audaciously, and asininely stomped on the Constitution with the hobnailed boots of tyranny. If that does not demand impeachment, nothing does.

Obama has generous support for amnesty from the wealthiest liberal non-profits in the nation such as the Ford Foundation, the Carnegie Corporation of New York, the Open Society Foundations of the financier George Soros, and the Atlantic Philanthropies. For more than ten years those groups have given more than $300 million to immigrant organizations, “including many fighting for a pathway to citizenship for undocumented immigrants.” Those groups and others are using money from U.S. sources to destroy America as we know it.

Even in normal times, it is insane for a nation to have open borders where anyone for any reason can enter without restrictions. Then when you consider a time of war, national pestilence, or terror, it is doubly insane to permit unrestricted entry into a nation. That’s about where the U.S. is today. With an astronomical increase in crime; with burgeoning welfare roles; with cities and states whining about empty coffers; with hundreds of thousands of Americans out of work and more to follow; we still have almost open borders. We might as well put up a huge sign on our southern border: “Terrorists and other illegal aliens Welcome. Follow the arrows to Tucson.” Maybe an additional sign promising “free medical care and education.”

Open border fanatics tell us that “The U.S. had open borders from its inception until 1882. It makes one wonder what the Founding Fathers would think of us today.” However, that is not the whole story because in 1882 there was much of America unexplored, uninhabited, and unavailable. We needed the people–farmers, smiths, merchants, salesmen, trappers, cobblers who came and fell in love with their new nation, learned English, and melted into the pot. But the pot is not melting today. It is now a salad bowl where many different peoples do their own thing and have no interest in the general welfare.

Treason is “any attempt to overthrow the government or impair the well-being of a state to which one owes allegiance.” That means anyone, including leading politicians, who seeks to weaken our nation, worsen our economy, or wreck our system is a traitor. We must leave room for honest disagreement as to how to solve a problem but to disassemble a defense that has been utilized for a hundred years qualifies as treason.

Thousands of illegal aliens cross into the U.S. from Mexico carrying drugs, disease, and destructive plans to our nation. Others want to pick tomatoes and other vegetables; however if tomato pickers can slip in, so can terrorists. Yet, we have major politicians (including President Obama) who are so unconcerned, they are determined to give amnesty to those gatecrashers already here. That would be an invitation for even more illegals to rush north.

The current very negative consequences of immigration are largely because more recent groups aren’t learning English at the same rates as their predecessors. Harvard economist George Borjas suggests that “it’s not very costly anymore” for new immigrants if they don’t learn English because so many of them have formed communities that insulate them from other Americans. Therefore, they don’t need to learn English since they can function with each other. Illegal aliens get lost in a huge group of their own kind and don’t need to melt into the pot. They sit, soak, and sour in the salad bowl.

We should send a loud message to all politicians that it is time to take charge of our borders to clean up the mess: Build the wall; no amnesty; no more guest workers until the economy stabilizes; no more immigration for five years; fine businesses who hire illegal aliens; send the gate crashers home; arrest the “coyotes” who get rich smuggling illegals across the border; demand that our “friends” in Mexico stop playing the hypocrite and close their northern border as they have their southern border. It’s past time to get started.

First, we impeach the President.