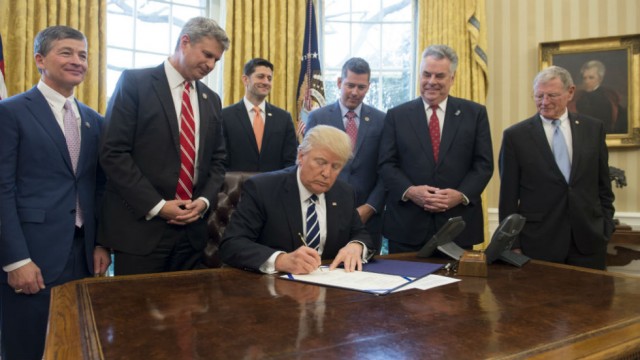 The bill quashes the Office of Surface Mining's Stream Protection Rule, a regulation to protect waterways from coal mining waste that officials finalized in December.

The legislation is the second Trump has signed into law ending an Obama-era environmental regulation. On Tuesday, he signed a Congressional Review Act (CRA) resolution undoing a financial disclosure requirement for energy companies.

Both the mining and financial disclosure bills are the tip of a GOP push to undo a slate of regulations instituted in the closing days of the Obama administration. The House has passed several CRA resolutions, and the Senate has so far sent three of them to President Trump for his signature.

Regulators finalized the stream protection rule in December, but they spent most of Obama’s tenure writing it.

The rule is among the most controversial environment regulations the former administration put together. The coal mining industry said it would be costly to implement and lead to job losses across the sector, which is already suffering from a market-driven downturn in demand for its product.

At the signing, Trump called the regulation "another terrible job killing rule" and said ending it would save "many thousands American jobs, especially in the mines, which, I have been promising you — the mines are a big deal."

"This is a major threat to your jobs and we’re going to get rid of this threat," he added. "We’re going to fight for you."

Republicans on Congress, especially from Appalachia, supported that argument and sought to block the rule several times before finally passing the CRA resolution this month.

“In my home state of Kentucky and others across the nation, the stream buffer rule will cause major damage to communities and threaten coal jobs,” Senate Majority Leader Mitch McConnell (R-Ky.) said before the bill passed. “We should heed their call now and begin bringing relief to coal country.”

Environmentalists supported the administration rule, saying it would protect waterways from pollution and preserve public health. They have criticized the GOP for repealing environmental rules in the name of supporting coal mining jobs, but doing little else to help displaced workers in mining areas.

“If you want to help miners, then come address their health and safety and their pension program,” Sen. Maria Cantwell (D-Wash.), the ranking member of the Energy and Natural Resources Committee, said during floor debate on the measure.

“You can protect the coal industry here with special interests and the amount of lobbying they do, or you can step up in a process and have a regulation that works for the United States of America so the outdoor industry and sportsman and fishermen can continue to thrive.”

The Senate this week sent Trump a CRA resolution blocking a gun sales regulation. Members could soon take up a measure undoing a methane rule for natural gas drilling operations on public land.