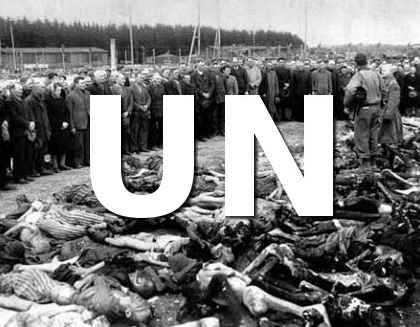 While investigating the WHO and UN role in the biological weapons attack called the A-H1N1 (Swine Flu) pandemic of 2009, criminal intelligence (CI) agents from Canada and the US have stumbled upon a covert and sinister plan to kill off as many as 3 billion people by food malnutrition. The organization that is responsible for preparing for the murder of 3 billion people is called the Codex Alimentarius Commission. It was established in 1963 by the World Health Organization and the Food and Agriculture Organization of the United Nations. Their officially stated purpose is to develop international food standards to protect consumer health and to facilitate fair trading practices in foods. Today, there are 181 member governments including Canada. CI agents have uncovered the real purpose of this WHO / UN organization – to murder 3 billion people. How will they murder some 3 billion people?

It was Henry Kissinger, who in 1974 conceived the idea of the food genocide to control world population – less people to consume world resources – more for the rich nations (elites) to exploit the sources of the world to satisfy their greed. On December 10, 1974 the US National Security Council under Henry Kissinger prepared a classified study ‘National Security Study Memorandum 200 (Full text of NSSM 200 (governmental source – pdf file)) – which falsely claimed that the worldwide population growth poses a great threat to US national security interests. 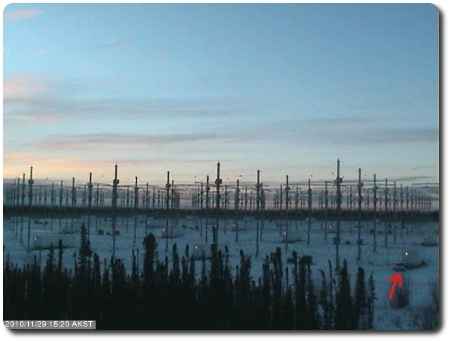 US Air Force weapon of mass destruction military installation called HAARP – live cam image from November 29, 2010. Red arrow points to military truck parked at installation and lights are clearly shown to be on at each of the trailers. HAARP is active and is responsible for causing recent earthquakes, volcanic eruptions, heat waves and monsoon rainfall that caused major flooding.

Classified UN documents reveal that 1 billion people will be killed by starvation as UN trade agreements and WHO health moratoriums will forbid any country from selling and exporting any food to targeted regions for depopulation. Starvation of 3 billion people has already begun as the United States has been using its weapon of mass destruction called HAARP to control, alter and intensify the weather of the targeted nations. This past summer HAARP was used to create a heat wave in Russia, resulting in the near complete destruction of its crops. Also this past summer the US used HAARP to cause the massive flooding in China and Pakistan – an attempt to wipe out the crops of China and Pakistan resulting in the mass starvation of their populations. 2 billion more will be murdered by diseases and illnesses associated with malnutrition from crop destruction, pasteurization and irradiation. The Codex Alimentarius Commission will be responsible for causing disease and illness from malnutrition by implementing the 2 latter killing instruments. The Codex Alimentarius Commission has begun this process by labeling the life sustaining nutrients (vitamins, minerals and enzymes) in our foods as poisons. Now that nutrients are classified as poisons they have been given the authority by the United Nations to eradicate all nutrients in our foods. They have already begun the eradication process by pasteurizing (exposing to high heat) and irradiating (exposing to radiation) all of our food. Milk was the first to be targeted for eradication as milk is the most important life sustenance on Earth. It is packed full of vitamins, minerals and enzymes. All essential for keeping us healthy and alive. Next was eggs. Another very important food that keeps us very healthy and alive.

With the recent false declarations of E. coli contamination in fruits and vegetables the member nations of The Codex Alimentarius Commission have been ordered to pasteurize or irradiate all fruit and vegetables. Why? Pasteurization and irradiation destroys all of the nutritional value of our food. These processes don’t eliminate the microorganism they claim they are killing in our food. It kills the organisms and everything else including the vitamin, mineral and enzyme content of our food. Furthermore pasteurization and irradiation doesn’t clean or filter out the bad organisms in our food it just kills them and when we drink or eat pasteurized or irradiated foods and beverages we are consuming the dead, rotting and disease and illness causing bodies of the organisms. Because all of the vitamins, minerals and enzymes have been destroyed by pasteurization and irradiation your body can’t stop or fight off the disease and illnesses caused by consuming the dead and rotting organisms.

Who is behind this mass murder of 3 billion people?

In the investigation of the WHO and UN plans for murdering 3 billion people there is one region of the World that seems to have been exempted. The only region that is not being targeted for mass depopulation are the countries that made up old Europe. Why everywhere else but old Europe. Because, according to information written in the classified UN documents, Canada, the US, China, Russia, Pakistan, the Middle East and Africa are nations populated with people who are considered inferior races. The only superior race of people is the Aryan Race. Adolf Hitler started WWII to reinstate the Aryans as a master race of Indo-Europeans. The Aryans are supposed to be Nordic in appearance and directly ancestral to the Germans. During WWII the Nazi SS officers and soldiers were put in charge of slaughtering all inferior races of people by whatever means possible, including; war, famine, poison, biological diseases and mass executions. Today the UN has been put in charge of slaughtering as many as 3 billion people.

Very few people realize that the UN was created by former high ranking politicians and war criminal officers of Nazi Germany. Even fewer people know that an International organization existed during WWII and it was that League of Allied Nations who were responsible for the defeat of Adolf Hitler and Nazi Germany. Immediately after WWII the League of Nations was destroyed by the Nazi Germans in retaliation for defeating them in WWII. In its place the Nazi Germans formed the UN. The UN (the negative prefix un means – Opposite of; contrary to: unrest.) was formed to bring about global unrest. Once global unrest was achieved a New World Order governed by “The Four principles” (The Fourth Reich) – * One Leader * One Budget * One Programme and * One Office would be implemented. To have an understanding of the clandestine agenda of the UN you must have an understanding of the meaning of Reich. Reich is the territory or government of a German state, as the Holy Roman Empire (the Vatican), or First Reich , from 962 to 1806; the German Empire, or Second Reich, from 1871 to 1919 (Germany’s WWI); the Weimar Republic, from 1919 to 1933; and the Third Reich, from 1933 to 1945 (Nazi Germany’s WWII). The Nazi formed United Nations launched the “Delivering as One” initiative in 2007 – the Fourth Reich. Today Germany is once again the leader of the new and Fourth Reich. A former Nazi German Youth – Joseph Aloisius Ratzinger ( served the Third Reich for at least 4 years) is now leader of the Vatican – the original or First Reich.

The Nazi war criminals also formed many of the International and national organizations we have today, including NATO (created by commanding officers and ex-multinational conscripts that made up the German Waffen SS army units), the CIA (created by former Gestapo agents to spy on, sabotage, torture and kill agents, military personal and political figureheads of the Soviet Union ), the WHO (created by former Auschwitz death camp scientists and physicians), NASA (created using former Nazi rocket scientists who were smuggled into the US in Operation Paperclip).

Now that our governments have been ordered by the Nazi UN to begin pasteurizing and irradiating every consumable food the only question left to ask is “how much time do we have left before we starve to death from eating?”

A viewer just reminded me of a very important historical fact that relates to this story. I was reminded of the fact that the Royal Family of England, namely Queen Elizabeth II and the House of Windsor, are actually descendants of the German arm of European Royalty – the Saxe-Coburg-Gotha family. Due to anti-German sentiment in the United Kingdom during the German Reich World War I, George V of the United Kingdom changed the name of his branch from Saxe-Coburg and Gotha to Windsor in 1917. The same happened in Belgium where it was changed to “van België” (Dutch) or “de Belgique” (French). The House of Saxe-Coburg and Gotha is a German dynasty, the senior line of the Saxon House of Wettin that ruled the Ernestine duchies, including the duchy of Saxe-Coburg and Gotha. The House of Wettin is a dynasty of German counts, dukes, prince-electors (Kurfürsten) and kings that once ruled the area of today’s German states of Saxony, the Saxon part of Saxony-Anhalt, and Thuringia for more than 800 years as well as holding at times the kingship of Poland. Agnates of the House of Wettin have, at various times, ascended the thrones of Great Britain, Portugal, Bulgaria, Poland, Saxony, and Belgium; of these, only the British and Belgian lines retain their thrones today. This historical fact means that Germans rule the United Kingdom, Canada and a host of other Commonwealth Nations. The head of state in Canada is the sovereign or Queen of Canada (a German from the House of Saxe-Coburg and Gotha) . The Queen’s powers are exercised by the Governor General of Canada except when the Queen is in Canada. The Governor General, like the sovereign or Queen, is not political and remains above politics. That would suggest that Canada and other Commonwealth Nations are servants of the German Reich.