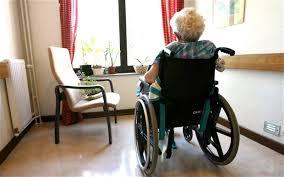 An Alberta hospital group that just opened two "Angel Cradle" baby boxes for the safe drop-off of unwanted newborns has expanded the program to allow people to drop off unwanted old people.

"Far too many babies and oldies are being abandoned in dumpsters," said Dr. Nina Swan of Covenant Health, the Catholic-based, government-funded health care adminstration that operates the two hospitals hosting the programs.

"Starting immediately, in addition to freshies (newborn babies), you can drop off your grandma, grandpa, aunty, uncle, or neighbour as long as they are either continent or diapered," said Swan.

Called Angel 65, the new program for seniors has drop-offs with exterior doors next to the hospitals' Emergency Rooms. Inside the door, a small room is outfitted with a La-Z-Boy Recliner Rocker, strawberry and vanilla bottled Ensure, and a radio playing CBC. Once the surrendered senior is inside the room, an alarm goes off inside the hospital to alert staff, and the door locks so the drop-off cannot leave and wander the streets.

Like the Angel Cradle program, the Angel 65 drop-off areas are considered safe havens and police have agreed not to question, videotape or use facial recognition technology on anyone leaving the area.

"This follows on the heels of the increased two-baths per week announcement for Seniorites in all Alberta long-term care facilities," said Minister of Health Fred Horne. "Plus we fixed the whole frozen food meals thing and now this program shows we honestly do care about babies and all our dear oldtimers."

"So when a slightly used person can't chew their pork chop anymore, you can dump 'em?" spluttered NDP party leader Brian Mason (59). "This is outrageous. This is Alberta's iceberg."

Premier Alison Redford (48) was unavailable for comment but social media has weighed in with thousands of hits on the government site http://www.health.alberta.ca/seniors.html .

"Babies and old folks are now expendable?!? I'm 64 and this scares me. I can't believe we've come to this," reads a tweet from luvisallthereis.

"do i bring his extra false teeth?" asked another tweeter.

The two old people drop-offs are open now and are located at Grey Nuns Hospital and Misericordia Hospital, under the blue neon Angel 65 sign adjacent to the Emergency entrances.

Appointments are not necessary.