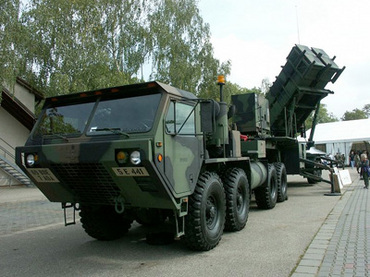 Israeli and American officials put plans for a massive missile drill mysteriously on this month, but now the exercise, originally slated for this spring, will be scheduled for October 2012.

The drill, which will also signal a surge of American troops to Israel by the thousands, will mark the biggest test of its type for both nations. As tensions worsen between the US and Iran — as well as Israel and its Islamic Republic neighbor — Tehran authorities fear that the exercise will try out more than just the missile capabilities of the allies. Also being put to the test is Iran’s patience.

The United States has already equipped almost every nation surrounding Iran with weaponry and mobilized a fleet in the adjacent Strait of Hormuz. The postponement of the exercise, which RT reported last week, was viewed by some to be a response from Israel over America’s lack of initiative in actually putting the heat on Iran. Overseas news outlet Debka, which has close connections with the Jewish state’s intelligence community, suggested that the snag in the plans occurred after Israel grew irritated at America’s hesitance to bite, instead only barking at Iran. Israeli Deputy Prime Minister Moshe Yaalon called the Obama administration "hesitant" earlier this month, which was followed by a warning only a day later by the nation’s Foreign Minister Avigdor Lieberman, in which he urged the US to "move from words to deeds.”

At the time, one Israeli authority speaking under condition of anonymity told Reuters, “It’s for a host of reasons, mainly logistical, but not the reason you cited [tensions with Iran].”

Now after a brief delay, America will send thousands of troops and its anti-missile defense systems to Israel, albeit a few months later than planned. With the exercise back in the books, it could mean that an eventual war between the US and Iran is still in the works — and now the world has a timeline to see it through.

Speaking off the record, both US and Israeli authorities tell the JTA news wire that tensions with Iran indeed played a role in the rescheduling, but declined to say how exactly. Captain John Kirby, a spokesperson for the US Department of Defense, tells the outlet that the plans were put on hold for routine reasons of wanting “optimum participation” by both the US and Israel.

“We remain dedicated to this exercise and naturally want it to be as robust and as productive as it can be,” adds the captain.

Parts of the program involve a troop surge in the thousands as well as the deployment of America’s Theater High Altitude Area Defense (THAAD) missile system and the ship-based Aegis system overseas. Israel’s own Arrow, Patriot and Iron Dome missile systems will work in cooperation with their US counterparts. The US troops, estimated to be at a tally of 3,000, could arrive in Israel as early as next week. They will join forces with around 2,000 Israeli’s involved in the country’s own missile program.

Earlier this month, the US deployed 15,000 troops to the nearby nation of Kuwait. Israel has also in recent weeks increased its defense budget to the tune of $700 million.