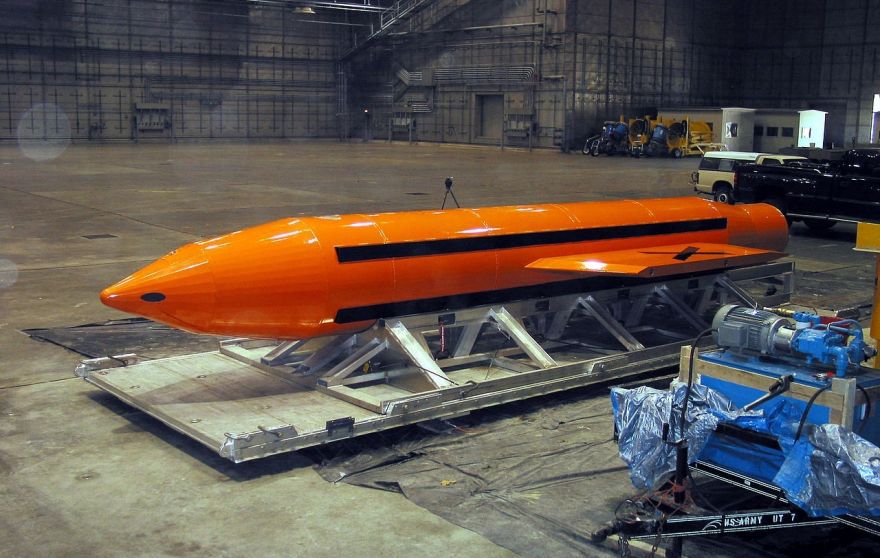 The U.S. military dropped its largest non-nuclear bomb on an ISIS tunnel complex in eastern Afghanistan on Thursday, a U.S. defense official confirmed to Fox News. The GBU-43B, a 21,000-pound conventional bomb, was deployed in Nangarhar Province close to the Afghanistan/Pakistan border. By comparison, each Tomahawk cruise missile launched at a Syrian military air base last week weighed 1,000 pounds each.

The Massive Ordinance Air Blast was first tested in 2003. (DOD)

The MOAB — Massive Ordnance Air Blast — is also known as the “Mother Of All Bombs.” It was first tested in 2003, but hadn’t been used in combat before Thursday.

Pentagon spokesman Adam Stump said the bomb had been brought to Afghanistan “some time ago” for potential use. The bomb explodes in the air, creating air pressure that can make tunnels and other structures collapse. It can be used at the start of an offensive to soften up the enemy, weakening both its infrastructure and morale.

“As [ISIS’] losses have mounted, they are using IEDs, bunkers and tunnels to thicken their defense,” Gen. John Nicholson, commander of U.S. forces in Afghanistan, said in a statement. “This is the right munition to reduce these obstacles and maintain the momentum of our offensive against [ISIS].”

President Trump told media Thursday afternoon that “this was another successful mission” and he gave the military total authorization.

Trump was also asked whether dropping the bomb sends a warning to North Korea.

“North Korea is a problem, the problem will be taken care of,” said Trump.

WHAT IS THE ‘MOTHER OF ALL BOMBS’?

The MOAB had to be dropped out of the back of a U.S. Air Force C-130 cargo plane due to its massive size.

“We kicked it out the back door,” one U.S. official told Fox News.

Ismail Shinwari, the governor of Achin district, said the U.S. attack was carried out in a remote mountainous area with no civilian homes nearby and that there had been no reports of injured civilians. He said there has been heavy fighting in the area in recent weeks between Afghan forces and ISIS militants.

Hamid Karzai, the former president of Afghanistan, posted on Twitter that he condemned the attack “vehemently” and “in [the] strongest words.”

“This is not the war on terror but the inhuman and most brutal misuse of our country as [a] testing ground for new and dangerous weapons,” Karzai said. “It is upon us, Afghans, to stop the #USA.”

The strike came just days after a Green Beret was killed fighting ISIS in Nangarhar, however, a U.S. defense official told Fox News the bombing had nothing to do with that casualty.

“It was the right weapon for the right target, and not in retaliation,” the official said.

The U.S. estimates that between 600 to 800 ISIS fighters are present in Afghanistan, mostly in Nangarhar. The U.S. has concentrated heavily on combatting them while also supporting Afghan forces battling the Taliban.

In August, a company of nearly 150 Army Rangers killed “hundreds” of ISIS fighters in Nangarhar, though five of the Rangers were shot. Some weapons and equipment, including communications gear and a rocket launcher, were also left behind following the operation.